Are there any guidelines out there as to what could be used to effectively convey competency at x, where x is a professional ability of some kind?

At the moment I'm dividing skills up by core and other but this is simply a text label. Have any of you UX gurus any suggestions for how best to do this? I flirted with the idea of a Venn diagram of sorts but it becomes unreadable very quickly.

Other things that have crossed my mind are sliders or ratings stars/thumbs ups but I don't know what best practice is and would love some guidance from the professionals in this arena.

The wireframe below represents my first efforts at using the tool so please be gentle ;-)

Since it is a self-assessment it is best to go simple with the stars across each skill type. You 7 stars... the first star on the left being "Noob" the 4th star being "amateur" and the 7th star being "God or Rock Star". That way, the user an self assess his level with a more quantifying degree.

I'm assuming that you want to rate a professional's competency in a skill against the spectrum of possible competency in that skill. If that is the case, you may want to define specific levels (naïve, beginner, intermediate, advanced, master, guru, rock-star) with implied communally-held definitions. The skill name can then be followed by the ascribed competency level, perhaps using a smaller, lighter font to break up the two adjacent data elements (skill-name, and competency-level).

If on the other hand, you want to divide a professional's competency in a given skill against their competency in other related skills, a sorted list from strongest to weakest skill might be more appropriate.

-- EDIT in response to comments --

You should take a look at how linkedIn does this. 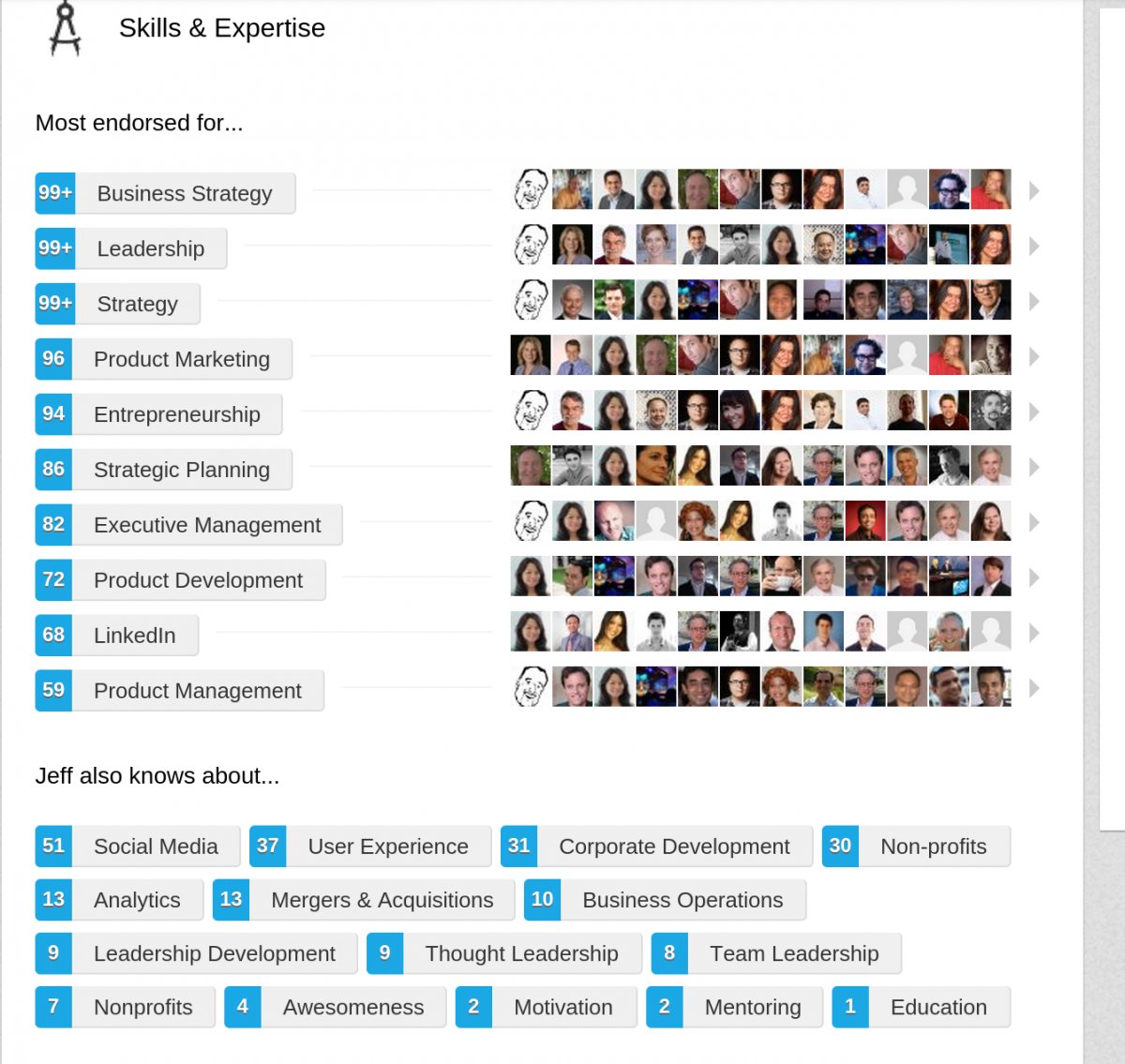 Their competency ratings come from other users, and they make that transparent by showing who those "99+" endorsements came from. This makes the competency feel more real and believable. I'm not sure where your ratings will come from, but having a visual that's directly connected to the data is pretty effective, and makes it feel concrete. If you want the skills to be divided up, I would stick to something visually straight forward, something in the realm of a bar or line graph.

I don't know if this will give you any ideas but I built a tool to try and visualize which skills were lacking (if any) in a group of designers. Each designer could basically condense their UX skills into a square icon.

You can play around with it here...

Not the answer you're looking for? Browse other questions tagged gui-design best-practice or ask your own question.

0
How to convey element dimensions to casual users?
1
How do I quickly convey the concept of organising the cloud using images?
1
How to indicate top level menu not clickable?
1
Design idea for Multiple level pages
4
User access level grid - idea for gui
0
How to convey set inclusion and exclusion?
0
Simplifying menu bars into single level to save screen real estate
1
Multi-level expanding child rows in table
1
How to improve 3rd level navigation selection