I have found quite many discussions around country and language selection but none of them was mobile specific. So I'd like to open a new discussion around that ...

I'm currently designing a mobile site that has around 60 country versions. A country version is not only a language variant but each has individual contents.

Users will be automatically directed to a country version. Still, there will be a country switch.

I was thinking of different options but I'm not sure if I already came across a good or even optimal solution. Could you think of others? 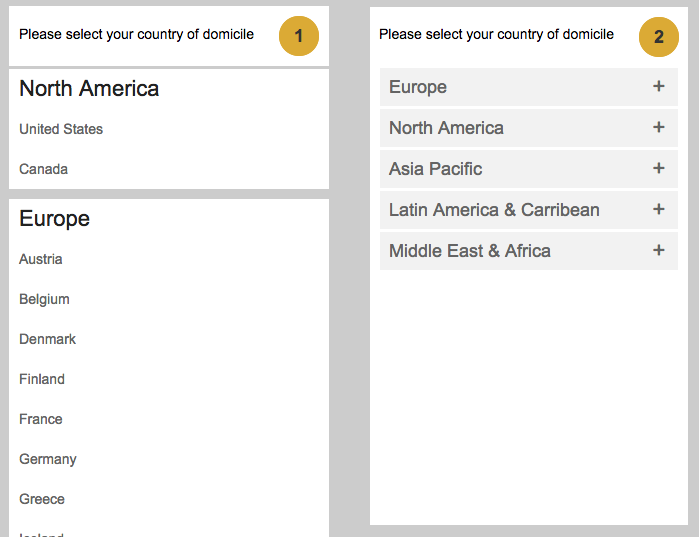 A map. It's fast, and I think it is more recognition than recall. Almost every user of technology can locate their country in a map (even if they don't know in which continent is located).

Something like this but with zoom. You can make the first click zooms (and maybe provisionally selects); and consecuent clicks selects unless there are many countries under in the same zone (then zooms again). Also the user must can zoom out, and drag to move.

Not the answer you're looking for? Browse other questions tagged mobile localization country or ask your own question.

11
Why do mobile users give up on the mobile site and switch back to the full site instead?
5
Mobile Site Footer Location
0
Disabling text selection on mobile
1
Share buttons on mobile site?
1
Choosing Language on Mobile Game
18
Best way to find and select a country
3
Best approach for managing country selection in e-commerce shop-front
0
Nestled Selection on Mobile
34
Telephone input (+ country code)