Is it right to use the word "Collapse" to describe what this button do or "Minimize" is more correct? 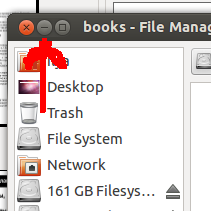 What the difference in meanings of words "collapse" and "minimize" in context of computer program interfaces?

UI engineering/design worldwide has already established the meaning of collapse and minimize, therefore we should not disagree with their established usage.

So that windows are iconized onto the alternative iconization area.

In the picture that you showed, clicking on that symbol would normally lead to minimization of the window.

Double clicking on the title bar is also the accepted tradition of toggling between maximizing and unmaximizing the window.

However, there are applications which would toggle between collapsing and uncollapsing its window rather than maximizing and unmaximizing it, when its title bar is double-clicked.

According to MSDN's reference on Window Features,

Expand / collapse is a control pattern used in other controls such as ComboBox, SplitButton and TreeItems, but not in windows.

A quick look at my own desktop and the software currently opened shows me that Windows and Google Chrome use Minimize.

To answer the question as to why this is, I believe the following heuristic from Jakob Nielson will help:

Match between system and the real world

The system should speak the users' language, with words, phrases and concepts familiar to the user, rather than system-oriented terms. Follow real-world conventions, making information appear in a natural and logical order.

Collapse is a term I see a lot in programming languages. But the term itself will be more difficult to relate to as a non-programming user than minimize.

an instance of a structure falling down or giving way.

reduce (something, especially something undesirable) to the smallest possible amount or degree.

Looking at the behavior of a window, calling it minimize seems a better match than collapse. Although I don't have any research to back this up.

Not the answer you're looking for? Browse other questions tagged terminology collapsing or ask your own question.

9
Help or support?
12
Is it a problem if a word describing a software action has additional controversial meanings in the real world?
1
A general term for objects a user can interact with and how they are used
12
Should we re-think the use of the word "Save"
3
Content Performance
2
Define the word "parse" for a non-technical user in 1-2 sentences
2
what is the best wording to describe a link which opens/closes table in a horizontal way
3
conceptual model, mental model, roadmap and framework
1
What's the correct term, 'Clone' or 'Duplicate'?