Is there any solid experimental evidence on how successful infographics are at getting the viewer of the graphic to think about the data presented, understand it, and retain that understanding, relative to other types of data presentation?

What is in scope for this question?

What is out of scope?

What is an infographic?

The audience under consideration

I'm thinking specifically of an audience that has sufficient visual ability to read the infographic in its graphical form, and is sufficiently literate and numerate to understand what's contained in it. 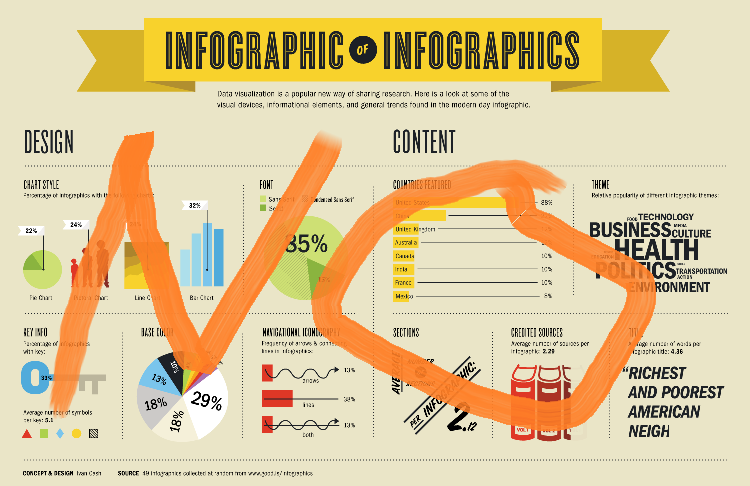 (original from Kathy Schrock's guide to everything. I don't think this is any worse than a thousand other examples of the genre)

(I have at least found a little peace with infographics now, by thinking of them as a tiny, stupid version of academic conference posters.)

A recent (2013) paper from the information visualization community looked at a related problem, namely: "What makes a visualization memorable?" They reasoned that:

They conducted the largest scale visualization study at the time, using 2070 single panel visualizations, and collected memorability scores through Amazon Mechanical Turk. The did note that their study:

Their results aligned with those from previous studies. Specifically, they found that

"visualizations with low data-to-ink ratios and high visual densities (i.e., more chart junk and "clutter") were more memorable than minimal, "clean" visualizations. It appears that we are best at remembering "natural" looking visualizations, as they are similar to scenes, objects, and people, and that pictorial and rounded features help memorability."

The paper is really interesting, in that it covered different categories of visualizations, from traditional infographics, to those found in scientific publications, graphics generated by governments/world organizations, and the news media. I would recommend that you read it in full. You may also be interested in some of the references in their background section that point to "chart junk", and the surprising findings (at the time) of its effectiveness.

Funnily enough, here is an infographic on why info-graphics are successful in todays web space, with some actual statistics behind it:

However in summary they are utilized extensively because:

Tufte has spent his entire career on this topic. If you're not familiar with Tufte, you should be:

But note that what he talks about (visualizing data) is not necessarily the same thing as the 'infographic internet trend' of the past 4 years or so. The latter rarely has anything to do with meaningful data communication and everything to do with click bait, spam, and gray-hat SEO.

If you see it on Facebook, it's likely not a graphic put together to produce intelligent interpretation of complex data, but rather just some eye candy to get you to click a link.

OK, based on your comments, I think you're referring to the latter. The types of infographics you see posted to facebook and twitter and the like over the past several years.

I don't know if there is research on data retention based on this particular infographics, but I highly doubt it--as that is not the purpose of these infographics. They are meant to be visual eye candy and entertainment. The end-goal is to get you to click their link. It's advertising.

As for Tufte, there's nothing outdated about his work. Besides the fact that he's still publishing work, he focuses on the broader issue that you're asking about...using visuals to help "think about the data presented, understand it, and retain that understanding".

If you haven't read his books, and if you are truly interested in this topic, do go read them. It's an invaluable set of resources for anyone interested in displaying data visually.

The problem we have today is that over the past several years, we've just been bombarded with really poorly designed infographics. Lots of them are full of irrelevant data, bad (or completely incorrect) visualizations, and (a term Tufte coined) plenty of "chart junk" and irrelevant eye candy.

Which--to be fair--is maybe their purpose. Again, those latter types of infographics are less about communicating complex data and more about marketing.

I consider this a loaded question because the extent to which infographics (and data visualizations) can be useful depends on how well they are conceived and executed.

So your question about evidence for:

I did a Google search for 'cognitive retention of infographics' and, by following the link to 'Scholarly Articles', found that the top three articles relate to your question.

The second stated that infographic instruction was an effective instrument to help the learners in the study.

Not the answer you're looking for? Browse other questions tagged info-visualisation user-engagement graphics or ask your own question.

2
Infographics: show relationships between two sets and within them
20
How to showcase UX work?
2
Showing progress on activity over large time period
5
Do you use infographics in UX?
5
Visualize popular routes/connections