I have a mobile app where the user has "assignments" to do in a specific date/time. Naturally, the list is sorted chronologically from first to last: 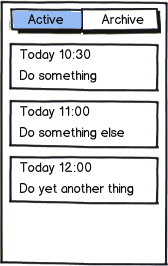 The user might want to see an archive of assignments already done. I decided to display them in reverse chronological order since the user most likely wants to see a recent assignment. The list also has infinite scrolling to see older assignments. 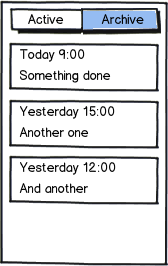 Will the users be confused that the sorting order is reversed in the archive? Is there a better way to sort the items?

If you define the sorting criteria as the absolute time difference from now, then your sorting is the same for both active and archive.

People use the spatial metaphor for time. The further away the more distant is the event in the future or the past, with the reference to now, e.g. people use the phrase "way back" to refer to things that happened long time ago.

I believe users will very quickly understand and use effortlessly your sorting for both active and archive.

This is fine. For two independent lists.

Look at it the opposite way round:

If Active had the first item as the one furthest from now, that would not make good sense.

If Archive had the first item as the one that happened longest ago, that would not make good sense either.

The longer the time between now and either extremity, the less sense it would make.

Therefore, the inverse (which is what you are proposing) makes the most sense.

Improvement 1: I would suggest more friendly terms for the two lists, that may help even further. The main problem is Active and Archive are two words that look very very similar and yet have opposite meanings in your scenario.

Just for example: Coming up and Past events

Improvement 2: An alternative to two lists in opposite directions is to have just one list which scrolls in a timeline vertically or horizontally depending on device orientation.

Clicking on coming up takes you to the point in the time line where events coming up are below or off to the right, but with a sliver of the most recently passed event visible.

clicking on Past events scrolls so as to show most recent past events above or to the left, but with a sliver of the first upcoming event visible.

This way there's one list, one direction of flow from past to future, one moving focal point (i.e. now) but two directions to explore in: before now and after now.

By way of example, whilst still keeping the essence of the existing design: 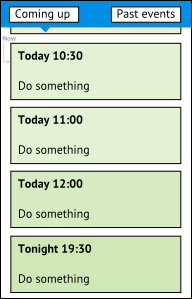 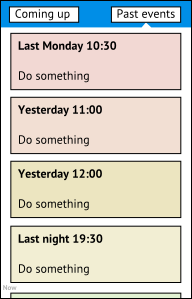 Note the additional hint for the direction of events given by the arrow below each button!

I think the approach you're using is great, but what I'd do is give the user the option to switch between reverse order and 'normal' order. That way, the user can't be confused.

Make sure the reverse order option is highlighted so the user knows they can switch and reverse order is the default at the moment.

Not the answer you're looking for? Browse other questions tagged mobile-application sort or ask your own question.

16
Which comment sorting order makes more sense on blogs?
2
In a sortable table, should sorting by a column of identical values result in any change in ordering?
2
Ordering a short list of images with HTML input elements
2
Should sorting be part of the search query?
3
Alternatives to "Oldest" for Sorting Order
0
In what order should navigation bars links be?
2
How should different content types be ordered on a list based page - specifically news and events
5
combining cards UI and buttons
3
Opposing sorting direction
1
Product sorting order in the shopping cart