In mobile, using a simple right chevron in a list item, most people globally understand clicking that element to bring them to a new page.

But with modals, the standard launching platform/object tends to be a button. But a button is ambiguous.

I'd like to use a chevron within the modal's launch button, but that feels misleading since you're not actually going to a new page. Is there a better symbol for conveying opening content in a modal?

In particular, the type of modal I want to use is the style that Airbnb uses: 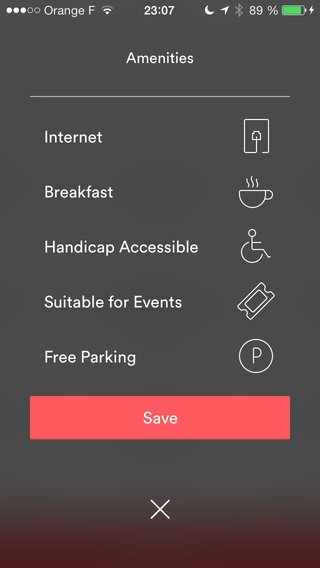 @EvilClosetMonkey I'm not sure if this still applies to this article since it feels less like a dialog, yet still has the animation and see through background that lets the user know they haven't truly left the current page.

I'm not aware of a symbol or clear way of indicating that a button will result in a modal popup as opposed to a new window or a redirect, not an intuitive one anyways.

Tabs, expands, sliders are just links docked to a visual control that users intuitively know what that control will do.

But for a link to pop up a modal, you just have to click it to see. The pop-out symbol isn't the same as what you're talking about, and both the modal and redirect are associated with the same controls. I know this doesn't solve your question but thats my answer. :\

I've never seen this done before, but you might want to play around with some icons and see if that achieves what you might expect. Imagine a button that says Edit with this popout symbol to the right of it.

Or perhaps an external link symbol.

Also consider that just because there isn't a global standard for this, doesn't mean that you couldn't train your users by being consistent with your symbols. If when using the site, all modal links were consistently and noticeably different, I believe they would quickly learn what to expect.

3
Add Another Item - best pattern for modals
5
Pane vs Modal vs ?: Across all screen sizes
4
Is putting create/edit form in a modal a good practice?
1
Modal Dialog action leading to another Modal dialog - Mobile web
2
Should I prefer "Earliest Prevention" over "Flexible Workflows"?
3
Modal or new page when switching from list to detailed view? (in an issue tracking system)
0
Modal on the mobile: is bottom the best place for the close button?
5
Alternative to Radio buttons
1
Modal dialogs on mobile - Back button
4
Showing a full screen dialog to view a full list of radio button selection