In how many languages should an email be translated?

The scenario I have is that a hotel would send emails to their guests inviting them to fill in a survey. Now the text in the email would be in different languages depending on one of these cases:

For this last case, I was thinking of having English as a mandatory default language but I would also be interested in finding out:

Example: A hotel from France would send the email in English and French, but a hotel from Indonesia could sent the email in Bahasa, French, Japanese, English. Are there too many languages here? Is this the best order in which to show them? Here is where my concerns would be.

Display one language, but provide links for other translations. Given that HTML email is the norm, you need not treat it like a static document. Use the same interface that websites do, providing small links to switch to other languages.

This will be much more visually pleasing than a single email with multiple translations in it.

It will also give a better experience for all users. If you have the user's language preference or infer it based on nationality, you can show that as the default, but links to other translations will allow them to change the language if you guessed wrongly.

Another option would be to go with multiple translations in a single email and linking to internal anchors.

In this case, users who aren't reading in the default (first) language have the experience of clicking on a link to see the content they want (as in @dan1111's suggestion), but you avoid having to create and make available all the different translations. 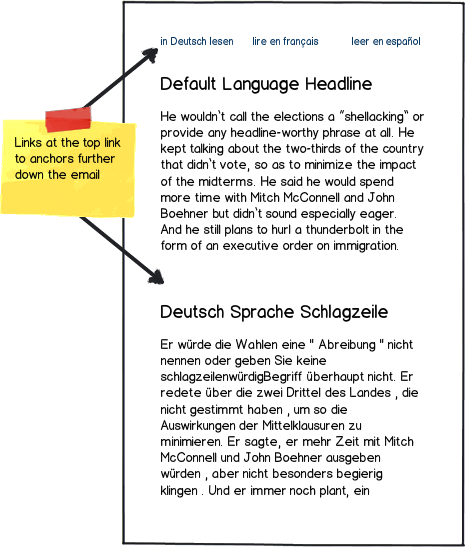 Not the answer you're looking for? Browse other questions tagged email language surveys or ask your own question.

103
How to graphically represent a language
5
What is the best mechanism for language and country selection?
2
Best way to set user language
1
What to use as a textual link to a page showing a list of available languages?
14
UX principles for multilanguage websites?
2
How to show user this content is available in another language
2
What would be an appropriate visualization for the arabic language?
1
Language selection screen - Should it be present Before or Within the Form?
6
Is it acceptable for a keyboard shortcut settings system to be limited to English keyboard?