We are currently working on a cross platform application for iOS and Android. From a development perspective the plan is that the UI, interaction and experience will be replicated across both platforms.

Have there been any studies done on the benefits of this method compared to making use of the design guidelines;

of the different OSs?

My concern is that we will be offering design patterns to the user which might be unfamiliar to them compared to the ones they are used to on their native OS.

I would appreciate any pointers to studies/experiences people have relating to this, thanks.

It depends a bit on the type of app you are developing, but first let's assume a rather standard productivity based app.

My concern is that we will be offering design patterns to the user which might be unfamiliar to them compared to the ones they are used to on their native OS.

Good concern. Doing so will piss your users off and give your competitors market share (as your users leave to use them instead).

What platform did I take this screenshot from? 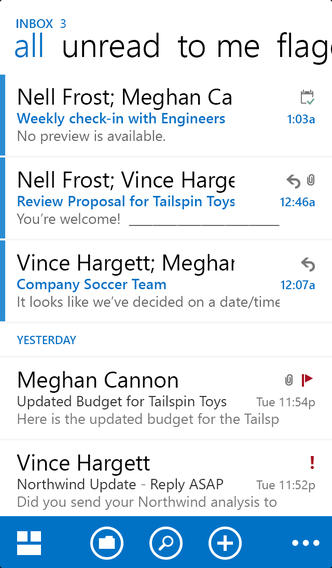 The app is Microsoft's Outlook Web Access (OWA) app. It's a good app; it integrates with OWA very well and does what you'd need such an app to do on your phone.

It looks pretty nice too. It does a very good job of following the Windows Design Guidelines.

People love OS X because it gives them the tools and environment they need to create, manage, and experience the content they care about. A great OS X app integrates seamlessly into this environment, while at the same time providing custom functionality and a unique user experience.

Emphasis added by me. Although this describes a desktop app, it is not untrue elsewhere. User expectation of how an app will work is based on the platform they are using.

To reach back to the mobile space, here is the first paragraph from Apple iOS HIG's Consistency section:

Consistency lets people transfer their knowledge and skills from one part of an app’s UI to another and from one app to another app. A consistent app isn’t a slavish copy of other apps and it isn’t stylistically stagnant; rather, it pays attention to the standards and paradigms people are comfortable with and it provides an internally consistent experience.

Emphasis added by me. Keeping a consistent experience within the target platform improves usability and allows your users to quickly learn your app.

Jakob Nielsen wrote an article on Do Interface Standards Stifle Design Creativity? In it he writes:

Since the dawn of time (1984), we have known that consistency is one of the strongest contributors to usability. The Macintosh was based on a detailed book of Apple Human Interface Guidelines that were followed by almost all applications. One of the main benefits of the Mac (and later Windows) over earlier systems was the resulting consistency that made it possible for users to use software right out of the box.

Again, although the language targets desktop applications the philosophy is true across mobile platforms as well.

This doesn't mean your brand changes from one platform to the next. On the contrary you want your brand on Android to feel familiar to an iOS user, and a user should be able to quickly recognize it as yours. But this does not mean you create your own experience, separate from the both Android and iOS.

But, what about more unique applications. Take Yahoo's Weather app for iOS: 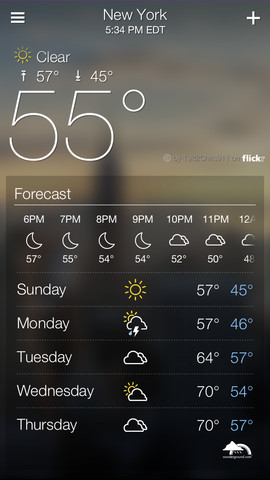 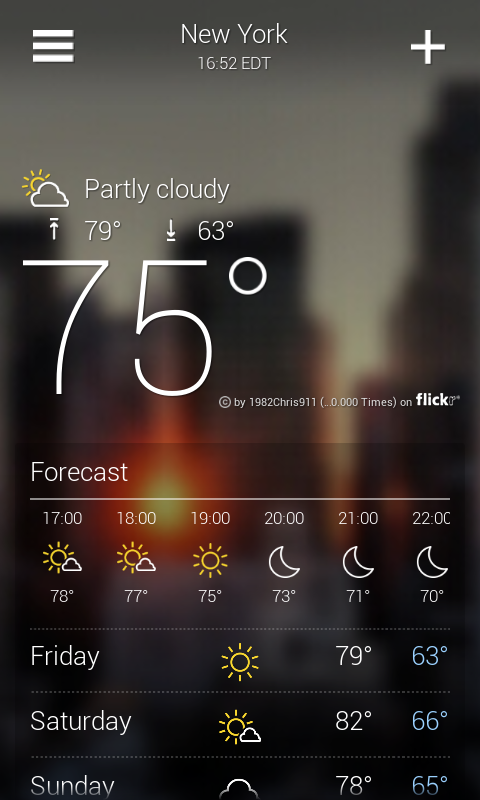 The places where it is important to following iOS and Android user expectations are there. Interactions and navigation might be slightly different, but those actions are expected by the users of the platform. They aren't re-learning interactions just to check the weather.

Generally speaking though, the platform HIG should always be by your side and should not be ignored.

Not the answer you're looking for? Browse other questions tagged android ios or ask your own question.

1
Can I use a control NOT specified by Material Design?

5
Wizard pattern on IOS: Layout guidelines
0
Android design guidelines about left aligning action bar
6
Guidelines for transitions (slide-in from bottom/right)
3
How important is it to stick to the platform guidelines in mobile app design?
0
When to ignore the iOS/Material design UI guidelines?
1
Accessibility guidelines for Mobile Apps