I'm trying to design the best way for an existing customer to confirm their street address and these are the two designs I have come up with.

I like this because it's easy to read and they can breeze on through. If it is their address then they don't see the form. If they select "no" the form appears and they fill it out. I guess I could prefill the inputs and they wouldn't have to fill out the entire box, but that could possibly be confusing.

This seems to be the more common way but why? It seems harder to process the information and the user has to go farther down to hit continue. I guess it might be easier to make a street change since it's prefilled but that's the only benefit I see from it.

But which would actually make their lives easier?I have already flipped through Luke Wroblewski's Web Form Design with no luck on a solid answer.

Method C (Brought up in comments below by Crissov)

Very similar to A (as he said). This method does address the problem that the question and the address are separated (a problem brought up below by dan1111) but the person has to read the address in a format that is slightly less familiar for forms. It also has the same issue with Method A where it might be a problem to "concatenate the address in a format that makes sense to the user" (Matt). I do like how concise it is though. 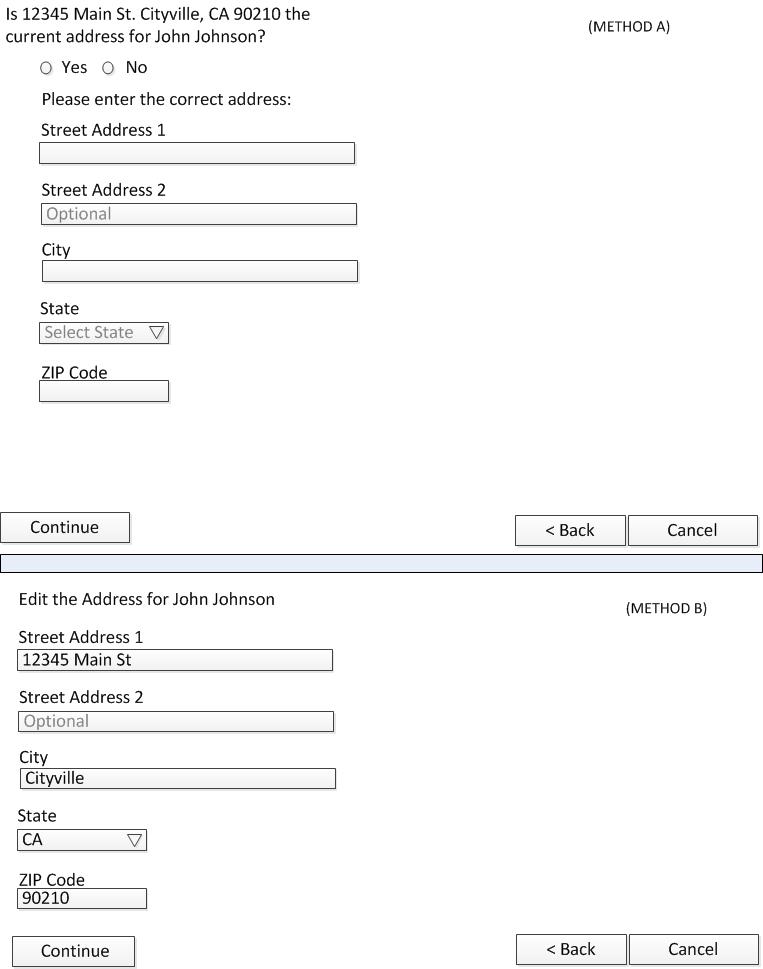 (I'm the UX guy at SmartyStreets where we deal with addresses a lot.)

However, the prompt before the form on Method B is a little confusing. Saying "Edit the address for ..." makes it seem like you are requiring the user to change the address. Rephrase it to be something like "Confirm the address for..." or just a title, "John Johnson's address."

I don't like Method A because you have to concatenate the address in a format that makes sense to the user depending on their country, which can be complicated. Even if you're dealing just with US addresses, combining the address into one line isn't always easy because of the various different formats described in USPS Publication 28 (and that only applies if you're standardizing the addresses). And then you still have to present the user with another choice: whether to update the address or not. Chances are you don't want to interrupt the user's flow and force them to make another choice before continuing.

I think if you just rephrase the prompt on Method B, that'll be sufficient.

The fact that Option B forces the user to review the address is a feature, not a bug.

Getting the address wrong is usually quite costly to both the user and the website owner--something is going to get shipped the wrong place, mail will not get received, or at least a credit card will be denied. Hence it is important that the user checks that the address is correct. Option B does this in several ways:

In contrast, in option A, the address is not highlighted enough. It would be possible to miss it completely, or at least not notice a mistake. It is also necessary to read the sentence to understand what is being asked.

Personally, I also find the format in option B easier to comprehend. Everything is in a predictable location and format, while in option A I have to parse everything crammed into a single line.

This is an A/B test waiting for the 'test'. You have a use case, prototype and now talk to some users, even if its UserTesting.com. I recommend having the user speak aloud as they walk through the three or four views.

Concurrent Think Aloud (CTA) is used to understand participants’ thoughts as they interact with a product by having them think aloud while they work. The goal is to encourage participants to keep a running stream of consciousness as they work.

You only need about 5 users to show you the way. This can be knocked out pretty quickly. Now go and put the 'U' in 'UX'.

You may need to handle multiple addresses at some later point in time; Typically shipping- and invoice address.

Solution A scales nicely to two or more addresses by showing all at once, each with a button "Edit" (instead of the radio buttons for yes and no). "Edit" would load the address into the form.

Solution B does not scale very much - it may work for two addresses, but the two forms would be too noisy already.

So, if it's not really sure it will stay a single address, that's a good reason to choose A.

25
Combining all the address fields into one?

7
How to format 'Same as Street Address'
6
Is it OK to change label alignment inside a form if labels vary greatly?
2
Should you autofill a textbox if there's only one possibility? What about a minimum?
2
Use only "street address" and zip fields for credit card form to meet AVS?
2
Tracking the intent of an Edit (Correction vs Update)
2
Confused whether to make user input account number in the beginning or end
2
Label for street number+name vs. full address
2
How to do address autocomplete right?
6
Address Autocomplete - Shouldn't city come before street?
0
Best method of asking for street / flat number for an international address