Attaching files other than pictures to a mobile form

Client has a desktop-only website that is migrating to be responsive. Contact us form has a button to attach a file (not necessary a picture).

My thought is: attaching a file with a phone is arduous. I don't see any other solution than linking to a cloud where files are stored, and even so, I don't think it would be used that much.

What do mobile users expect to happen with such 'attach' buttons, and what should we do to handle this?

If there's a particular reason the users of the site would want to send images (e.g. screenshots for bug reports or support), then I would re-label the file-upload widget as something like "upload image" for the mobile version of your form while leaving the desktop version unchanged.

On iOS, a standard HTML file-upload widget triggers an action sheet that lets you take or choose a photo, so with the re-labeling you'd be all set. 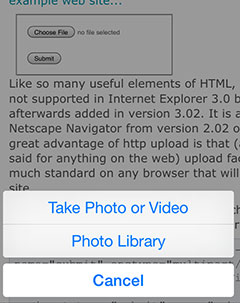 On Android, it seems that hitting a HTML file-upload widget gives you a choice to upload photo, video, or from "Documents," and choosing "Documents" exposes files from your cloud drive and downloads in addition to images and such, but nevertheless, a user wanting to upload from those places through their Android device seems like a pretty limited use case. 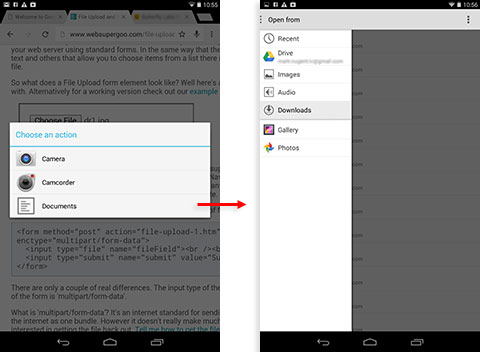 In general, I'd say that uploading an arbitrary file through a mobile device is a pretty esoteric task for most users. Heck, it is for me, and I'm supposed to be a UX guy.

So in sum I'd say that re-labeling the widget to "upload picture" could work, as taking & sharing pics and traversing the camera roll are well-worn tasks for most mobile users. But if there is not a particular reason that it's important for your users to upload images, I would consider omitting the document upload widget from the mobile version of your form entirely.

Not the answer you're looking for? Browse other questions tagged forms mobile files cloud or ask your own question.

6
convention for file attaching on mobile
1
Best approach to serve long list of form input
1
What to do when (phone) storage is full?
0
'Share' or 'Export' to get data out of an application
0
Asking for a phone number + type of number
0
Placing checkboxes inside of text input fields
0
Migrating files structure to the cloud, should all files be copied?
3
Are desktop applications called “apps” yet?
2
UX form with upload Files
3
What's the point of responsive/adaptive design in doing UI?