I noticed recently that many web sites advance video tutorials over text articles. Why is that so?

In my opinion it's much easier to learn from text because:

PS: don't forget that you can use images inside article for visualization.

Interesting question and I'll be very interested to see what others have to say as well.

With regards to video tutorials, an usablity study found that, most new users prefered watching the video tutorials as opposed to scanning the text.To quote the article

Only a few of the users read the help. Most just watched the videos. Keep in mind that all of the users were brand new to the app.

With one user, he didn’t realize there were videos at all, as I had them buried in a side option called “screencasts.” Screencasts seemed something similar to screen sharing, he said, so he didn’t click there until later. When he did, he felt that the videos were just what he was looking for in help material.

Another user watched one of the videos twice, and after watching the video, was somewhat successful in completing a task (or at least a lot more successful than before — there were still challenges).

Despite the popularity of the videos, I found that videos appeal to different users in different contexts. For more tech savvy users just looking for an answer to a specific question, they were less likely to watch a video and more likely to search/scan the text for answers to their specific questions. Even so, these intermediate users were interested and encouraged by the videos available and sometimes watched one. 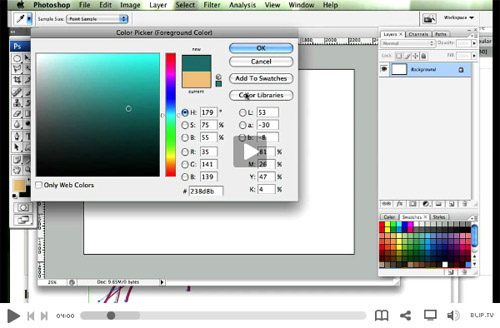 note: I wrote this from memory so dont catch me if I made a few mistakes :)

Taking the above example,there are so many cases where a new user could get confused (e.g. How does he open a document in photoshop or how does he add a new layer or so on). In this case a video would be so much better as he can visualize each step of the process and do it in parallel

For an advanced user, the advanced user might be just interested in what settings have to be set for the blend mode and the text instructions would suffice for him as he knows where to look.

Based on Mayer's multimedia learning theory, optimal understanding is achieved if the models built by our visual channel correspond to those build by our auditory channel, and the two match previous knowledge and understanding (or long-term memory models). The theory is somewhat an extension of Pavio's dual-coding theory.

Expressed in graphical form, the process goes like this:

On benefit of video tutorials is that the narration is presented through the auditory channel, leaving the visual channel to interpret (non-verbal) visuals alone.

With text + photos, only the visual channel is employed (it also have to toggle between verbal processing and image processing) thus you miss an opportunity to utilise the auditory channel. Much more of these is explained in the theory itself.

Would you prefer using words or a photo?

If what you are trying to explain:

It'll be way easier to explain it using a format that is visual and can change over time. That is, a video.

You make great points about the benefit of text over video - I could easily add a few more points. But certain things are much easier to convey using a video.

Advantages and disadvantages of using text or video tutorials can change depending on the subject matter, the audience, and the overall goals of the tutorial.

For the example of subject matter: a text tutorial on "How to hula hoop" would be far more complex than a video tutorial and would likely confuse the reader when it comes to describing the physical movement of the hips, whereas a video tutorial would allow the viewer to quickly imitate those physical movements. Other good video vs. text examples would be situations where important content is difficult to communicate with just words and pictures, such as listening for the sound of a stud when installing an object on a wall.

For the example of audience: this can come down to something as simple as learning style. People learn in many different ways, which you can read about in several publications on education methods; my husband has to watch someone and replicate what they do whereas I prefer to have written directions that I can continually reference. Other times, if a product or service is marketed toward a certain age bracket then the tutorials will be based off the same research. For example: minors aged 10-18 are regularly on youtube rather than reading magazines therefore they are more likely to use video tutorials; some members of the elderly age range have issues reading small print and video tutorials are also easier for them to follow BUT at the same time, not all members of that age group regularly use technology so in many cases using both methods would be useful.

For the example of overall goals: sometimes the purpose of the tutorial can define its format. If it is meant to be entertaining or to grab more attention for marketing then it is more likely to be a video. If it is meant to present a product or service as more engaging to a wider audience then it is also more likely to be presented as a video. If the goal of the tutorial is to teach a skill to people while on the go, or on their own timeline, then a written tutorial would be easier to pick up and put down whenever the user has time.

Not the answer you're looking for? Browse other questions tagged learning tutorial or ask your own question.

1
Using “real looking” data for video tutorials
1
How should I approach a video tutorial for a responsive web app?
0
image first or text content first?
0
Slick text transitions for game tutorial
0
Tutorials to explain UI
2
What is the best combination of shortcuts for sending text message and breaking line?
2
Is there a reason to not allow fast forwarding on a video player?
2
Do popup tutorials do more good than harm?
0
What is the name of the widget that is used for showing tutorials about a frontend app