Shouldn't a user interface be as consistent as possible?

As an example (and the reason why I posted this question) take the accept answer icons on Programmers.SE.

When looking at these icons, I wonder what the checkmark means. I notice the up and downvote icons are either filled in or not. The filled in icon is filled in since I upvoted. I can't couple this behavior to the checkmark, since it doesn't have an outline. What is the current state of the checkmark?

So, I believe it would be a big improvement for the accept answer icon to also be outlined. Of course I posted this on Programmers.SE meta as well.

Obviously I agree with the highest upvoted answer, but I was hoping more on a 'scientific' UX answer, perhaps some terminology, or influential articles discussing this topic.

So to rephrase the question: Shouldn't a user interface be as consistent as possible?

I agree that for this design (Programmers.SE) there should be an outline on the check mark, as there is one on the up and down vote buttons. This would make it look more consistent as well as clear. Also, the check mark should have a less "polished" look to it, maybe more rough marker-like swish.

I think you have to consider two things:

Human-Computer Interaction (HCI) research often refers to transparency as an indication of the clarity and usability of a user interface. Ironically, it's the lack of noticing the user interface which makes it transparent. When it distracts you, as in this question, it is less transparent.

For my thesis, I am looking into Activity Theory which is a psychological theoretical framework which has been applied in recent HCI research. While reading through the book "Acting with Technology: Activity Theory and Interaction Design" by Victor Kaptelinin and Bonnie A. Nardi I came across an interesting section which reminded me of this question I posed a while ago.

In Activity Theory - as the name suggests - activity is placed central in studies which try to understand the way how people act. In this framework, any task, or activity, can be broken down into actions, which are further subdivided into operations. 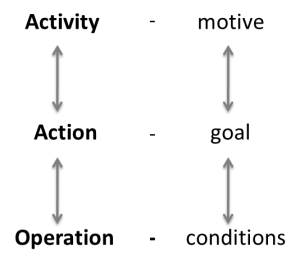 "Activity theory argues that actions and activities are usually consciously planned, while operations are performed subconsciously and without deliberation." This isn't a fixed hierarchy. Activity Theory focuses a lot on the developmental aspect of the human mind. The process of an action turning into an operation is called automatization. An example of this is when learning to "touch type". At first finding the correct key is considered to be an action, but afterwards it turns into an operation.

So far the background information. The point is, transparency can be accomplished through skill automatization. Or less theoretically put, skill comes with experience, so transparency isn't a fixed property of a system, but dependant on the user and his experience with the system.

Finally to answer the question "Shouldn't a user interface be as consistent as possible?"

Although transparency can't be "built" into the system, designers can facilitate skill automatization, resulting in transparency. One such way to support the user in turning actions into operations is by using consistent affordances. Inconsistencies prevent or slow down the user from doing this, or even turn existing operations back into conscious actions.

Interestingly enough, the design is actually the opposite on Stack Overflow: vote up/vote down are plain gray and get colored when a vote is cast while accept answer is hollow unless accepted. While inconsistent, one can readily compare vote arrows, and see at a glance if an answer is accepted. So I'd venture to say that no, a UI should not necessarily be as consistent as possible. The issue is only apparent within the specificity of the "draft" design, wherein the tick can be deficient in some situations.

Also, purely on a graphical point I think it does not feel "drafty" enough and thus stands out as a bit alien.

Side note: that said, the colorblind argument made something click and should seriously be taken into account. Many areas of Stack Exchange rely purely on color to express significant statuses.

True. Buttons should have the same visual language.

I think an outline on the checkmark would look extremely tacky and believe making the arrows follow the checkmark-type convention (i.e. grayed out but colored when selected) would be a far superior option. I don't see it as a major problem to begin with, but if others do, and it's going to be changed, then grayed/colored arrows, I think, is the way to go.

Not the answer you're looking for? Browse other questions tagged icons user-behavior consistency transparency or ask your own question.

17
How broad is the definition of affordance?

6
Hover over icon
1
Consistent UI with different actions
2
User interface consistency: adding print function inside a popup window
2
Best way to incorporate a call-to-action on an icon (on mobile)
0
Consistent nav items between pages?
2
Encouraging individuals to reply to auto-generated emails
3
How consistent should icons be in sizing?