However, they do show an example of a dialog with no close button. They provide a few scenarios (e.g., loss of data, progress, etc.) to justify this pattern. 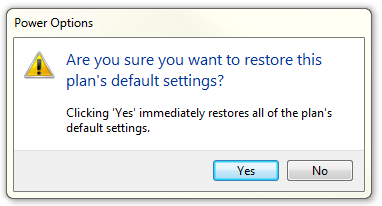 I can only think of one other acceptable use of this pattern:

The only time I can think of when no close button should be there is when "Cancel" action is not acceptable, e.g. the user must make a choice.

This is often connected to popups that isn't caused by user action. For example, the system must be restarted and asks the user when the system should reboot. "Now", "In an hour" etc. Letting the user close that popup won't prohibit the system from rebooting - as one would expect since the close button should act as an "cancel the request" button.

Personally - I hate it when my system forces me to reboot my computer, but that's another discussion :)

A typical dialog requesting a decision from the user give buttons for all of the possible actions to take at that point (ok/cancel, yes/no, save/don't save/cancel). On most dialogs, the close button doesn't give the user additional "control"; it just provides a duplicate way to perform an action. Furthermore, depending on the choices available, it may be ambiguous what the close button actually does.

I can see the point of a close button on complicated dialogs, such as "print" or "settings". In this case, the cognitive load on the user to understand what the buttons do may be high. The close button offers a quick, instantly recognizable way to cancel the operation. But on simple dialogs, I don't think it adds any value.

I want to start of by saying that I loath modals. I do know that there are certainly scenarios where they are good and necessary, but I really don't like them on principal.

Providing the close button as an escape hatch saves me in my panic state from having to process the question, interpret it and then decide which button to click. Close is just going to get me out of here, no questions asked. I don't have to think about it.

To make the point, consider the modal that reads, "Are you sure you want to delete this document?" yes will delete it and no will go back. Now if that question is worded, "Would you like to archive this document instead of deleting it?" Our developer tried to provide us with a much less destructive option, but now yes means don't delete it and no means do delete it.

If the close button is there and I just want to get out of the danger zone, it will accomplish the same thing no matter what.

There may be scenarios where it isn't possible to go back, but ideally you would have the user confirm before they ever got there.

Removing the [X] button should be avoided at all costs since it is the go to button if you don't know what to do and want to cancel your actions.

That said I have had to make a few of them in the past. The reason was that we were building a new UI on a very old piece of software. On 1 or 2 occasions the software needed a response from the user in such a way that it couldn't be ignored. Fixing the reason why this was absolutely necessary was going to cost so much effort for something which only occurs on rare occasions that the client chose to remove the [X] button and force the user to give an answer.

I do not like it at all but sometimes it is a matter of costs vs UX.

I am more of developer than a UX person.

But I feel dialog boxes without a close button have a purpose. For the most part I like a principle from About Face of don't ask for confirmation. Rather give them a chance to undo. Problem there is some actions cannot be undone and can have severe consequences.

This is kind of a data integrity thing but release of data to a third party. Are you sure you want to release 20 document marked classified to the the Washington Post?

Not the answer you're looking for? Browse other questions tagged interaction-design buttons human-interface-guideline dialog close or ask your own question.

2
Is the “X” close Button sufficient or should there be a close Option in a Menu?
3
Alternative to dialog windows
2
Is a close call to action icon desired for a calender dialog?
28
Does confirmation dialog need a close ('X') button?
1
Where to place close button
2
Modal close button style
2
Should a dialog close before a mutating change is accepted?
2
Should a “Close” button on a dialog message modal always be in the same position and style?