How long does the User remember?

I'm wondering for how long the User holds the knowledge about a site? Assuming that you (as User) came to a new website, browse it for a while, accomplish your goals and then leave.

You have learned something, you will remember what steps you followed, where you have clicked before and why. You won't read again the same paragraph each time you come back to the site, you already know what it is about. You could even remember where each link goes and if something potentially useful could be found there. It must be something related to visual memory and the relation of data with graphic styles.

Ok... but how long would you retain these actions in memory? some weeks? a month?

About this topic I'd suggest you read "Designing with the mind in mind" by Jeff Johnson.
It's a must-have book and Johnson dedicates chapter 7 to how memory works.

In particular, he distinguishes between:

How do these 2 memory systems work?

Working memory and long-term memory are not separate memory stores, as some theories have considered them in the past. Researchers believe now that they're functions of a single memory system - one that is more closely linked with perception than previuosly though (Jonides et al., 2008).

What is the capacity of working memory? Johnson writes:

Many college-educated people have read about "the magical number seven, plus or minus two", proposed by te cognitive psychologist George Miller in 1956 as the limit on the number of simultaneous unrelated items in human working memory (Miller, 1956). [...] Later research in the 1960s and 1970s found Miller's estimate to be too high. [...] When the experiments were revised [...] the average capacity of working memory was shown to be more like four plus or minus one - that is, three to five items (Broadbent, 1975; Mastin, 2010).

Anyway, I think that your question is more focused on how recognition and recall work rather than on "memory duration".

Recognition is easy, because - in Johnson's words:

The human brain was "designed", through millions of years of natural selection and evolution, to recognise things quickly.

Recalling memories - that is, retrieving them without perceptual support - is long-term memory reactivating old neural patterns without immediate similar perceptions and is, therefore, hard.

How long should we be shown an image to register it? Johnson writes:

If you're shown an image for 5-10 milliseconds, you won't be aware of seeing it, but low-level parts of your visual system will register it. One effect of such exposure to an image is that your familiarity with it will increase: if you see it again later, it will seem familiar.

What do long-term memory, working memory, recognition and recall have to do wuth your question?

Therefore, my advice is to be as standard as possible.
As Steve Krug's writes in "Don't make me think", the less we make the users think (on their first visit and on next ones), the better.

There would be many many more things to say (your question is really interesting and opens many discussions), but I think it's enough for the moment :)

Bottom line:
Memory is a complex subject and still a research topic.
Using standard interfaces and relying on recognition rather than recall makes a better user experience.
We want the users to focus their (very) limited working memory (remember: three to five items) on their goal(s) rather than understanding the interface.

While I haven't found any specific proof on how long users retain or remember content after going through an user flow, the thing to note is that users are more like to understand or remember an interaction if the interaction or flow is as per the expected mental model. To quote this article

Mental models are broader conceptualizations of how things work and they explain cause and effect. Mental models can be easily transferred from one object to another as long as the objects use the same paradigm.

For example interface menus work mostly the same across different software. Similar are links and website navigation. We have a mental model of how these things work, which makes it easy to use them when we encounter them in a different place.

Designers should consider the schemas and mental models of their audience. Both show how an audience might understand and interpret visual communication.

With regards to the remembering of content, users apparently are more likely to remember it if it was presented first in a sequential order as opposed to content which was presented later.To quote this article

The “serial position effect” describes how list items that are first and last in a list are more likely to be remembered than the items in the middle.

Furthermore, the medium of the list, how fast the list items are presented, and the time between exposure and decision, will greatly affect which is better: being first or being last.

Other aspects to consider are also the Primancy and Recency effects while dealing with cognitive memory loads.

To quote the above mentioned article again

The primacy effect describes the likelihood of remembering items that are first on a list – items presented first on a list are stored in long-term memory more easily than items further down the list (“Storage Mechanisms in Recall”, M. Glanzer, 1972).

When presenting list items to your users in video or audio (or any format where they don’t control the pace), beware that the faster you present the less your items will be stored in long-term memory. The primacy effect only occur when list items are presented slowly or at the user’s own pace.

The following graph compares the concepts of the primacy and recency effect: 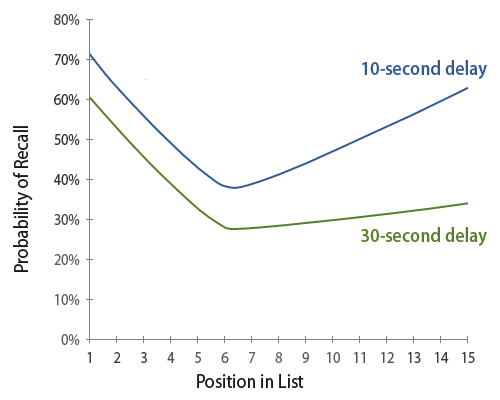 I also recommend reading this article Cognitive Disabilities and the Web: Where Accessibility and Usability Meet? about how to design for minimized cognitive load

Not the answer you're looking for? Browse other questions tagged user-behavior user-centered-design cognitive-load memory pattern-recognition or ask your own question.

3
How long can a user remember what they were working on?
5
"Remember me" login functionality
2
How can an admin edit questions on questionnaire after it has been submitted?
0
UX to choose month/day/time for reservation form
2
How to show the long list of cards in the best possible manner in web UI
6
How long should the user wait before providing reassurance?
2
How to make sure the user does not inadvertently dismiss a modal?