Are ipads used horizontally or vertically?

I found this old question:

iPhone/iPad: Do people use landscape mode?

But considering the now venerable age of the ipad I think conventions may be more established now.

So, my question is, what percentage of users use ipads horizontally/vertically?

Are there any statistics about this? (Is it possible for websites to collect that data?)

My instinct suggests that horizontal may have won out- due to most ipad stands/cases being best designed to support a horizontal orientation. Though considering someone holding ipad, portrait strikes me as perhaps the most ergonomic. hmm.

As per this study done by the mobile usage firm Onswipe, the general usage is predominantly landscape. To quote the article

Mobile usage analysis firm Onswipe, as part of a slideshow celebrating its second year of operation, revealed some further analysis of user data from iPads that in some cases reveal interesting habits and in others reinforce facts already known from other end-user studies. According to the analysis drawn from its 127 million users over two years, iPad users prefer landscape to portrait,

Many games and other apps also prefer to use landscape mode, though web surfing and book reading tend to prefer the vertical orientation. Users have said that due to the keyboard being wider in landscape as well as case stands tending to orient it that way, landscape is also the preferred view for typing.

Interestingly, this informal survey from Brooks says that the portrait orientation is preferred by most users.

I ran a little survey to gather a few data points on iPads and their usage. I tried to make the survey fun enough that users would quickly answer the questions I really wanted to know, without a lot of thought put into them.

Look at this split for the normal orientation that an iPad is used in:

That’s pretty astounding when you think about the fact that PC/Desktop/Laptop manufacturers all but ditched this type of view, thus preferring the widescreen view portal. What’s even more amazing to me is the user preference for the iPad’s orientation:

That said, he makes a very valid point that users will their iPad in the orientation which best suits them and the choice of orientation would be dependent on the application and the use.

Users, by-in-large, use the iPad in whatever way they see fit for the task at hand — not in line with their screen orientation preference.

Surprisingly, only 21 percent show off their app in both orientations.

Despite the primacy of portrait in Apple’s iPad marketing, the majority of top paid apps use landscape in theirs, at least within the App Store. That’s no guarantee of course that this is how people spend most of their time on their iPads, using these and other apps.

Not all categories are represented equally in top paid apps, which happens to be extremely game heavy. By looking at each App Store category individually, a better picture emerges of the diverse ways that iPads are held and used. 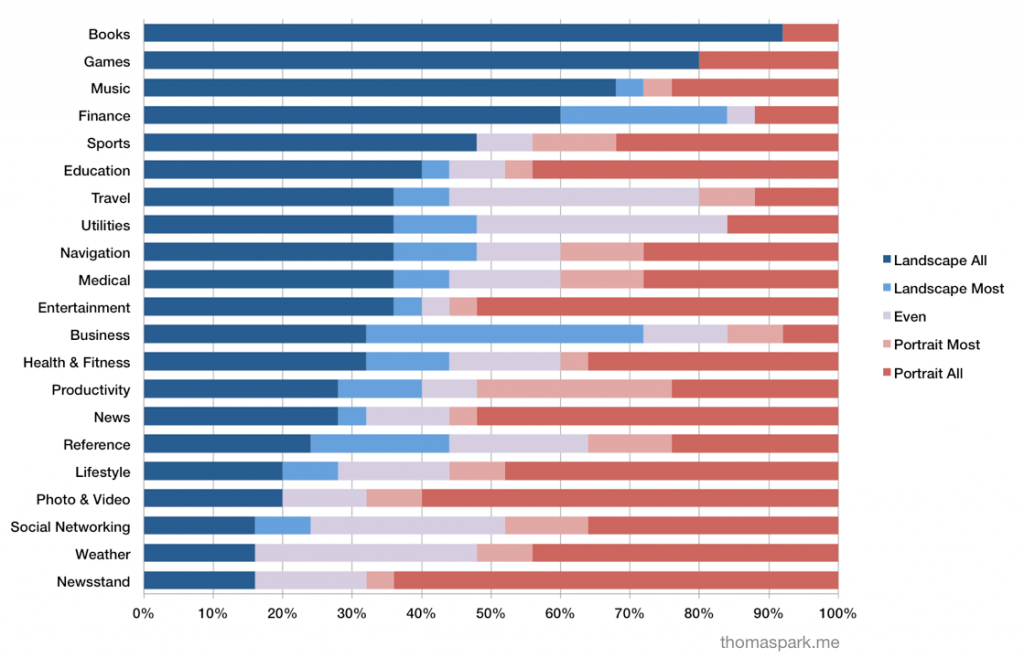 I only ever use landscape no matter what, unless I'm trying to present to someone a photo that's been taken in portrait mode. Most of what I do with the iPad is reading/browsing blogs and newspaper articles and that's mostly in bed, iPad resting on my stomach lying down on my back with a couple pillows under my head.

Not the answer you're looking for? Browse other questions tagged ipad or ask your own question.

13
iPhone/iPad: Do people use landscape mode?

1
Are there any examples of well designed applications on iPad with 3 column layouts?
13
What are the functional advantages of disabling user access to the filesystem on the iPad?
0
How do I present lots of options, few of which are required?
1
What are the drag & drop patterns for iPhone 5 or 6?
0
Should scrollable block elements be used with mobile devices?