For actions like "Edit" and "Delete", which should go with Swipe left and Swipe right? I myself found Swiping left (right handed) is less natural than Swiping right, so "Delete" can be assigned to Swipe Left. Any use case on this gesture that you recommend?

Generally swipe right is a forward or positive action, left is a back or negative action.

But unless you are careful and particularly when you are choosing between quite unrelated options using swipes at all can be very unintuitive.

I'd say that guidelines for actions when swiping left contra right on list elements aren't really established. Looking at the Android UI patterns you usually dismiss/exit elements by swiping them either right or left. Meaning, swiping right or left invokes the same action.

If you want some reference I can suggest the Sony email client which has different actions for swipe direction. Swiping Right will trigger a remove of the list item (then also providing an "Undo" action in the same element which the user can tap or swipe back in the opposite direction to trigger). Whereas swiping Left will provide two different actions on tap, either "Move to folder" or "Mark as read").

These patterns are formed by Sony themselves, they didn't really have any reference. It's a delightful feature however and it does feel natural, but users will most likely not recognize it as something familiar at first.

One disclosure though is to not rely solely on this pattern to trigger these actions (which you may already be fully aware of). Hiding fundamental actions behind interactive patterns such as these are nifty for the ones that discover them, but detrimental for novice users who won't. So keep the actions also on a details page or similar of the items.

I would say, it depends,... ;) Have a look at the platform you are developing for. For ios for example: swipe left shows "delete/mark/more" and swipe to right opens a option to mark the row (email for example as: mark as unread). So there is no clear "guideline" which direction to use. Use the direction which the target platform offers, so you can make sure, user does not have to learn a new gesture or even worse, are confused by a misleading (180°) solution.

Mailbox app does this with visual feedback such as "Red" arrow or 'X' to delete and "Green" arrow or check mark to archive. You can see this as you swipe and know what you are going to to do if you continue. This is better than having to remember the swipe direction/actions. 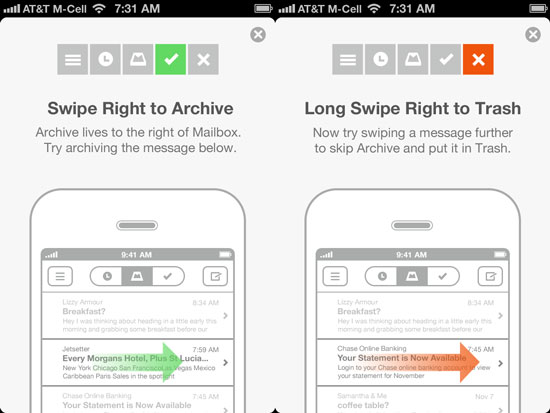 Not the answer you're looking for? Browse other questions tagged use-cases or ask your own question.

1
Can a use case scenario be generic
20
Do you use “scenarios” and “use cases” as one or separate?
1
How to describe functional requirements for a software with high degree of freedom like photoshop/excel?
3
Vertical Videos vs Horizontal Videos