Windows XP had a "Folder Up" button in Windows Explorer. Whenever you want to go to a directory higher in the hierarchy, you just press it.

Windows Vista and Windows 7 have a rather useful address bar that can be used to do the same thing.

But the problem is, anytime I want to go to a upper directory, I have to look at the address bar, look for the last but one directory name and click it. Worse, the length of the button is same as that of the directory name.

In Windows XP, when you just blindly click the "Folder Up" button, you think, "I want to go to a upper folder" and that's it.

If Windows Vista/7 had a "Folder Up" button, it would be duplicated.

My question is: "which is more important? Not thinking while clicking or removing duplication"?

Duplication isn't bad, in fact its very useful. Some people like to search, others navigate. Some use buttons to cut out text, other right-click and experienced users use ctrl + X. Duplication to cater for different user needs and should, in my humble opinion, be used.

But if you should make a user think, depends on the application. If it's an adventure game - most definitely yes. But if it's the explorer I would have to say no. Especially if it's a previously used (and still used) convention.

I highly recommend Steve Krug:s book "Don't Make Me Think", which explains Why! 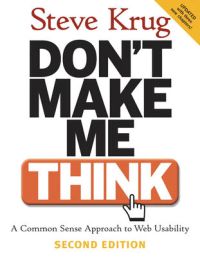 The Problem with Duplication

The main problem with duplication is that it forces users to think. When you provide two methods of doing something, the user has to decide not only what to do but how to do it. Users will wonder if the two methods are truly identical and stop to think if that’s true. One method may be faster under certain conditions than the other, but by the time the user has assessed the conditions, they’ve wasted the time they could have saved.

If duplication means additional controls, it also means more clutter, which can increase visual search times for the one control the user wants.

These issues need to be balanced against the savings duplication provides. The general rule is that duplication is okay when each method has clear advantages over the other for clearly apparent conditions. The advantage may be because some users are known to be familiar with only one method while others are known to be familiar with only the other. The key phrase is “known to be.” I would recommend against duplication for just, what the heck, maybe some users like one method more than another.

The conditions may be individual user difference or may be transitory aspects of the situation too. The situational aspects need to be obvious to the users. For example, I’m generally in favor of keyboard accelerators –for expert users, they’re much faster than a pulldown menu and are obviously advantageous when the user has both hands over the keyboard. On the other hand, I believe we have too many toolbar controls that are redundant with pulldown menu items. Toolbars are only a little faster than pulldown menu items and both perform best when the user is holding the mouse.

The Folder Up Button

In the case of the Folder Up button, I suspect the XP approach is better for the reasons you state, but it’s a tough call. The best tradeoff between thinking-induced duplication and thinking-induced inconvenient controls cannot always be determined through analysis or guidelines. The effects are fairly subtle so it takes a pretty good usability test to determine it empirically. It’s quite a challenge.

However, I think you may be a victim of a shift of philosophy at Microsoft, rather than systematic research. As I see it, after overusing the file hierarchy concept in XP and earlier versions of Windows, MS decided that users should think of their files like they’re a big ol’ heap of web pages. That’s why they took to hiding the tree control by default in Windows Explorer, while pushing other webby navigation aids like Favorites, search, and tags. Removing the Folder Up button reduces users’ tendency to think there’s a structural “Up” to go to. The address bar is still there, but it's intended only for experts -ordinary users are expected to ignore it like many ignore the address bar in their browser.

Maybe MS thought the hierarchy is too confusing to the average user, so that's why they're de-emphasizing it. If so, I think this has been a usability failure. I'm seeing more users getting lost or losing files in Vista than XP. What MS failed to appreciate is that, while many users do have a hard time grasping hierarchies, it's the best we have for complex information.

Or maybe user performance had nothing to do with it. Maybe this philosophy change was more a marketing vision than a usability engineering vision: MS wanted a webby look and feel because the web is cool.

Duplication is not bad in itself. It could be another way of saying "flexibility". For instance, the keyboard shortcut for "folder up" is "alt+up", and you could call it duplication as well. There are cases when duplication is redundant and confusing, and in other cases it's a good and useful thing.

BTW, I think "duplicity" means "hypocrisy" rather than duplication :)

Not the answer you're looking for? Browse other questions tagged buttons conventions windows-os or ask your own question.

16
Are some of Windows 7's UI less intuitive than previous versions?
3
Is it better to have more than one way to navigate to functionality or only one way?

1
Conventional keyboard modifier for expanding/collapsing hierarchical tree view
50
Should I provide feedback from a save button?
1
Why does in-line Label Edit in Windows Explorer have a delay?
3
How can the Copy and Replace message box be improved?
3
Open the folder vs show in explorer?
172
Do people really want to look at multiple windows at once?
2
What is a standard Visual design effect to indicate default button?
4
Redundant to have "add" and "save" button when adding choices from a list?
2
Why is this button of the Windows Explorer labelled "File"?