Do websites still have to support Internet Explorer 8 and below? [closed]

This question does not appear to be about user experience within the scope defined in the help center.

I am about to launch my website. It's an academic site with expected user base consisting mainly of academics. It looks good in Chrome, Safari, Firefox and IE10 and above.

I just sent a link to my colleague who opened it up and it looked like scrambled egg. I discovered his work PC (in a hospital) was running IE7! I am loathed to reconfigure my site (it's likely to take a while and be very tedious).

Do you think it's really necessary to still support these earlier browsers?

If not and the site detects an early version of IE, is a modal dialog urging the user to upgrade, acceptable?

It strikes me that you probably should have researched your userbase before building the site. But hey, you're in this situation now so you need to deal with it as you find it.

I am not surprised that hospitals / academic institutions are using IE7. Performing an entire refresh of the OS, browers, hardware etc. is a very costly exercise, so you'll likely find that many similarly sized places have the same situation. It's not something the individuals in the institution can likely do anything about (firewalls, locked down machines preventing installs etc). Therefore showing them a broken site and a dialog telling them to fix the situation themselves by installing a new browser when that's not something they are even able to do is just a double punch to the face.

Depending on what your site actually does, it's unlikely that it is impossible to make it work in older browsers. If your target audience cannot access the site then that is not their fault, it is your fault for not doing your research and considering them in the first place, therefore you should suck it up and address the problem directly. Make the site work in IE7.

It doesn't need to be exactly the same in older browsers. Users can have an enhanced experience in newer ones, but it should still work in older ones.

Windows Internet Explorer 8 is also no longer supported, so if you use it (or any other browser) to surf the web, you might be exposing your PC to additional threats.

It is safe to address this to IT of the hospital that they need to upgrade to at least IE 9 due to safety reasons.

Don't blame the user for their situation. This is not about who's right, and what's correct. The last thing you want to do, from a UX perspective, is judge your users. A modal dialog telling them to upgrade is self-righteous. By expecting your users to know or care about such things as browsers or operating systems you're judging them, and that's how it will feel to them. you may feel like it's their responsibility, but such personal opinions are best left out of interaction design.

Your only responsibility from a UX perspective is to design an optimal experience within budget constraints and to get it to the user by any means necessary. If all of them use IE8, then today your job sucks and you're making an IE8 site, because that's where the user is. Making the user come to you is poor UX.

Of course, that doesn't mean you always have to support every inch of your site down to IE6. You're on a budget of time, money, energy and patience, and if only 1% of your users use IE8, those resources can be better spent making the site awesome for the 99% of users who have decent browsers.

I thought about sharing an interesting insight: 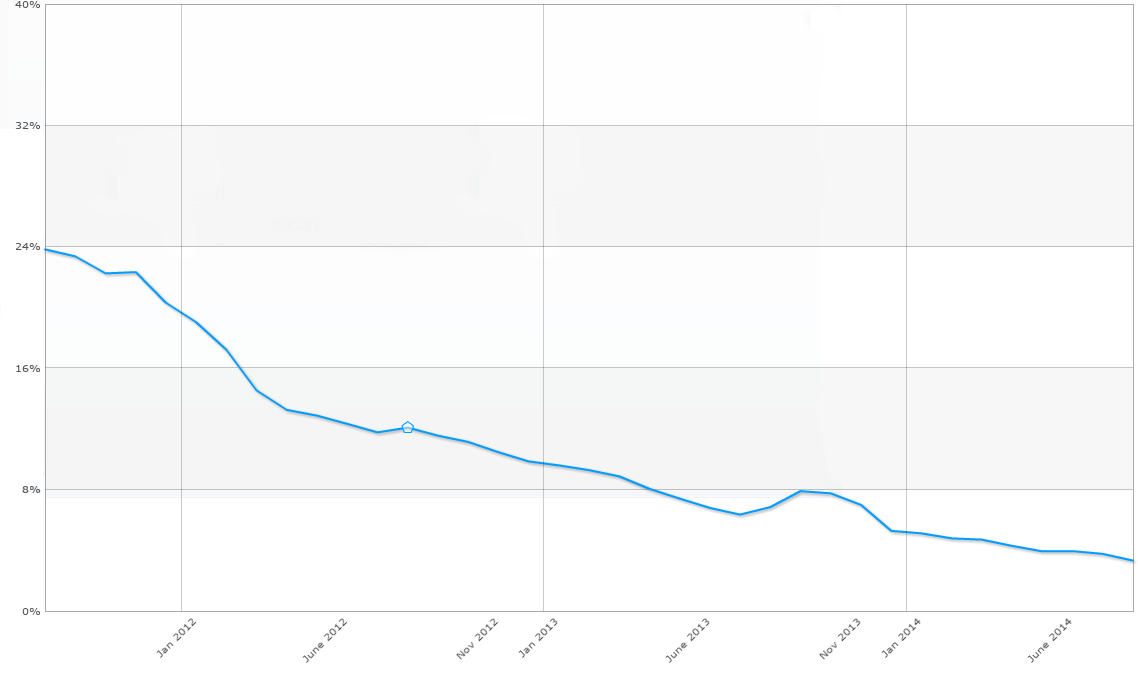 Not dead yet, but by the end of the year and by the current trend, IE8 market share globally should be under 1%. This is great news for most developer thinking about starting to build something now.

However, as it has been explained, you should know your audience, and not only them but the trend that your audience is following. If you're working for Spain, go to http://gs.statcounter.com/ and check market share in Spain. If you go for hospitals, create a Proof of Concept and share it with your target audience and find their browsers through analytics.

I'm biased towards not catering to users who are still on IE7 given how old it is and MSFT's lack of support for it. IE7 was released in 2006. 8 years ago.

I'd encourage you to resist the temptation to hold back on releasing the entire site because some percentage of your potential customers will be unable to access it on some percentage of the devices at their disposal (surely these doctors have phones, personal PCs, newer machines in the hospital), etc.

My proposed plan: 1) Launch the website ASAP 2) Use Google Analytics (or your web analytics platform of choice) to measure just how many IE7 users you are getting 3) Pop a message for IE7 and IE8 users that acknowledges their less than optimal experience 4) Determine a plan for what you will do based on the data you will collect from Google Analytics in advance of collecting it. (if IE7 usage against homepage is >10%, I'd rewrite the whole thing, if >5% I'd do the easy stuff, if <5%, I'd take no further action

In my experience, after you launch, you might find you have 500 more important problems than IE7 that you should be spending your time on. This is in part a design question but more acutely a product and business prioritization question. After all, you are loath to "reconfigure" your entire site.

From their web site:

Your organization may use web apps built for browsers that are now a few versions old. Deploying Chrome unlocks the benefits of the modern web, offering more security for IT plus speed and the ability to run the latest business apps for employees.

Chrome’s Legacy Browser Support allows employees to switch automatically between Chrome and another browser. IT specifies which sites should launch into a second browser and deploys this Chrome policy for the organization.

The LBS feature above should not be confused with the nifty but now-teriminated Google Chrome Frame that allowed a web site to invoke Chrome within an IE window.

For the general Internet audience, you'd be better off telling the users that they could/should upgrade to a newer browser. After all, IE7 or less is run on less than 1% of the world's web (thankfully!), and you shouldn't be supporting such a minimal audience. For your specific audience, where money runs tight and upgrades are not forthcoming anytime soon, you'll have to choose a balance between usability/looks and browser support.

For this specific case, I'd recommend getting a version of jQuery 1.x, which supports IE6 and newer, and lets you write one set of code that will run across all versions of IE that are supported, Chrome, Firefox, Safari, Opera, etc. That would take care of your scripting. After this, you'll want to build a custom style sheet with lots of "important" modifiers in a conditional comment that will take care of the rendering issues in the older IE browsers. The actual amount of work required may be very little for some sites, but without seeing your page's complexity, it'd be hard to tell. You could potentially tweak this up in just a couple of days depending on your site's complexity.

However, if it's going to take longer than that, then I'd just tell the users that they may not have an optimal experience, and they should try out Google Chrome or Firefox. Chrome runs on XP SP 2 or newer, for example, is free, and is usually considered acceptable software by most IT departments, assuming disk space isn't an issue. In fact, Chrome can even install without administrative privileges (it installs in the user's local directory), assuming the user has any permissions at all.

You will need to write a whole bunch of additional styles. You can do so with this syntax:

To explain this, yes of course it is necessary to support IE7. Your goal is to design a user experience for the client, and if the client is using IE7, they must still have an enjoyable experience.

It is not acceptable to coerce your user into upgrading since users at the hospital have no choice.

I think just showing a message asking user to upgrade the browser is enough.

Hope this answers your question.

I think the best thing is to use some kind of progressive enhancement. Anything IE8 and below should get served a simplified single-column site and any more advanced layouts should be in media queries that will only be processed by more modern non cringe-worthy browsers.

I agree with JonW that the people who are stuck in the situation likely can't upgrade so a modal bugging them to do so it pointless. But getting the site to work in IE7 does not mean it has to look the same as it does in the latest Firefox.

Not the answer you're looking for? Browse other questions tagged website-design web browser or ask your own question.

7
Why do most websites have a custom skin where as most desktop applications don't?
23
Do we still need text scaling links on websites?
2
Should a website directed towards programmers and code enthusiasts require IE8 (and earlier) support?
2
corporate websites, stock photos, and intangible products
4
What are some reasons that not all websites have fluid layouts?
9
Do niche web applications still strive for legacy browser support?
1
Gestures and mobile websites
20
How to determine the oldest browser version to support before you have users
2
Fixed primary navigation and secondary navigation pit bar right below