How to display more than 20 data sets?

I have a bunch of data I would like to display in several static graphs. In this particular case, it's the amount of visits different parts of a website has throughout time, for analytics purposes.

For example, this graph shows the amount of visits each part has had since I started collecting data: 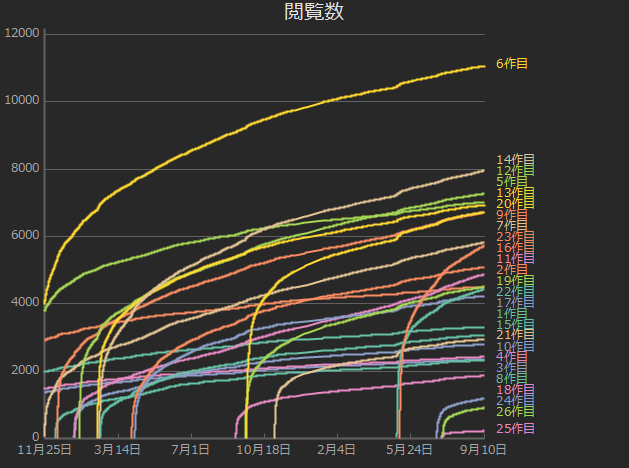 And this graph shows the amount of visits each part has had, during its first 72 hours, adjusted to local time: 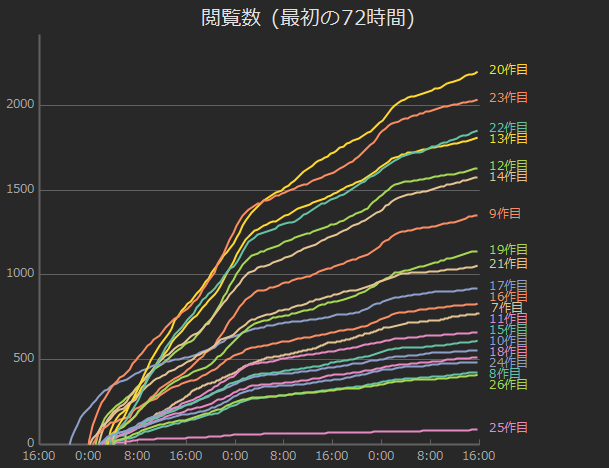 I started by plotting each part of the website as a different line in a line graph, with the label for each line at the right end of the each line.

Initially it went pretty well, but then the labels started covering each other on similar data sets. I made it so the labels would never cover each other, while keeping the order of the last point in the data set. This made an improvement in some graphs, like the bottom one, but made a mess in other graphs where data is more crowded like the top one.

Now, the graph has 26 data sets, the labels are really crowded and this will only get worse as more and more data sets are added.

I know that it's a lot of data to cram into one single graph, but for me it's important both to know detailed information (such as when did one data set overtook another one), as well as general tendencies (such as the increase in pretty much every data set around the 5月24日 mark in the top graph)

Also, I've had to reuse colors for the datasets, and some parts become quite ambiguous, such as the two green lines crossing at the top right part of the top graph. I could reassign the colors based on another criteria, but since the order of the lines varies from graph to graph, and I would like to keep datasets having the same color across graphs, this problem will likely persist.

I would like to know if there is a more intelligent way of showing this data. Ways of improving the line graph would be nice, but I am open to completely different ways of showing the same information.

Finally, I would prefer to keep the graph static. This is not a hard requirement, but more of a preference to keeping it simple. Solutions that involve interactivity are welcome as well.

Does anybody have any ideas how can I show this information in a better way?

I think what you are really after is a decision cube with a graphic part. That way, your users can slice and dice the data and only see the parts they're interested in.

This will not only simplify your graph (because, anyway, no one is going to want to look at all of it) but will also make it cleaner and more rational.

Not the answer you're looking for? Browse other questions tagged charts or ask your own question.

3
Visually representing state conditions
8
A graph for displaying numerical data like age
13
How to display a timeline?
5
Display multi-part progress
2
Improving data usability
3
Best graph for data with both very large and very small values
0
Best way to visualize multiple data points on a graph?
1
Graph Showing Quantities of Multiple Categories for Multiple Years
11
Graph with overlapping labels
2
How can I improve the legend in this line chart with value, norm and prediction?