I remembering discovering this functionality as a child when I operated a DVD player and I've never fully understood it. Recently I've been tasked with writing a short tutorial on the basic operations of an iPod and the question has come up again.

It's similar for iOS except that the condition appears to be nowPlaying.currentTime < 3.

On Windows Media Player, the button always tries to play the previous item and if the first item was playing, it stops playback.

Here is a screenshot of SoundCloud on Android and the default iOS 7 music application: 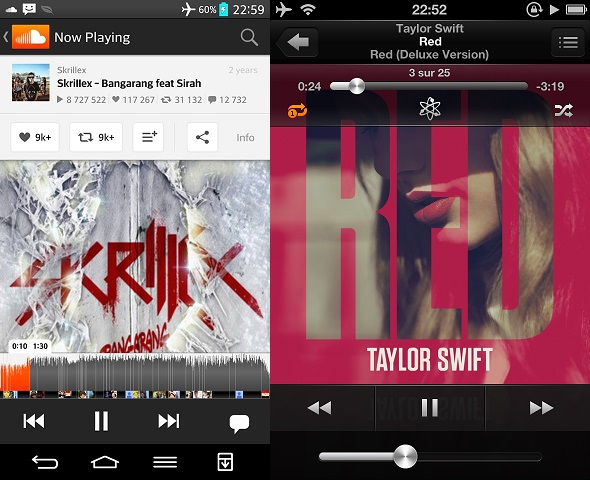 And here are the controls for Windows Media Player:

What is the significance of the vertical bar (or lack of) that the arrows point towards?

Usually, the vertical bar's significance is that it jumps back/forth to a defined point. E.g. to the beginning of a song. Without the bar, the point to jump to isn't defined and it just keeps rewinding/fast forwarding until another user action takes place.

This being said, I observed that this is the fact whenever both types of buttons (with and without the bar) are present. Whenever only one type is present the buttons seem to be used interchangeably.

Why does the behaviour of the button differ with the current time of the media?

I could imagine that most users pressing the ◀◀ button want to restart the song that is currently being played. Otherwise they would have to press back and then forward to achieve this. If you're on position 0, restarting the song wouldn't make sense so the previous song gets started. Personally I have never liked this behaviour, but it seems to be have become to some sort of standard now.

|◀◀ means: Skip to the start or previous file/track. Press it once to go to the beginning of the current item, press it twice to go go the previous item.

So why the vertical bar? Back in the days on tape, both Skip and Rewind would activate the same physical mechanism (moving the tape backwards). ◀◀ would continue indefinitely, and |◀◀ would continue until the next "marker", which would either be the beginning, a part of (relative) silence, or some user-defined marker.

The logic here is:

You want someone who designed and implemented it or just a guess?

Ad. 1 - Either and intention to explain that you're going through the list, not rewinding like on tape recorders (Windows are oldtimers.) See some old player UI, with both sets of arrow buttons.

Ad. 2 - Apple took users and did research (which might ended 70:30, you can never know) and iterations and fights around a table to get there the "err, not this one" correction functionality, because they do business with these small things.

Do we have similar thoughts or you found other potential reasons?

Not the answer you're looking for? Browse other questions tagged buttons controls or ask your own question.

6
Button order Save | Save and next | Cancel | Previous
5
One button or two?
15
Can I use "Prev" instead of "Previous" on a button?
12
Should a music player's previous button go back sequentially or by history?
2
Label for a button to kick work back to previous user
1
One single button or two buttons
3
Button text based on previous button's context
2
Navigation next, previous product for eshop
0
Rotating button text
3
Logic of Next / Previous buttons when changes have been made to Previous