user experience for a dynamically updating list of items

I have a requirement as below:

On my page, I have a button, which when clicked will open a popup, kind of modal window ( as shown in the image below). This popup will have information in it related to alarms generated in application. Any no. of alarms can be generated ranging from 0 - 1000 or more which will be displayed in the popup. 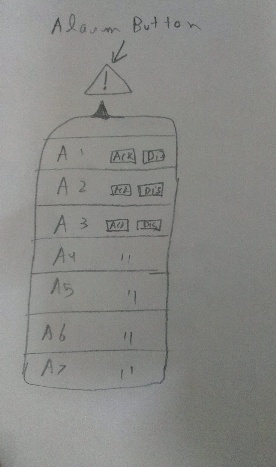 The interaction with each alarm is: 1) 2 buttons on each alarm - Acknowledge and Discard, as in image. User can take action on these 2.

The requirements are : 1) The alarm button will only appear on page, when there are alarms which have been generated in last 30 min.

2) The list, once opened, should also be dynamic, i.e. after opening, if there are more alarms generated, it should append/show in list automatically without user interaction

4) The new alarms will keep coming on top

Summarized workflow - As soon as alarms are generated, the alarm button will appear on page. User clicks on that, the popover opens with the list of alarms. While the user has ability to take action on individual alarm - Discard or Acknowledge, the list will be getting populated dynamically, in case there are more alarms coming in. Hence the list items will keep moving down.

The problem is that if I have a list which keeps on continuously updating dynamically, how does a user take action on an particular alarm - i.e. either acknowledge it or discard it. For e.g. a user thinks of clicking Discard on an alarm in list, it is possible, that as soon as he goes to click on that button - Discard, that alarm might push down the list because of dynamic updates.

Can anyone suggest, what could be a good UX in this case, the image which I have shown, is just a start of the idea. The content/design inside popup can be totally changed.

Never ever update when user is deciding. It is just to frustrate your user while using your app

There is no status when the alarms are generated, how do the user know what alarm was generated at what time

Don't steal control of the selection from user

Here is my visual solution 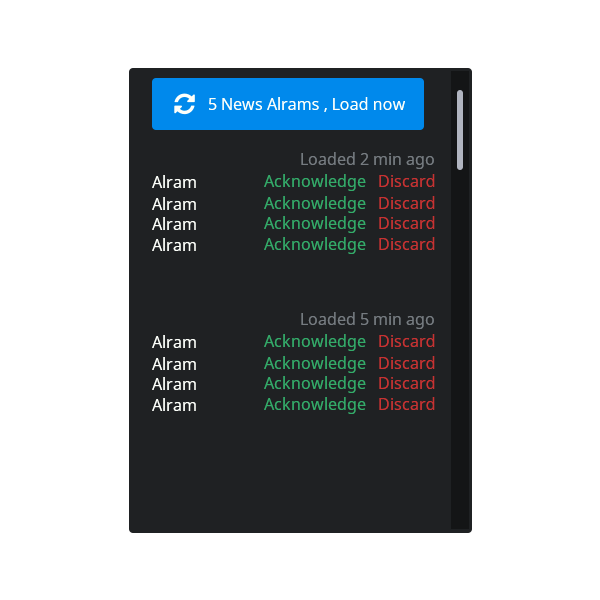 As a user, I would often find it unnerving if the UI behaved in unexpected ways. Instead of having the new alarms pushed on top, you could consider one of the following:

I hope these are any good ;)

It seems like you have a lot going on here. One way to slim down the cognitive overload is to ditch the modal path. If alarms are an important part of the interface, make them persistent. An option to collapse this persistent view is better than forcing everyone to click the button.

With a persistent view, the nature of the dynamic loading (whether top or bottom) will be easier to understand and follow. Dynamic population of modal content can be a little much to process.

Not the answer you're looking for? Browse other questions tagged lists dynamic-ui or ask your own question.

18
Best way to add items to a paginated list
12
Best design for displaying list under a list of items ?
1
Choosing Multiple List Items While Allowing User Generated Content
8
How to allow users to position newly created items in a sortable item list
2
Design for a list of items
0
How to represent selected items in a list?
0
Displaying logos without "guiding" UX
2
Interacting with a dynamically sorted list
2
Best way consistent with Material Design spec to allow user to access multiple supplementary actions for items in a list?
2
UI for multi-select batch editing where eligible item list changes depending on the action