Are buttons perceived as rectangles first?

Yesterday I ran into a discussion with my coworkers because after setting our app high fidelity prototype to a real user testing, we noticed that they barely saw the top nav action button which we consider is one of the most important interactions in our app:

Here are the 3 comparisons:

Button-like (the one we put for testing):

My hypothesis with the button-like action is that the user first sees a rounded rectangle, then notices that there is text inside and later he/she reads what the text actually says. My coworkers said that is not possible, It is obviously a notorious button.

Is there any research that would help me support my hypothesis?

It would be helpful to have suggestions for improving the button-like action in case we need to leave it that way.

NOTE: The icon-like option is the last option we would like to take for we have some view-actions that can be difficult to represent with icons.

UPDATE: I am asking this question because a 100% of the users who tested the app didn't see the button at a first glance when they were asked to "post something".

UPDATE 2: According to @Majo0od suggestions, I came up with a third design that is going to be tested:

This 4th prototype incorporates bolder text + icon. The reason why we choose to have the action button there is because the client is requesting us to have its logo there, always visible.

Interesting question, but I'm not sure if you're asking the right question for your problem.

You said in one of the comments that users didn't notice the button when asked to "Post something". This could be for a few reasons:

See how Twitter does it [I added the orange box for emphasis]: 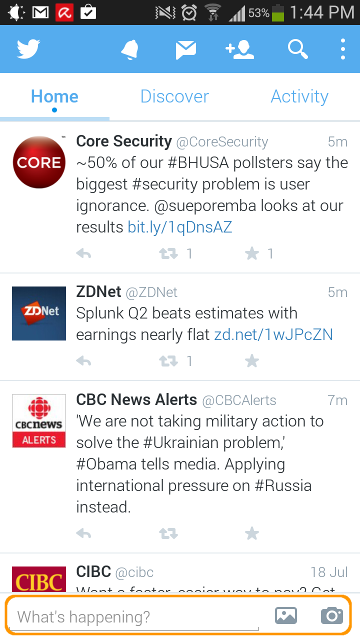 Your hypothesis is not quite accurate.

So I'd assume that for most first-time users a low-level sub-conscious visual process will recognise in its peripheral view a rectangle shape with geometrical irregularities within it (the text). These two happen in 'one go' and should suffice for the brain to conclude that this is a button for some action. Unless the brain seeks to perform an action, the button is ignored, although the brain does remember that there's a button there. All of this happens subconsciously.

You are right that once an action is sought after, the user will move the focal point to the button and will read the text (although, as you may know, not the lot - just as much as needed for interpretation; that's why you'll find it very hard not to see the word in this: p05t). Other agents are part of this process - the brain can deduce the function of something by drawing 'hints' from its position and context.

My guess is that users may not have noticed the button for a few reasons:

So there is actually quite a few things in this interface that works against your aims. 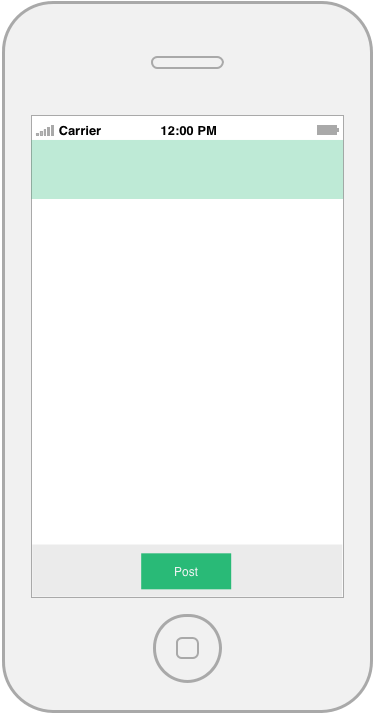 I would also suggest better positioning of your main button closer to the bottom where a person's thumb could reach.

Like in a computer you typically focus on places where your mouse pointer is, in mobile, user's focus is mostly around their digits.

Also, if this action is taken after reading what's on the screen, it's better to position it at the bottom so that it will be natural for the user to scroll down and take action.

Button would be more common way, and looks more easy to tap. Button also always outweighs attention, so it would be good as you consider it as one of the most important interactions.

If you are making IOS7-8 app for example, it is ok to use text instead, becouse thats one of the common ways in their guidelines and lots of new ios7 designed apps. But thats better for a common action, and you are trying to highlight an important action, so button would be the right solution.

Icon would be the worst choice here, becouse of less availability of information perception.

Not the answer you're looking for? Browse other questions tagged buttons actions usability-testing or ask your own question.

7
exclusive select in a table: radio button, rowclick, text only, text and icon, or icon?
2
iOS navigation bar buttons design considerations
0
What would be the best actions to attach to an Android phone's buttons when I don't really need them?
5
How to allow for 'exploration' in your user testing?
5
What is the best approach for showing a button hierarchy when there are multiple buttons?
0
Usability testing with multiple devices in the same session with the same user?
0
Material Design for web: Buttons with labels or icon buttons?
3
Icon consistency in buttons