What is the best suggested way to handle the UX for submitting multiple forms by user, The user need to submit forms. 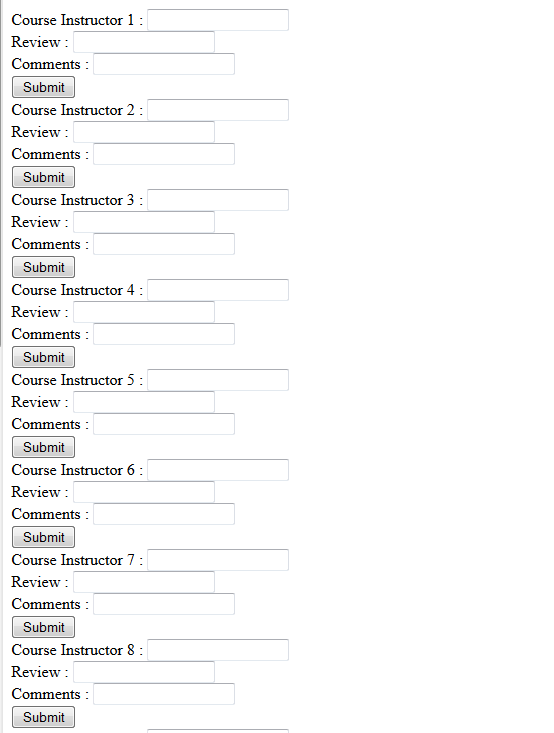 Scenario This is a feedback form submitted by student user for his course instructors. The user registration is already done and have in a separate table. The structure of table is as below

The above added forms are displayed according to gender.

Both the forms are similar , except the change in the course instructors.

Provide less of a cognitive load. Seeing a form like that will make the user anxious, and more than likely lead to an abandon.

Instead, why not create a form similar to this: 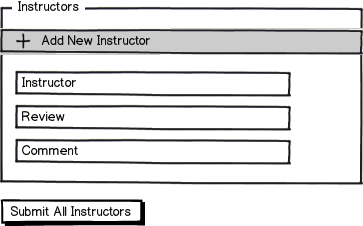 This form provides less information at first glance, but once the user wants to add more instructors, all he/she has to do is press "add new instructor" and another row of fields will append at the very top (make sure to separate by lines, or something along the lines of that). Then allow a button below to submit everything.

If you're committed to having each review be its own form, there is some low-hanging fruit visual cleanup you can do, like:

Also you should commit to doing some graceful handling of the form states. For instance:

Here's a rough example of these concepts in practice:

All that said, the advice in the other answers is sound, and it's arguably preferential to have a single form submit if you're OK with aggregating the data and parsing it later.

Make these fields part of a one form with a single submit button. This reduces the number of interactions for the user and cognitive load. I would also consider top alining the labels and adding padding between questions for clarity. In addition you could consider adding a title for each field-set.

Not the answer you're looking for? Browse other questions tagged forms user-behavior input guidelines or ask your own question.

5
1 form or multiple forms for managing user accounts?
2
Combobox-clutter... how to solve?
5
Best way to show two different kind of login forms
2
How can I display multiple forms and lot of important form information on an Android application?
2
What is the clearer way to save the users measurements?
3
Validation on complex forms
22
When should I use AJAX to submit forms VS regular page submit
1
Best Practices on toggle switches and defaults in forms?
2
Table with multiple submission links for flip switch input
0
Is asking the "I certify that information submitted is true?" question worthwhile?