Which part(s) of the overall user experience is best represented by the NPS?

I have seen some companies define KPIs for their UX efforts based on metrics like the Net Promoter Score (NPS). However, having worked with many qualitative and quantitative metrics to try and model the overall UX for a product or service, it seems that the NPS is very much a sales and marketing driven metric, and that the part of UX it best represents is probably the utility (i.e. usefulness) of the product/service.

Looking at a simplified description of UX as being the usability, utility and engagement of the user when interacting with the product or service, can it be argued that the NPS is possibility more representative of the utility of the product or service since it is the most likely reason that someone would recommend it to another person.

Jeff Sauro has done a number of blog posts related to NPS and UX (http://www.measuringusability.com/blog/nps-ux.php). Based upon regression of SUS data with NPS, 30 to 50% of a user's likelihood to recommend a product is based upon the ease of use of the product.

My view on this is rather different, but mainly as the definitions I use seem to be different than yours.

The UX Hierarchy of need 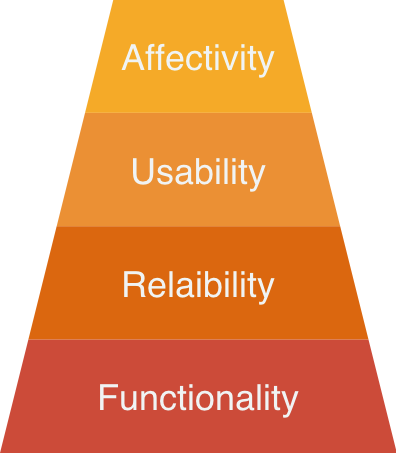 Given the definitions above, NPS, in my view at least, is clearly part of affectivity.

An important thing to mention is that if you ask "How likely is it that you'll recommend this product to a friend or colleague?" and then follow it by "why?", most people's answer will fall into retrospective reasoning rather than an active one. In other words, the decision has been made first, only then reasons are 'made up' - which further supports the idea that it is emotions that play a part here.

I don't think NPS is any indicator of functionality or usability (and definitely not reliability).

Not the answer you're looking for? Browse other questions tagged usability metrics nps user-engagement or ask your own question.

3
What is website industry benchmark for Net Promoter Score?