I have implemented an interactive, one-to-many flow diagram.

Parent and child nodes are connected by a dotted line that is approximately 100 pixels in length/height.

Imagine a parent node that is a 100 x 80 pixel rectangle, with a 100 pixel dotted line that connects it to it's child node, which is the same dimensions as it's parent. The user wants to perform one of two actions: change the parent of the child by adding a new parent, which will effectively make the new parent a child of the old parent and make the new parent the parent of that child, or, add another child to the parent node. What are some ideas on where I could place the icons to perform both of these actions, that would be user friendly and intuitive? I'm also totally open to ditching the current icon that I am using and taking a totally different approach.

Acknowledging that there are really three distinct actions, you could put an "add parent" on every root of the tree(s), an "add child" on every leaf, and an "add between" on any connector. 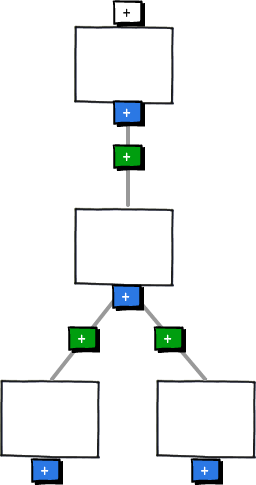 (In this mockup, the white button adds a parent. Blue buttons add a child. Green buttons add a node between existing nodes. If that wasn't clear before reading this comment, it's probably not a good design.)

Not the answer you're looking for? Browse other questions tagged gui-design interaction-design or ask your own question.

2
How best to display top-down decomposition data (hierarchical) with in place-editing and child addition?
3
Master details form in Android
2
How to clear selection which may fully cover the control's area?
5
Visualizing version-controlled hierarchical data
2
Improve design for master-detail interface
0
Best way to organize process of adding child records to a parent record from a UX perspective
1
Flow charts with lots of nodes
1
Using distinct icon metaphors to support both create and add actions
8
What is best UX to avoid 6 buttons and how to make it more user friendly?
1
Ways to Indicate Clickability AND also going to a new process/screen?