I have seen various job templates where users have shown concepts to show skills in a percentage value or pie charts. Below are some examples of that: 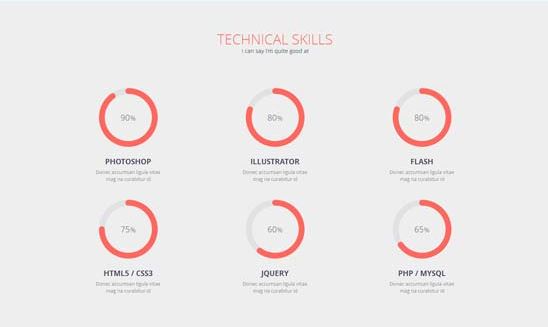 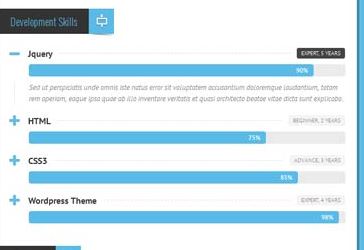 Is this really a smart way to represent someone's skills? if yes, then what should be the way to calculate the % (because % works on relative quantities)?

If that is being calcuated to the number of years/months spent on a particular skill, then wouldn't it be better to keep it simple like this:

If the user has to fill his skills, then wouldn't it be better to allow the user to select out of these options?

I think the best solution has largely to do with what you're trying to achieve by displaying this information. Is it like a resume where someone wants to just get across the message that they know a lot of different things? Or is the goal to more clearly show someone's relative experience between different skills? And how accurate does the comparison need to be?

If it was a real data visualization you'd probably want to be more precise, but in this case it's unclear.

In your first examples, those aren't really pie charts but instead radial bar charts with only one value each. The last example you gave is more like a normal bar chart.

Displaying the data as a regular bar will likely give more precision and make it easier to compare between different skills. But is that what you really want? Does it really matter if someone is 74% CSS vs. 76% HTML? The radial bar charts are less precise as a visualization tool, but perhaps they still get the point across that this person knows more of some things than others. And since they aren't as accurate as straight bars, you aren't caught up as much in comparing exact percentages.

see this chart on the capabilities of different visual encodings: http://complexdiagrams.com/properties

The second question which you pose well is whether or not these percentages are a good way to present someone's skills at all. I like the more subjective measures like "Expert" vs. "Beginner" better, since you don't have to deal with issue of determining a number of years that would get someone to 100%. A person could use HTML5/CSS3 for 5 years, but that doesn't mean that they're an expert. But if you do go with those, you'll probably have to find a way to present the information in a more visually appealing manner like the other examples.

Not the answer you're looking for? Browse other questions tagged user-expectation charts skills or ask your own question.

5
Innovative pie chart? Is there any graph that can be used instead of pie chart?
6
What's the best chart layout for displaying profit/cost/revenue/turnover
1
How to create a consistent user experience for a dynamic chart
3
Chart with an inverse latency axis
5
Best way to show your skills on a resume?
3
How to show negative values in a pie chart?
1
Displaying percentages in tiny stacked bar chart segments
4
How to make a pie chart more intuitive