How should Likert scale options be ordered?

I was asked to give feedback after chatting with Apple support. 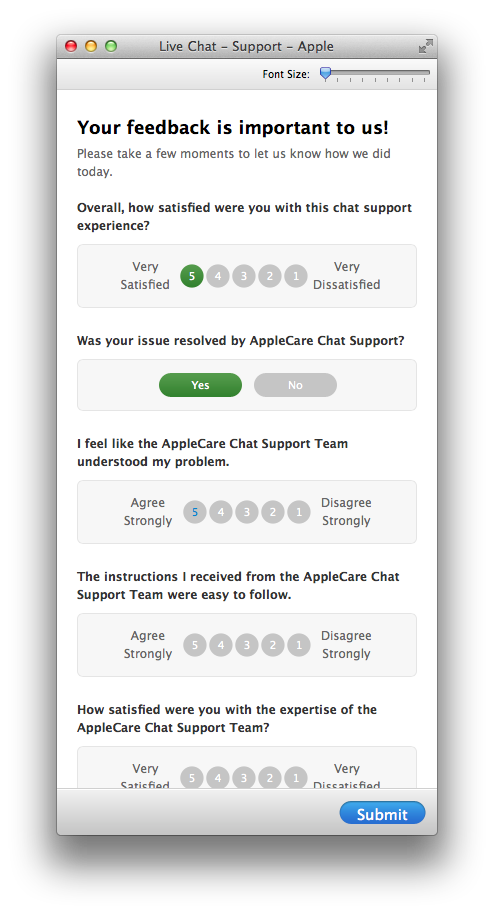 How does the ordering of these options impact responses?

Data and research make me believe that:

In this article you can find the results of a couple of studies. The results of the studies basically demonstrate that ordering values from 5 to 1 (instead of from 1 to 5) leads users to give an higher average rating.

In the first study quoted in the article you can read:

This indicates the existence of a bias towards the response category that is listed first (i.e. on the left side) on the horizontally presented agreement scale, consistent with Holmes (1974).

Does it always happen? No:

In addition, this effect manifested itself in the current study when subjects were presented with a favorable statement. This effect did not appear for any of the negative statements. One possible explanation for this may be that, in this particular study, students clearly held positive attitudes towards their college.

So, in my opinion:

My third thesis is that Apples use this structure to increase the (un)conscious user's perception of the quality of their service. This effect can be explained with many psychological models, for instance the primacy effect, which is

I think this would then go against Jakob's law of Internet User Experience. Which would indeed make this negative UX. To expand on this further, I have stated that consumers are accustomed to evaluations being in ascending order. Which would be supported by this 2004 study of questionnaires which clearly shows all the values being in ascending order.

If we take it a step farther and look at the Kano Model we see that user's believe that numbers increasing show more value, so 1 being the least valuable and 5 being the most. Now the study doesn't say what would happen if the numbers were reversed, just that increasing numbers provide increased value in the mind set of customer supports. So this would only imply negative UX.

Then again, if it does successfully influence consumers to give a more positive answer. Would that not be considered success for the internal users (call center employees).

To further support this theory, I present the Nealson study, Horizontal Attention Leans to the Left, which clearly shows users tend to pay more attention to things on the left and lose interest in things on the right.

Maybe we'll get lucky and Apple will conduct an A/B test and publish the results. (no, I'm not holding my breath.)

From the perspective of psychology, as well as getting accurate statistics, its encouraged to not always make the "positive" answer on one side and the "negative" answer on another. This can lead to people not thinking too much about their answers... Just checking mostly one side or the other. http://m.epm.sagepub.com/content/51/3/531.short Also, another interesting link about using likert scale: http://www.mededuc.com/articles/toptenarticles/1LikertScales.pdf

As a non-designer, I 100% of the time expect to read anything from left to right. And generally, in a scale of how well I enjoyed something my mind functions in dislike to gradual build to like.

I clicked on "dislike" immediately anticipating it to be the location of "like".

If I hadn't taken a second look, which let's be honest, I don't want to spend anymore time on this survey to begin with as a consumer, I would have given the customer support a very bad review unintentionally.

Not the answer you're looking for? Browse other questions tagged surveys apple customer-support or ask your own question.

24
0 to 10 rating system alternative
2
Placing pictures on a scale from happy to not happy
3
Rating system - like/dislike or dislike/like
1
What's the best design to get a number from a small range from user?

17
How to best ask for computer experience in a survey?
3
How should a survey (Likert Scale) be presented in a mobile application?
19
Can a page rating with feedback be more effective than a longer usability survey for identifying problem areas?
1
How can the word "feedback" in the header affect potential new customers?
11
Likert scale radio buttons: default choice?
0
Email Survey - Recommended questions / format for task analysis?
1
Survey tool to ask questions on individual pages - what are they called?
0
Asking for demographic and screening question at the end of the survey - benefits outweigh risks?
0
Yes/No vs. Likert scale