I'm working on a corporate website intended for a global audience (>40 sales territories). The majority of the site content is available in 7 languages (covers 80% of users), with the display language determined by browser setting and with an option for the user to manually override and select another of the 7 languages.

How should I handle the language transition if a user is browsing the site in German, for example, and comes across a press release which is only available in Italian (not one of the 7 supported languages) or English?

I'm currently thinking of using a modal notification to apologise and offer the user the choice of the two available languages. Does anyone have any better ideas?

If you're using a modal, also include a Cancel or Back option, since users who do not speak either language might then be forced to choose one at random and then use the Back function on their client to return.

My suggestion however would be to default to one available language and have a notification-style banner across the top of the page, like this:

...and make the language options into hyperlinks. The notification should be visible but not obstructing, e.g. not needing extra action to dismiss it. Hope that helps.

I think this is a good way to do it. I assume the language transition applies only to the chosen press release, and the rest of the website stays in the language you're in. In that case I think the text should make clear you're picking a language to show this specific press release in (e.g. Leider(...). In welcher Sprache wollen Sie diese Pressemitteilung zeigen?). And there should also be an option to cancel: if you don't speak English or Italian there's no use opening it.

I suggest either language names or symbols that are enabled or coloured if they are available and disabled or greyed if not. That way the user can instantly see what's available and click the appropriate language to switch to it.

If you need to include an apology you could do so in a tool tip on the unavailable language or show a message on screen. 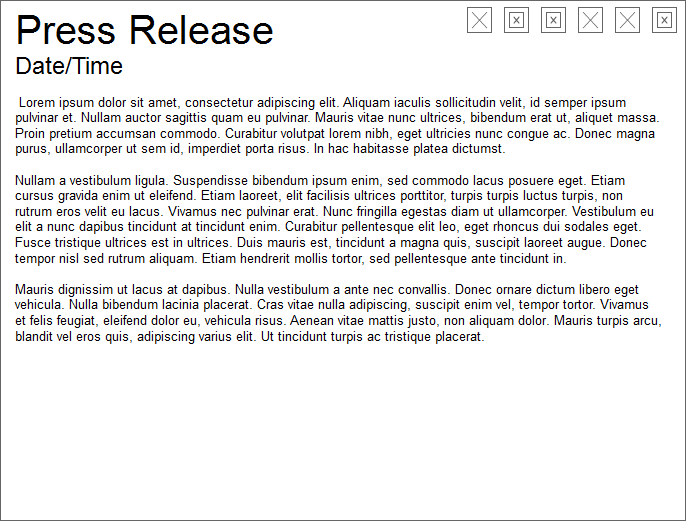 One possibility would be to pre-empt the need for a modal by proposing options in your press release listing.

It sounds like from your description that English is a default. You could choose to list your press releases in the current context (e.g. German) where available, and defaulting to English where it is not available, and providing a message or warning below it to explain that this content is available only in English and (add other languages... I'm assuming there could be more than one more), giving links in each case.

(Pardon my German. Three years of German classes in university, you'd think I could come up with something more clever, but anyhow...)

If you want to further illustrate the global scale, perhaps you would decide to display one of the other languages first, with an English link on the second line (assuming your audience has a greater probability of speaking English than any other alternative language in your context, but maybe you can make other assumptions, like if they are in Norwegian and an article is available in Swedish, to propose that first since the two languages are similar and mostly mutually intelligible).

Not the answer you're looking for? Browse other questions tagged language internationalisation or ask your own question.