I want to try to visualize multiple types of data in one map marker.

We currently have up to three types of data on one coordinate and this is going to increase to 6 within the next three years.

You could think of the coordinate as always having a "base data" and then complimentary/additional data upon the "base data".

The possibility to activate inactivate the types of data is a must have feature, so the visualization on the map must work with all activated or just with one type of data. The "base data can be turned off also".

The map markers action is to open a tooltip with a brief information of each type.

Obviously you can represent the values of multiple variables with text beside the marker. For example, on general aviation sectional maps, airport markers include text for the name, location identifier, control tower frequency, ATIS frequency, Unicom frequency, elevation, and runway length, among other information. For an electronic map, some or all text may be shown statically, on hover, on a click adjacent to the marker, or on a click in separate dedicated area of the display, depending on how often and critical the information is, and how much there is. If you have trained users that regularly use the app, you may be able to exclude the variables’ names to reduce clutter, relying instead on font and order of the values, format of the values, and a legend, to communicate what each variable is (e.g., elevation versus runway length).

However, it seems you’re interested in data visualization with graphical representations of data. That is, your users will be looking for patterns in the data, the relation of certain markers to the geographic context, relative amounts across markers, and/or central tendencies, outliers, and trends over the geographic regions. The users may be searching for categories of markers or markers of certain approximate quantities.

A map marker has multiple graphic dimensions for representing a variable value, but which works best depends on the data type. These include (and are best for):

A marker can be elaborated to use the same dimension multiple times. For example, the overall size of the marker can represent one variable, the thickness of its border can represent another, the size of a hole in the middle can represent a third, the size of a flag hanging off the side a forth, and the length of the “flag pole” a fifth. That’s five different variables represented by the size of something. The same graphic feature of a marker can also be used for different (but usually related) data by manipulating separate dimensions. For example, in addition to varying the length of the flag pole, you can vary its orientation to represent something else.

Presumably the purpose for deactivation is to reduce clutter. That makes sense for graphics and text that are added onto the marker (e.g., flags). For graphics built into the basic marker, you’re not reducing clutter much be deactivating them, so maybe it’s not worth the risk of confusion. It's a good idea to select a few high-use high-priority variables that are built into the base marker and cannot be deactivated.

It’s pretty easy to come up with a marker symbology for representing 6 variables. Somewhat harder may be getting your user to understand the symbology. An easy-to-call-up legend is essential and tooltips are very helpful. Usability testing your symbology will help you arrive at the most intuitive markers feasible. Beyond that, you may need to consider training or tutorials for your users.

For more on graphic coding see my Putting the G into GUI. For issues in color coding, see my Breaking the Color Code (spoiler alert: color coding is sometimes more trouble than it's worth). Also consider getting an introductory textbook on cartography. For more advanced concepts, I can recommend Alan MacEachren’s How Maps Work.

A map marker can show multiple types of information, as Google Maps does it: 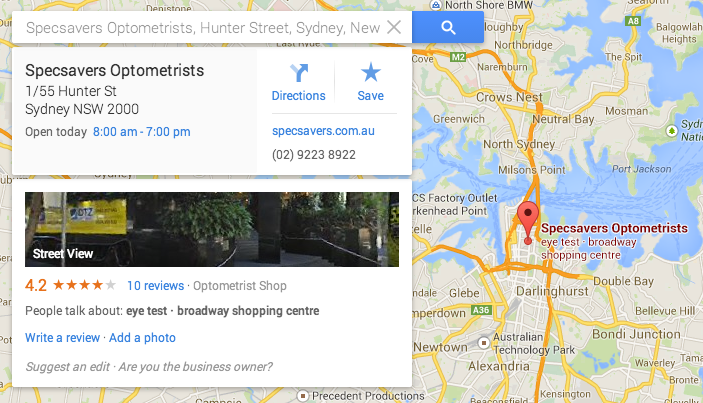 But your requirement seems to be that you want to visually make it clear which map markers actually carry multiple types of information. For this, you could use a colour scheme depicting a particular colour for 1, 2, 3 or more types of info.

Also note that tooltips are usually used for a small amount of helper information. If you want to display multiple types of information for each pin/ marker, I'd say its better to use a card.

Whereas I think Michael's answer is great and pretty exhaustive, I think main options to consider in your case would be: 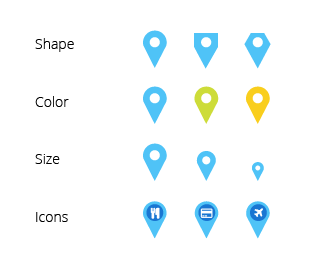 Shape of the markers top (and overall shape — pointed for main markers or round for secondary, and so forth),

Color coding of the markers,

Size (with only two-three sizes, as markers are already quite small, and it's hard to differentiate),

Icons (to code a place function, for example, or show values).

Combinations of thereof can help you to be flexible with your variables, both qualitative and quantitative.

Not the answer you're looking for? Browse other questions tagged info-visualisation maps data-visualisation or ask your own question.

7
Visualization advice for mix of graph/hierarchical data
1
Does finding something through a map also require a manual search?
11
Should map markers be called pins or markers?
15
How to best visually represent a dev team's skillset versus project needs?
18
How to cluster map markers with different statuses
4
How to visualize immediate and total search result counts
1
Should I use Circle or Balloon markers on a map?
1
Design Options for Weighted Directed Graphs
4
Best practices about options and toggles
0
What is the name for a plot that shows data at each X,Y coordinate