What symbol(s) can represent difficulty level in the context of a game?

In short: How to indicate that a numeric display represents the difficulty level?

I'm looking for a symbol that represents the concept of ever-increasing difficulty level, in the context of a casual puzzle game. Alternatively I could use a set of symbols that represent incremental levels of difficulty.

Difficulty level in this application is not something you choose -- it simply starts at 1 and increases without limit until the game is over. Think of a game like Tetris, where as the level increases pieces start falling faster, and the game only ends when the screen fills up.

Note: Two existing questions address how to present a user with a choice of difficulty levels when beginning a game. That's not what I'm talking about. The questions are:

Both for aesthetic purity and to dodge the localization issue I'm trying at all costs to not have words in my game, thus I'm looking for a symbol.

Right now I'm representing difficulty using a dial where the "digits" are the difficulty symbols from skiing (green circle, blue square, black diamond, double black diamond). I use these four symbols (plus a dash for 'zero') to represent a base-5 number. (See Option 3 below).

Even my immediate friends and family, though, have failed to catch on to that cue! And that doesn't bode well for residents of warmer climates, who may have no familiarity at all with the skiing symbols. (The existing question Which colors would best convey 3 difficulty levels? also notes that even these symbols and colors differ between North America and Europe).

So I either need a different set of symbols for my dials, or I need an single symbol next to the dial, which could change to simply being numeric, to signify that "this dial means the difficulty level".

The problem with this: I don't want to use words

Problem with this: I don't know of a symbol that represents difficulty level

Option 3: Symbols in place of digits:

The problem with this: People I've showed this to didn't understand it

The base 5 symbols, from North American skiing:

I think the symbol idea you've presented in Option 2 can work well. Depending on the ease of traversal through levels though, you may not want to change the symbol for every level. For example, if there isn't great difficulty between levels 41-50, maybe they can all be represented by the same symbol. And possibly with that, when the game ends, you can present to them the exact level number they achieved.

An idea to consider is something like Halo does: 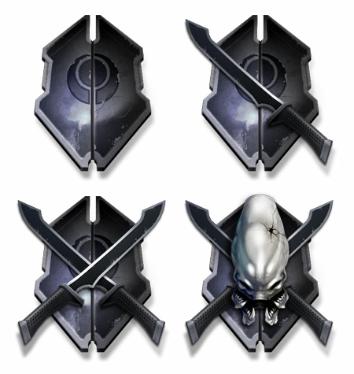 where adding imagery to the icon shows the escalation in difficulty. Although your game may not parallel this specific type of imagery, I'm sure there are options to be used.

Not the answer you're looking for? Browse other questions tagged icons games symbols or ask your own question.

17
How to represent level of difficulty while selecting a game?
2
Which side of the screen should a user HUD be on?
12
What symbol to use to represent feedback
37
What is the best way to represent the difficulty level in a children's game?
4
Represent mandatory/recommended/optional relationships between items
1
Proper symbol in a flow diagram for 'state'?
1
UI to “change user interface language”?
1
User-friendly short URL aliases with words or emojis