Should I personalise forms

I am creating several forms which will be completed by a manager in order to make changes to an employee's contract (For example changing hours/Promotion/Leaver),

The first few fields on each form are for the name & id number of the staff member effected. These are mandatory fields.

As an example on the forms we have the questions:

As I will know the employee's name by this point (for these examples lets assume he is called Bob) would it be better to put:

"How many hours does Bob work?" and "When is Bob's last working day?"

I am using InfoPath to create the forms and they will be filled in in a browser.

I used the example of forms which can have an effect on a persons contract in my examples however we will also be creating other forms which do not have any legal connotations around them, therefore I would be interested to hear whether this makes any difference to the layout.

An alternative to personalizing the questions would be to provide the person's information on the page someplace. Above the form or in a right column, for example. This makes it available without mucking up the field labels. 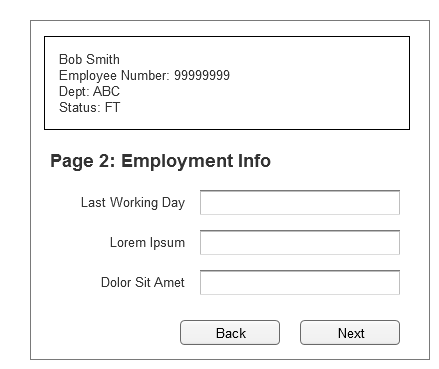 The form is making changes to an employees 'contract' and in my opinion (as a manager) any forms with legal implications should remain as formal as possible, even in this instance.

On one hand, clearly stating the employee's name in each question makes things explicitly clear and provides reassuring confirmation that the manager has entered the correct staff ID.

On the other hand, I suspect this repetition will become frustrating. It also makes the labels longer and harder to scan. Once the context has been set in the first questions, it shouldn't really be necessary to repeat the name throughout the form.

Not the answer you're looking for? Browse other questions tagged personalisation or ask your own question.

15
Should you include names in emails?
2
Should a user know when they are shown personalised results?
2
Should email-address be a fallback for salutation in e-mail, when there is no first name known?