how to illustrate dependence of time of day?

I need to demonstrate that move people spend more time checking their e-mail at certain times of day than others. So I created this chart: 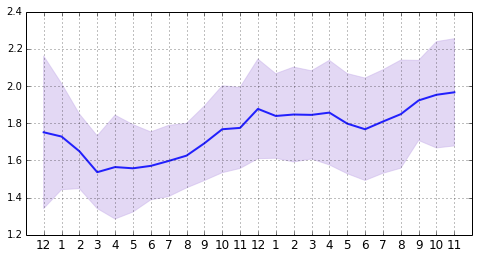 I thought it was this was apparent, but it proved too much work to understand. Instead I am trying out designing this clock, which seems even less intuitive. 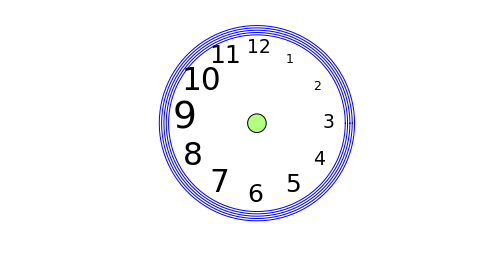 What is a good chart for describing dependence on time of day?

Keep it simple, and as conventional as possible. Rectangular charts are the most common. Label the axes and pay attention to typography. Maybe use military time. Maybe emphasize (darken) the hour lines on the points of the clock (12, 3, 6, 9...).

There's tons of existing charts of this nature out there, I'd spend some time exploring them to glean some ideas.

And remember Tufte's basic rule of information display, which is to not use any ink that doesn't impart information.

The first problem is to show the course of a single day in a form the reader can easily grasp; the second is to relate your data series to this picture. Although "time of day" is a simple one-dimensional parameter, we associate a structure with it (workday, evening, lunchtime etc.) which can cause a certain dissonance when we see it plotted in linear form as in the first example.

(That said, if your audience can't understand that graph, then you have your work cut out for you...)

One thing that might help is simply to distinguish day from night:

This might seem like spurious decoration, but I'd argue that it helps the reader align the graph with their mental model of "a day"-- they can quickly see that the numbers are higher at lunchtime and in the afternoon, and at a minimum in the small hours of the morning, without having to constantly refer to the axis labels.

I left out the area graph (error bars?) because by being there it demands an explanation, and that explanation is much harder for less-numerate people than a simple line graph. It doesn't seem that important anyway, since this graph is more about the trend over time than the specific y-values. I omitted the horizontal gridlines for the same reason.

Of course, another way to represent time graphically is to use actual time:

This sketch example could use a lot of improvement, but you probably get the basic idea: one whole day is presented as a speeded-up "video" of the data series. In theory it doesn't require any graph-literacy at all; if you can understand a time-lapse video and read a thermometer, you should be able to figure out such an animation. On a 5-second loop like this, it's even feasible to read actual values off the graph.

The animation frames could also be displayed statically in "comic strip" form; this would be a simple example of a pattern referred to by Tufte as "small multiples" (Tufte E. Envisioning Information, Graphics Press 1990).

Not the answer you're looking for? Browse other questions tagged data time charts or ask your own question.

7
How to handle daylight savings time when displaying logged data
1
Best Way to Illustrate Creating Charts based on Dynamic Data
1
UX for entering two times per day for time period
1
Display time period/duration in hours/minutes and man-day in web project management tool
0
Quantifying activity by the time of a day of the week
2
Selecting the right units for large timeline charts
0
How to refer to time duration on charts
1
Time ScheduleField, Best practice
1
How to display hourly averaged time data on a line chart?
4
User expectations when measuring durations (relative time periods) around Daylight Savings Time (DST) transitions