How can cable TV Guide UX be improved using the arrow/channel buttons on a remote?

I've searched around and read UX's help section, but I'm still not sure if this question is too subjective for UX. If it is, I can remove it.

This question applies to cable set-top boxes that have an on-screen TV guide functionality.

But when viewing the on-screen TV Guide (example below), the channel buttons actions are reversed.

I've found myself lost in the sea of channels on the on-screen guide after pressing the wrong button a few times expecting to scroll the other way.

Thinking outside the box, what improvements can be made to on-screen TV guides or remotes that would remove this confusing behavior? 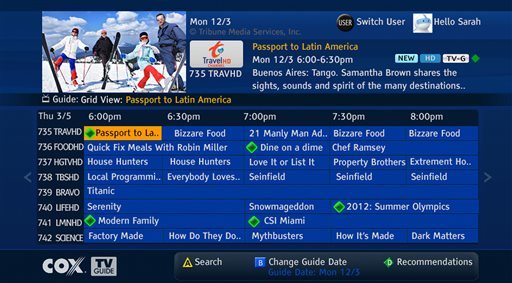 While it's not your problem to solve, one suggestion would be to remove the "channel up/down" buttons from the guide's navigation key set. Force the user to navigate exclusively with the arrow pad, which would eliminate your perceived confusion.

Another option would be to change the label dynamically. When the guide is showing, hide the word "channel", allowing just up and down to remain.

Of course, both of those suggestions are ludicrous, and would only frustrate users. Most people are well served by the buttons as they exist today. And good U/X comes from providing consistent, proven utility, not from random changes based on small pockets of confusion that are not easily addressed.

I would very much like to have a TV remote with a curved touch pad similar of that to the Steam controller (http://www.engadget.com/products/valve/steam-controller). It would give you varying degrees of speed and would even enable a cursor on the screen for more advanced features.

Not the answer you're looking for? Browse other questions tagged gui-design hardware or ask your own question.

7
Multiple Items Settings
3
What is the best way to display the individual results of a survey?
1
Showing remaining time in a web app
2
Saved Search vs Ad Hoc Filters
4
Keyboard shortcuts and navigation in complex widget
1
GUI elements in conflict Field Search, FAB button and Menu bar
7
How to offer multiple filter options when technically constrained to one?
2
Using only arrow keys, navigate from a scrollable gallery to action buttons