Suitable icon to indicate that a customer is deceased? [closed]

Ask Question
Asked 6 years ago
Active 6 years ago
Viewed 3k times
1
Closed. This question is off-topic. It is not currently accepting answers.

I am currently working on a system to manage debt, specifically account history. There are various statuses that an account can sit at and the product owner has requested an icon for each status, so that the user can determine the account status at a glance.

As users of this system will be spending many hours every day with the system I think this is a reasonable request, but I have one sticking point.

I cannot think of a tasteful icon to indicate that the account holder has died. Suggestions offered around the office have included a tombstone, a scythe, dove, and an inverted cross surrounded by a pentagram.

Wikipedia says this typographical symbol is not to be confused with a cross, but I could forgive the association. So that would be an aspect to consider if you decide to employ it.

Ultimately though I don't sliver the symbols meaning has enough currency to use on its own. You may want to include complementary information like a title-text to display "deceased" on hover.

Update I should probably be more emphatic about the implied Christian overtones, even if it typographically a dagger is different from a cross. This may be a convention whose time has come. Looking at Ancestry.com, they don't use symbols, just year of birth and death if deceased.

Could you maybe just have "Ann Smith (1918-1993)" with the dates next to the account holder's name? It implies the customer's demise and provides context, without either hitting you over the head with "This person is dead" or using an icon that may cause cultural issues.

This is indeed a tough one and very culturally diverse. So adding text would be a good way to be clear. I live in Istanbul, a cross-like icon would not be very well understood here. I would suggest a black icon to be used next to a tag: (ribbon) Deceased. 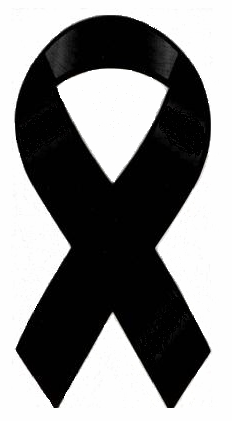 If it's an internal system you're designing for, I assume the user just needs to carry out a task/get a quick overview, so the icon perhaps doesn't need to be rich in emotional value, if that makes sense. Though it might seem boring/insensitive and not immediately intuitive, a simple 'D' for 'deceased' in a circle, with a neutral or no colour (and a hover-over spelling it out for them), could be an option.

I guess that any icon that would be specific to a certain religion should not be used, even though they might be clear.

I searched for 'funeral home logo' on google to get some inspiration and the most you see is a bird, a carriage or some form of wheat. All seem strange to me as an icon, unless you are tweeting somebody is dead.

Personally I would go with a rose, as I cannot think of another meaning for the icon. But only if it's next to the label, not on it's own.

I guess the only clear icon on it's own would be a tombstone, but feels wrong to me.

Update: I like the top left one on this image 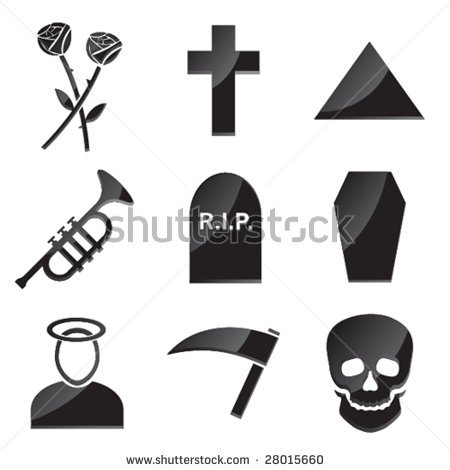 42
What would be a good non-religious icon to represent that a person has died?
31
How do you create or select an icon for a feature?