The main goal is to the user be select dates or a range of dates in a table.

The day doesn't really matter much, while the year and the month does because it's the time between the analysis of the patient.

Background I really would love to use a Pivot Table but the project limitations for minimum requirements won't allow me to do so. (Needs to run on Java 7@Windows XP 32bits) yes, those are the computers they still use on the Hospital. The users have a lot of difficulties to get familiarized with GUIs (they are medics).

The one I used in the first prototype was: 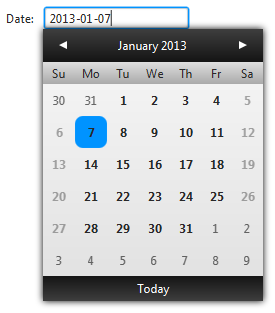 But, it is much more focused on the day instead of allowing to choose a year or a month easily.

But I am not sure about this style, so I tried to think in another one:

Which would be easier for the user to understand?

If you have another thing in mind, please answer, I will appreciate every feedback.

Comparing your two examples, the second one is far, far easier to understand, but I would definitely use the full month names, instead of dates. I think the month drop down being numbers is a bit more confusing.

I would also order it MONTH - YEAR instead of YEAR - MONTH. Generally Smaller -> Bigger is easier to understand. I would also include a header above each drop down for what that column is.

I generally approve of the drop down concept, but you could also (If you feel like going the extra mile.) Consider a more graphical element. Have the years laid out, with months in boxes, and have users pick a start month and an end month on a multi-year calendar. Imagine a multi-year calendar, 12 boxes for each year, have them light up once selected, and use the selected range for your data. Think something like your first example, but for months instead of days.

Not the answer you're looking for? Browse other questions tagged gui-design desktop-application dates datetimepicker or ask your own question.

0
Showing the day of week next to the day selection field in a datepicker component
3
Complex date-time period picker
3
Date Picker Wheels - When to validate?
3
Reverting selected dates in the date-picker?
3
How to show monthly reminder's date
1
What is an intuitive method of sorting partial dates?
3
Date Selection UX for "Year","Month" or "Date" Options on Web
11
How to design a good one-line date picker?
5
Entering a relative date range (in a report writer)
1
Auto Formatting Date Entry that has formatted helper text