I noticed on the Mozilla Firefox website that there is a link/button on the top right of the screen that moves the entire page down to reveal the navigation menu, which is a variation of the mega dropdown menu that is triggered when users click on a specific heading.

Just to add a little bit more context/information, the menu trigger is also found on the main mozilla.org website (not just the firefox microsite). However, footer behaviour is a little bit different, and there are some subtle navigational differences between the mozilla.org and firefox websites as well.

Is there a noticeable difference with the change in the presentation and interaction of the menu that would suggest a particular usability issue that they are trying to address? Do you think this is also a good solution for mobile viewports? 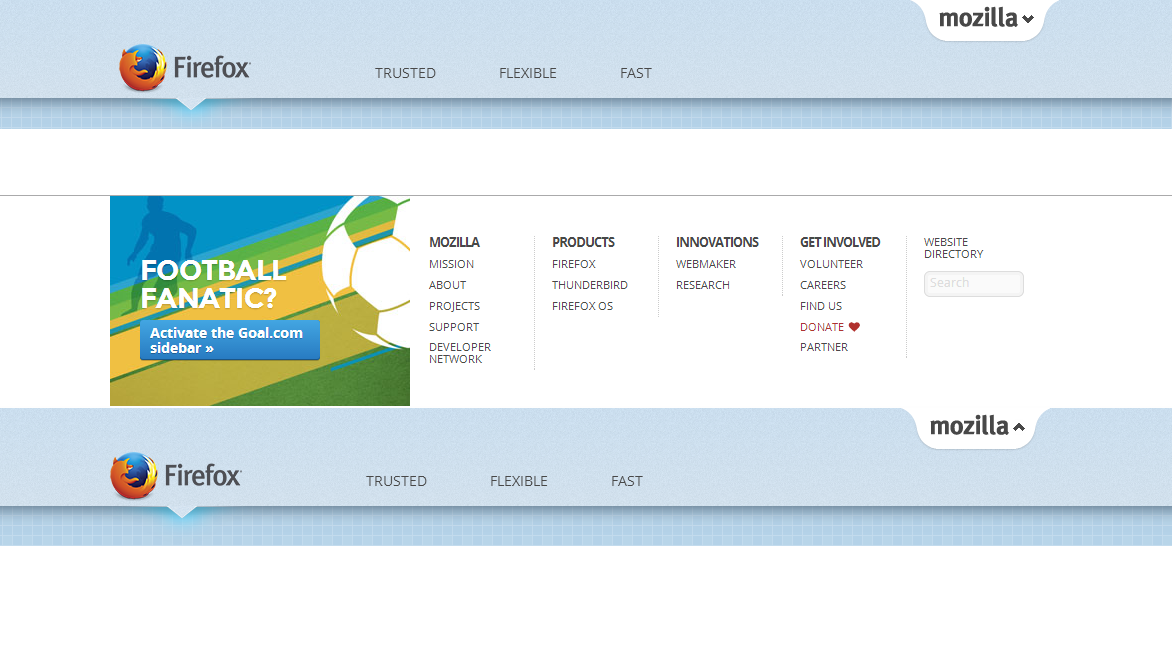 This isn't really a mega-menu per-se (a mega menu is just a bolted menu, but it still behaves like a menu).

This is more of a (get ready...) collapsable-macro-sitemap within a microsite. The firefox section of the Mozilla website can really be seen as a microsite - with nearly everything being firefox related (nav, branding, etc.).

A product bigger than its maker

This comes to address a familiar issue - you have a company that has various products on offer, but the products are somewhat 'bigger' than the company itself - most people are likely to know of Firefox better than of Mozilla, and many people landing on this Firefox page would really like to know about Firefox rather than mozilla. So it pays to keep the microsite heavily product based. But then how do you link to other products or the company itself without showing irrelevant content/links to users?

This pattern solves this neatly by it's collapsable nature - it's a way to say "if you want to know more about the company - here you have it.

Consider, for instance, AutoCad - a fairly famous product, which many people might search for. But the landing page is rather cluttered with AutoDesk navs and links, which you could argue does not serve users' information seeking needs. If I would to look for AutoCad, I'd rather seeing a dedicated product page, and a way to learn more about the company. Also notice that the main (vertical) nav is for the company, which forced them to put a vertical nav for the product. Again, users are likely to be more interested in the product, so it would make some sense for the main nav to be product-oriented (like on the Firefox microsite).

The mobile interaction is little different here: the pattern isn't used to replace existing navigation patterns (hamburger menus et al), it is just a way to promote the parent company from within a common product (landing) page.

5
What is this menu style called?
2
Collapsing header / mega-menu
12
Making mega-menus accessible for keyboard users
6
Task-based navigation with menu-items expanding to Mega Menus
2
Sliding Drop Down Menu Icon - How do I make it more obvious?
7
Mega Menu Width
2
Massive data in mega dropdown - looking for inspiration
3
How to deal with mega-dropdown menus with inconsistent content?
5
Hover vs click on mega menu
3
Careers links in mega menu