Should a save button save information that is not on screen?

My app is used to edit email templates. As you probably know, emails can have a text AND html version. Below is the UI I came up with. My initial thought was 'only save what you can see', so when you click the save button (sauvegarder), only the currently selected view shall be saved (text or html). As the top part of the UI is static when you switch from text to html, I was wondering if the user will think he's saving everything when clicking that save button.

What would you expect when clicking the save button ? 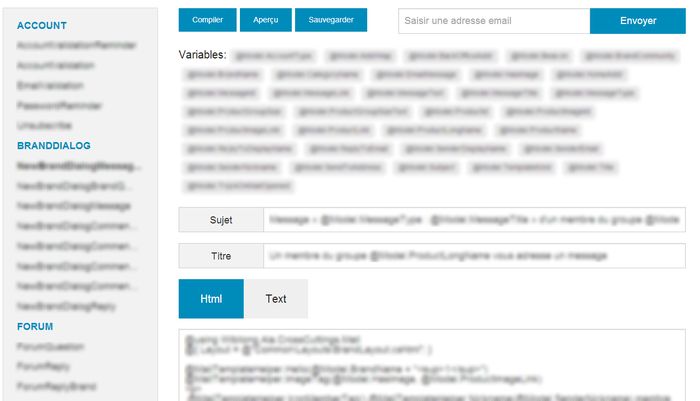 A save button should always save everything. Accidental data loss is about the worst thing that can happen to users.

This is why many applications (e.g., GMail) don't even have save buttons; they just auto-save everything. If technically feasible, auto-saving is an even better solution (as long as there is an effective undo). Note: when auto-saving, it is still essential to communicate to the user that changes have been saved.

I would expect that both versions (text/HTML) will be saved, just like working with the CMS Wordpress. I would also be very frustrated as an user when I found out that I only saved one version of the email. If I would find out, because it's very unusual to save only one version.

Maybe you have to question yourself: Why would an user only save one version (Text or HTML) and not both? I think it's rare that somebody would only save the text version and not the HTML, because the edit in the text would change the HTML outcome (or vice versa), right?

Not the answer you're looking for? Browse other questions tagged gui-design save or ask your own question.

17
Save vs Save & Exit
1
Should I save changes to visible columns automatically, or require a 'save' option?
50
Should I provide feedback from a save button?
1
Should I show a notification on an automatic save?
26
Save buttons that don't save
4
Back button or Cancel/Save when calling server is necessary
1
Save, Publish, Save and Publish
5
Should you allow users to "save" options that haven't changed?
1
Enable save button only when value different, or when input is dirty?
0
Renaming duplicated 'Save' button