To Facebook connect on mobile, we have to choose supporting whether people who installed Facebook app (1) or people who didn't (2).

I'm of those who didn't install the app (weak smartphone) but I was wondering which part of Facebook users are in my case.

If you have anything about it ... Thanks.

The newest research which I found is a statistic from september 2012 by facebook itself on this blog: http://www.forbes.com/sites/benedictevans/2013/01/02/facebooks-470m-mobile-app-users/

It says, the facebook app counts 470m users. The interesting sentence is the following:

Out of 1.07bn total users, Facebook reported 604m ‘mobile users’, implying that 134m were not using these apps and hence were using the mobile web

But september 2012 is a long time ago. So I search for newer statistics. The only one I found is not directly about the using of the facebook-app itself, it's about time spending on apps vs. web. 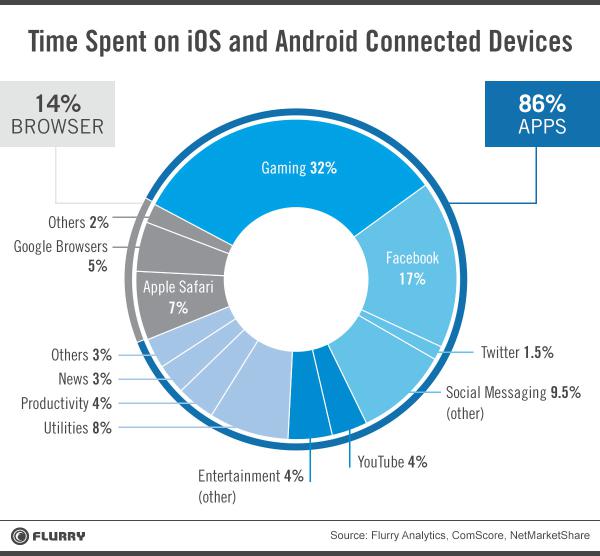 Credit
You can see, 86% of the time the user is using his smartphone, he is using apps. And 17% of these 86%, they're using the facebook app and not the web.

After all I would say, about ~78% of the users are using the app instead of the web (2012), and if I look at the image, the percentage of app-users are increasing.

BTW: I also use the mobile app.

Not the answer you're looking for? Browse other questions tagged mobile-application facebook-connect or ask your own question.

4
What do users expect when showing list of friends who use the app vs friends that don't?
5
secure banking apps
1
Would users understand splitting an Android app's functionality by permission?
1
Any studies comparing Inertia Motion vs Value Selection in form data?
0
What are best practices for in-app Facebook share?
2
Table with multiple submission links for flip switch input
3
How to encourage ethical usage and discourage unethical usage?
6
Are there guidelines on the timing and frequency of notifications?
0
User Experience Between App Installation and First Time App Opening
1
My iPhone app requires sellers to verify their email address and phone number, when should I do that?