Why do read links turn purple?

Is there any specific reason why a link is blue and when it is clicked/read, it turns to purple?

Do these colors have any meaning?

I can't find any information on why visited links are purple. It does however seems logical to me to choose a color close to the link color, preferably one colorblind people can distinct too.

I can't say if this is the actual reason it was chosen, but a reason why purple is a good choice is that, other than red, it has the lowest relative luminocity of any hue.

So, a purple will tend to appear darker than an equivalent blue. Assuming the background is white and the text is black, and assuming we expect people to be more interested in pages they haven't already read, visited links will stand out less from a block of black text than unvisited links, but will still be noticeable.

Red isn't an ideal choice because in many cultures, it's associated with warnings and alarm.

Purple's low relative luminosity is consistent across the two most common forms of colour blindness (which are shown in this chart from wikipedia which shows them, somewhat ironically, with red and green lines... standard vision is barely visible behind red (deuteranopic, to green's protanopic) on the right in yellow): 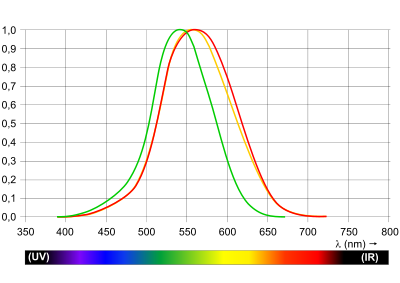 Did they decide by studying a chart of relative luminosity? Probably not. But the fact purples appear dark could be the reason, for example a discussion could easily have gone like this:

"We need a colour for visited links. It should look darker so they stand out less."

"No, people might not be able to tell if a link was dark or light blue if it was the only link on a page."

"How about purple? Purple is, you know, dark, it's not a bright colour like yellow or green."

There can of course be more than one reason in favour of a decision, whether conscious or unconscious, yet more against bad alternatives (so they get rejected before we even see them) and hence I reckon the other answers here are also partially true. Indeed, quite likely so, since there's an answer here that talks about TimBL while I'm going to talk about Mosaic, which was independent from him.

One stated reason for Mosaic choosing the colour, is that 4-bit colour was still common, and so designs would need to consider how well they would look on such displays. Most such displays used two sets of colours, one of which was of the sequence:

(Note the fun way the mixing of colours and adding of numbers has the same results).

Of this sequence, the colours were darkest to lightest in that order (still true of the equivalents in sRGB, NTSC and other richer colour-spaces, though the exact proportions are generally different). Indeed the scheme was designed so you could depend on different relative shades when used with a monochrome display (black and white, black and green or black and orange).

Hence the darkest colour other than black (already used for normal text) that therefore offered the next-greatest contrast against a white or (as used by said Mosaic browser) grey background, was blue. Hence what would later (when attributes for describing colours where added to HTML) be called #0000FF was the standard link colour. (#000080 would also have been available, but not as distinguished from the black of unlinked text).

Red is well-known as a means of emphasis, it would be an appropriate choice for an active link (and was used as such, though I'm pretty sure not until later on, with Netscape Navigator 2.0 if memory serves, since before <frame> and javascript an active link didn't mean much as the page was going to unload anyway), but inadvisable for a visited link, which if anything should be de-emphasised compared to unvisited. After red, the next brightest colour, and so the next most appropriate for text other than blue and black was magenta, but the darker #800080 (purple) was sufficiently different to both blue and black to be distinguished from them, and again the darker choice and hence that which stood out best against a light background.

I will give one of the best answers now.

Ofcourse the colors have meaning.There this flower named as Lupinus Argenteus which is usually blue in color. But after a Bee visits the flower and obtains nectar from the flower, the color changes to purple in a few days. This makes the Bee understand that the flower has been visited and doesn't waste its time in the visited flowers. The same concept is used in this search results where the visited links appear purple and the unvisited links are still blue. This is a way of getting the UI from nature. This is done with a lot of research put into the work. 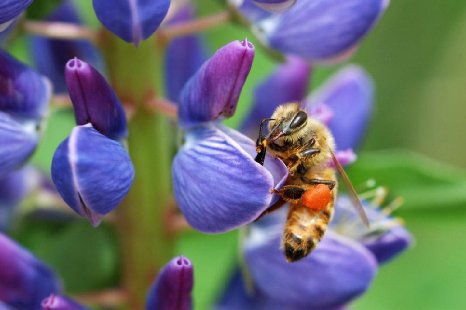 It all depends on the CSS for the page. It may not always be purple. The CSS :visited selector is what controls it: http://www.w3schools.com/cssref/sel_visited.asp

4
Why does ux.stackexchange.com use a darker colour to indicate visited links?
6
What should we do with external links on a Reddit-like social news site?
11
When to display a link as a previously visited link?
1
Placing and styling the "Read all answers" for a interview question answer web page
20
Is there research on whether users know how to open a link in a new tab?
5
Links in a page pointing to same page? (as in Stack Exchange questions' title)
2
Does styling HTML buttons as links cause any user interface problems?
3
Visited links: expectations and accessibility
1
How do I convince my boss that too many link colors are bad for accessibility?
4
Should visited and unvisited links be of different color?