Is it safe to assume everyone uses / has mouse wheels?

Is it safe to assume all users are aware of using the mouse wheel to scroll and that all users have a mouse wheel on their mouse?

I'm hoping to implement a scrollbar which stays hidden even when you hover over the panel but shows when the user is scrolling using the mouse mouse wheel.

I've seen this on OSX when using the mouse pad, but is this bad UX?

Hiding the scroll bar is a bad practice, for a few reasons:

#2 is the particularly big deal, IMO. It looks 'sleek' to remove UI elements, but the reality is that you disorient the user.

That said, you can (probably) remove the interactiveness of the scroll bar indicator... "if and only if" you have a design and persona case that particularly warrants it. A display-only scroll bar cursor is an indicator as per #2.

I would still recommend against it. Your browser has all that built-in UI capability for the scroll bar. Just re-style it to suit your chic hotness.

If you go thin, see if you can make the scroll cursor image smaller than the 'grabbable area.' Meaning, the area that the user can click on could potentially be larger than the size of the graphic for the cursor. This would provide the 'low profile' look, while affording the easy usability that a person desires.

Also, regarding OSX, the scroll-bar is hidden until you start scrolling. Then the scroll cursor appears, and the user can interact with it. That is their trade-off, and honestly, I've sat at the side of numerous users who were confused about how to scroll & how to move around a page.

One would say "even on an iPad??" ...there are many different skill levels that come to technology. A scroll bar on-boards naive users until they acclimate to other contemporary GUI conventions.

I would like to see pages with infinite scrolling place an infinity-symbol under any artificial scroll bar/indicator (while the user is scrolling). It would give transparency to what's happening.

Overall, I believe hiding the scrollbar is bad practice. Even if everyone has a scroll-wheel on their mice, people are still prefer the scrollbar to go up and down a page. Also people might become intimidated by the lack of a scrollbar since the bar is an indication that there's more to see on the page than you currently see.

Specific to your question title, unless you have absolute control over the platform, you should not make any assumptions about the hardware that your users may be employing. There are a myriad of input devices that already may be in play: touchpads/trackpads, trackballs, mice, touch screens, etc., let alone who knows what may become available in 3 months, 6 months or a year.

You should code to standard behavior of the interface API, which should abstract away the hardware specifics. Whether I scroll the wheel, roll a ball, or swipe the screen, a scrollbar (or any other widget) should exhibit standard behavior. If you change the behavior of a standard widget, you risk confusing and alienating your users. It may be petty, but I get very frustrated when developers change normal widget behavior. For example, one app I am stuck using has their own incredibly narrow scrollbars. It is very hard to click the right spot to grab the thumb, annoys me to no end.

No. Not everyone has a mouse wheel. Some users don't even use a mouse. They use the trackpad and the keyboard.

Now, your real question whether it is good UX to hide the scroll bar and show it only during scrolling: in my opinion.. No. Strictly speaking, users without a mouse and without a scroll bar can still scroll, e.g. using the space bar in the web browser. But in my personal experience, the amount of users that know such features is small. Also see this question: Why does the space bar do page down in browsers.

Here is some vague evidence that users don't know this.

This has already been said in the comments, but it really ought to be an answer: Do not hide the scroll bar, because most laptops do not have a scroll wheel. At best they have a rather substandard scroll area to one side of the mouse pad.

I speak as someone who took an online exam which assumed the use of a mouse scroll wheel would be possible.

I think all of the other answers have made it clear about not being able to assume everyone has a scroll wheel.

To expand upon the other aspects of the question...yes, OSX has made hidden scroll bars the default behavior.

But some things to keep in mind:

In other words, if you are writing a native OSX application that will honor the system preferences for this feature (so that it's applicable to a macbook, but maybe not a desktop), I say go for it. In fact, I'd encourage it as it means your sticking with the OSX default behaviors.

Not even every mouse, Apple's Mighty Mouse has no scrollbar, but you can use the whole area for scrolling.

Hiding useless scrollbars when the content is smaller is okay and expected by most, but hiding active scrollbars was the worst decission ever and is only confusing the average user. Might make a little sense on tiny mobile phones, but even there it feels weird.

For many people the scrollbars are an indicator how much of the content has already been read and how long it will take to the read the rest. That's something you can do with a quick look without interrupting your reading. If you are forced to dummy-scroll around the page and keep the focus on your text position while waiting for the scrollbar animation to appear and checking it in time before it disappears again, that's just stress and people will soon get annoyed with your product.

Google recently experimented with just removing the scroll arrows in Chrome 32, and found that users were so upset with the change that they had to put them back in Chrome 34.
Since the arrows are the one feature of the scrollbar that is completely duplicated by the wheel, it is clear that not all users have or want to use their scroll wheel.

The most I've seen successfully done is to hide the scroll wheel until the mouse moves over the element. And, even then, I'm sure some indication of scrolling position would be useful. The only other time to remove scrollbars is if you don't want the user to scroll, such as with CSS sprites.

The accepted answer by New Alexandria is a great one; it goes into detail, so I don't have to. I'll just say that, for those reasons, in general it's very bad practice to hide the scroll bars. It's a very familiar feature, and familiar features come with user expectations—mess with those expectations and you generate confusion.

Even though Apple does it; there's a reason why they let you change this behavior in System Preferences » General. However slight any confusion may be, confusion is always bad. And for computer illiterates, the confusion may be greater than we think.

All this, of course, assumes that you're not creating some sort of poetic software and wish to arouse these particular emotions. I can't think of an example.

But the bottom line is that it depends. It depends on your application, your users, and the circumstances surrounding them. Even for me, it's annoying to have to scroll to make the bars visible before I can drag them—but I use a Magic Trackpad, so I like them hidden (hence it depends on the user).

A great example is Pentadactyl for Firefox, an add-on that gives you Vim key bindings and a Vim-like status bar, and lets you do everything with your keyboard. You scroll with j and k, and the status bar shows the scroll position. Now it suddenly makes sense to hide the scroll bars.

Here's a screenshot. On the right side of the status bar, it says "Top." (The image is from a blog post I wrote about it—original): 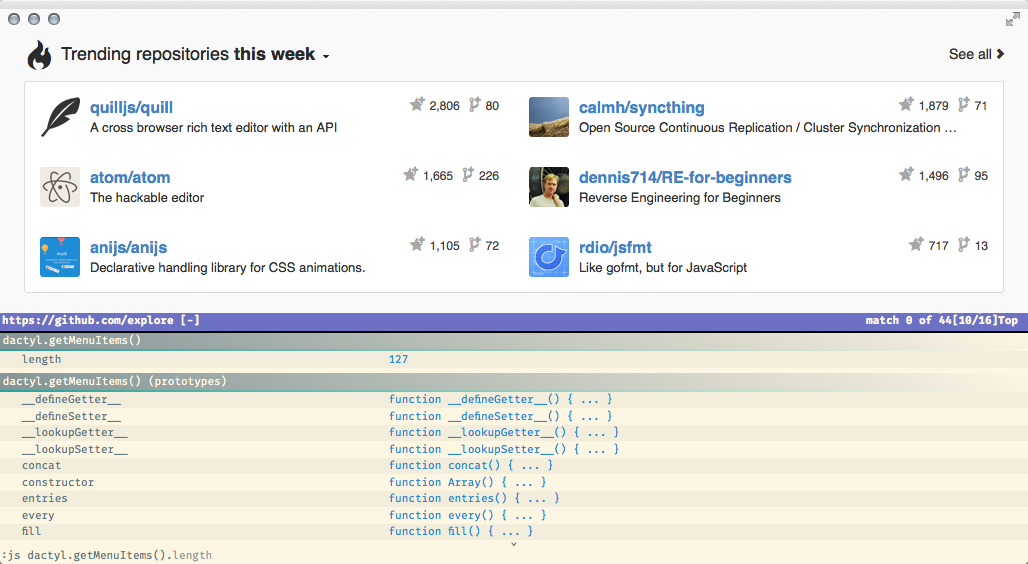 Once you scroll, it shows your position as a percentage value. Here's a second screenshot, taken right now (original): 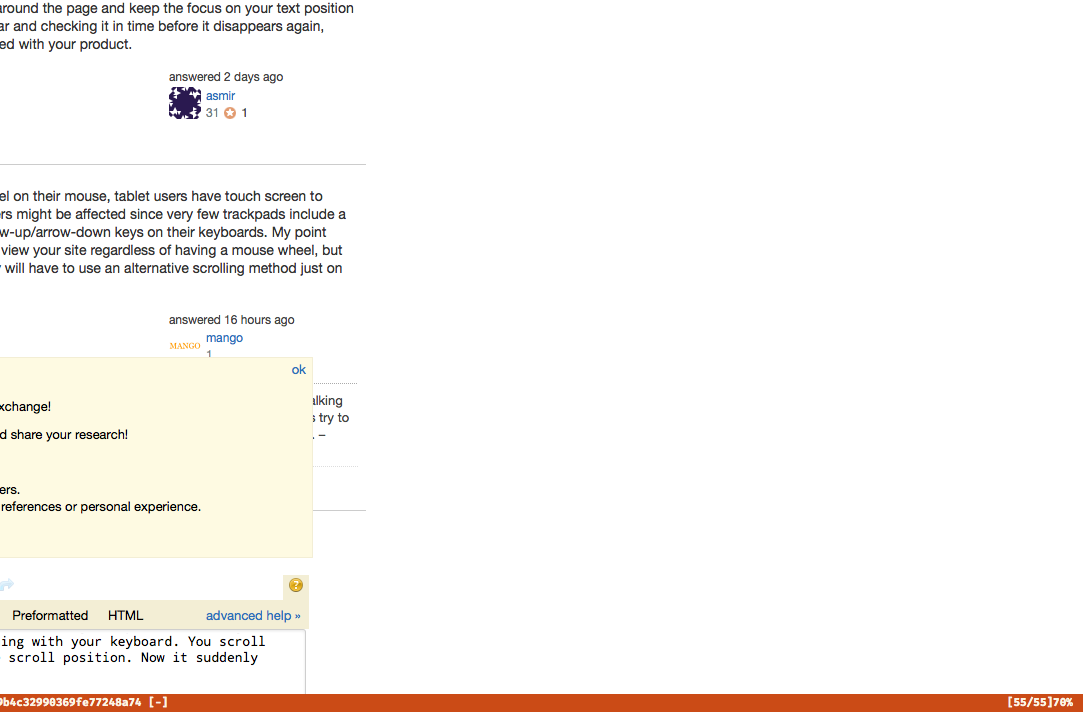 But, note that scroll bars are still useful and visible in areas such as textareas, like the one I'm typing in. Here, they are still expected. It all depends on the situation and circumstances.

Potentially interesting:
Every year, my father is impressively getting more efficient with his Mac. Still, he has a tendency to drag the bars rather than "touch scroll" with his Magic Mouse, and always uses back and forward buttons. However, his mouse at work has a physical scroll wheel, and that one he uses. Perhaps because its purpose is more obvious—more familiar, no confusion.

Is hardware and software design moving too fast and leaving some of the less literate users behind—or is it a natural and necessary pace which they must choose to keep up with? Well, I suppose it depends on your target audience.

Disclaimer: I'm not affiliated with Pentadactyl. It, and Vim, are simply great examples.

I would imagine most desktop users have a wheel on their mouse, tablet users have touch screen to scrolling to aid themselves, and while laptop users might be affected since very few trackpads include a scrolling wheel they can always just use the arrow-up/arrow-down keys on their keyboards. My point being being that everyone should still be able to view your site regardless of having a mouse wheel, but for some it's going to be inconvenient since they will have to use an alternative scrolling method just on your site.

Not the answer you're looking for? Browse other questions tagged usability user-expectation mouse scrollbars or ask your own question.

67
Why does the space bar do page down in browsers

0
How to pan a panel in C# WinForms?
6
How to inform user that he can use mouse wheel to interact with an object?
27
Are inner scrollbars a bad ux?
4
Mouse scroll wheel should target focus or hover?
0
Usability issue with horizontal scroll bars and page scrolling
10
Mouse wheel interaction with nested scrollbars
0
Are there still many people dragging scroll bar to scroll down/up in the webpage?
2
Using mouse scroll wheel to advance carousel; disable scroll up/down page
2
Turning knobs with mouse wheel
2
How to deal with modals and scrollbars