Placing full name, including prefix and suffix, on one line in a form?

I am working on a form page that has a name field, including Prefix, First Name, Middle Name (NOT Initial), Last Name and Suffix. The client would like to have all these fields on one line. So here's the challenge, our width is limited to 960px and we are locked into a 16px font.

The project is pretty far along, but I'd really like to figure this out as it would make the client very happy. However I'd like to do it without making it too complicated.

I considered placing this as a form that they complete and then it collapses just displaying the name in it's entirety. Then having an edit button to the right of the field in case they need to go back and change it. This would look cool, but it is extra steps.

Is this something that is even worth pursuing? Has anyone seen it done better/similar? Thoughts?

Added a screenshot. It follows the pattern of the remainder of the site, but this is the only place where I'm having an issue. The biggest problem is the font size and the restricted width. Trying to fit this all one line, I tried a couple of things. The first was to have this as an open module and upon completion, collapsing it to a display field of one line going across, leaving an edit button in case it should need to be changed. The second was the google contact method where the user enters all the information one one line then clicks a button to distribute the entered information to the correct fields. Neither of which the client liked. Hence my posting the question here.

One step you could take to give yourself more horizontal space is to place the labels above the corresponding fields, rather than next to them. Luke Wroblewski did a study http://www.lukew.com/ff/entry.asp?504 which showed that having the labels above the fields actually makes the form easier for users to complete.

I think there is nothing wrong with having the fields change to static text, as long as 1. It is really necessary. And 2. You user test it to make sure it is clear to users what has happened and how to edit the fields.

Do you have the capability to dynamically sync the data entered in the input fields? If so, you can provide feedback to the user like this: 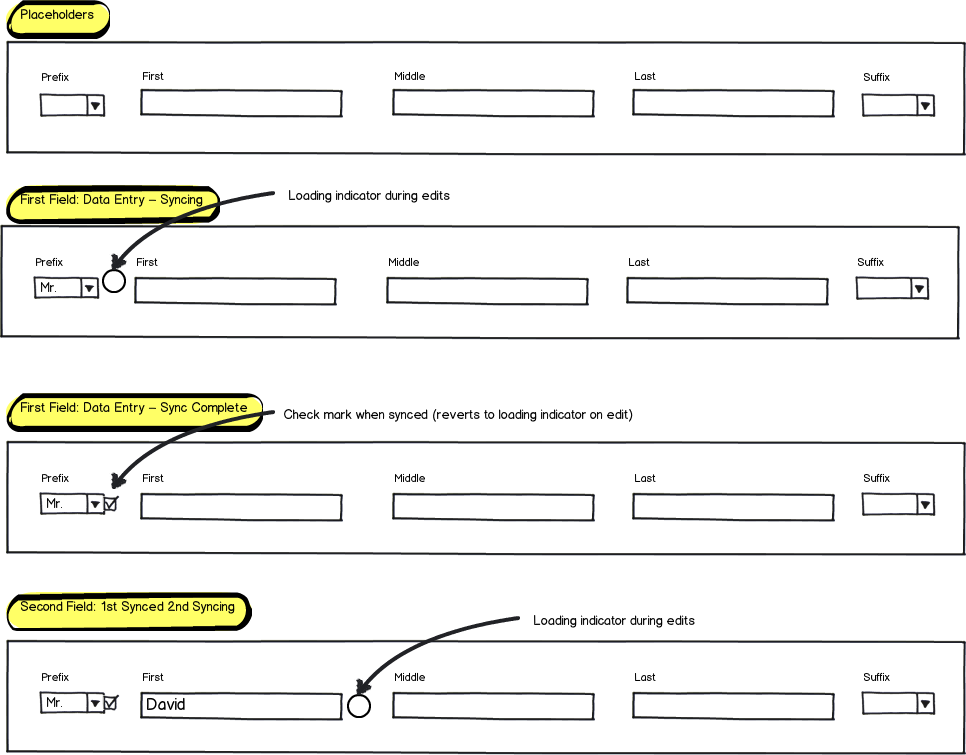 Not the answer you're looking for? Browse other questions tagged usability forms controls or ask your own question.

2
Why Is editing account information commonly done in sections?
3
Name and Company - One field or Two?
4
HTML4: Insert IBAN by separate fields?
2
styling of required fields
0
Streamlined name fields vs. user preference for additional options
1
Can multiple fields be grouped on one line of a form?
1
Label width in horizontal forms
2
Adding Users to a list