I'm trying to figure out what would be the fastest and most convenient way to select a departure date and return date for a flight searching form.

The standard for the travel industry is to have one calendar for departure and one for return but since around 70% of our users search trips that have a duration of 2 weeks it seems to be a slow approach for selecting "date 1 + duration".

So wouldn't it be faster and better to use one datepicker + duration instead of the standard double datepickers that most travel sites use? Also it would be much faster on devices without mice input (phone/tablet/future unknown device). 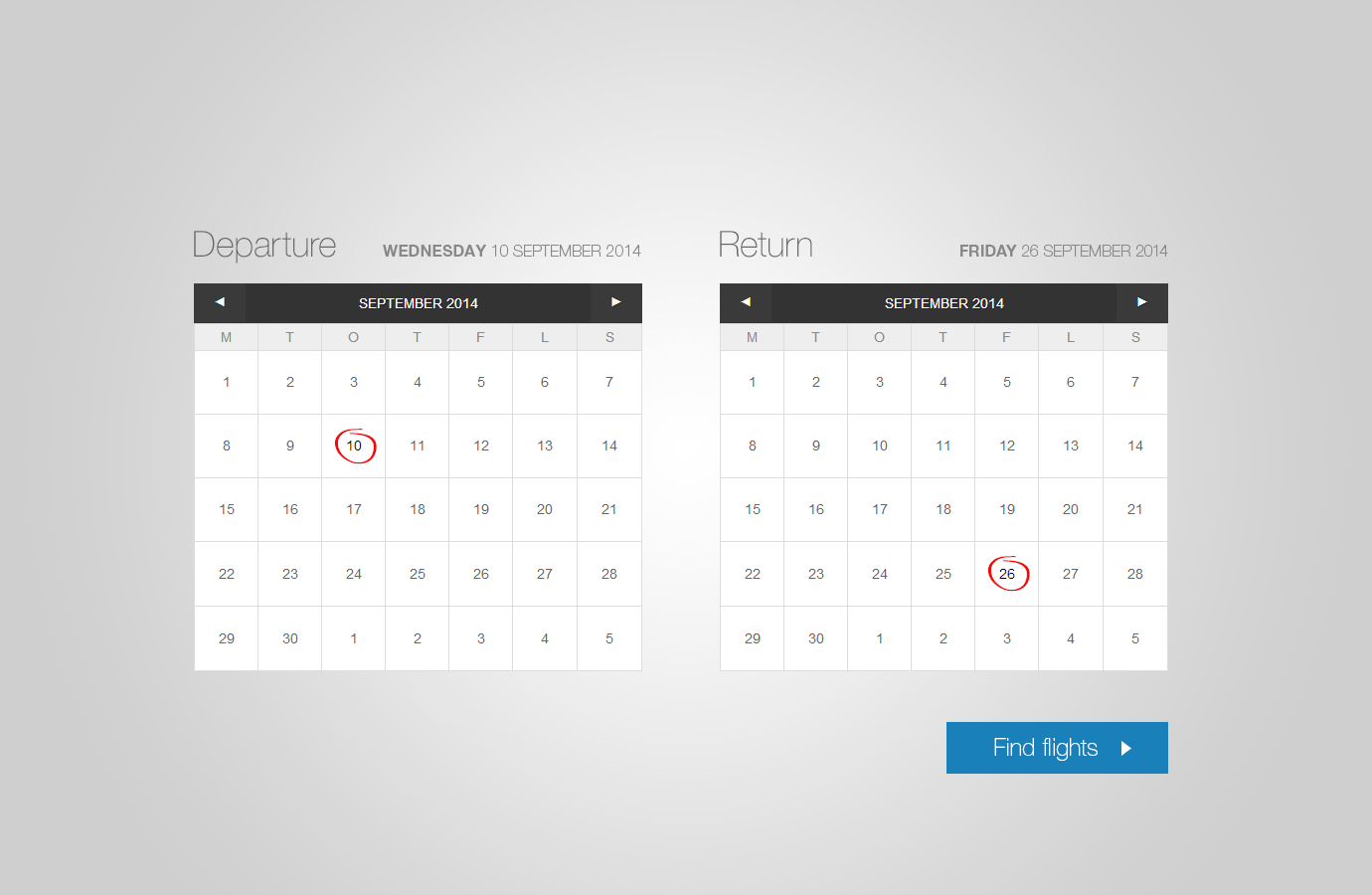 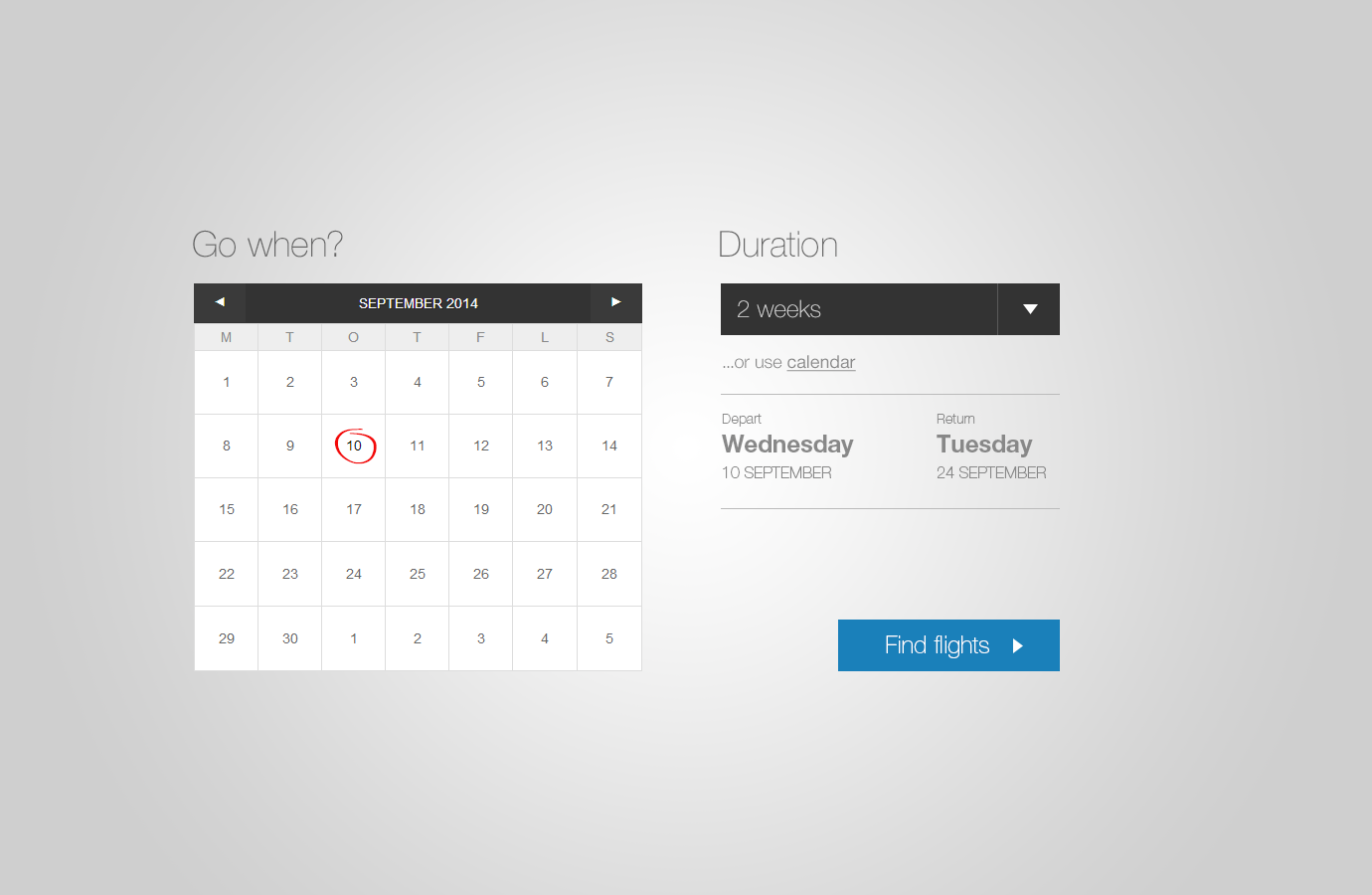 Description of the above (note the "...or use calendar") 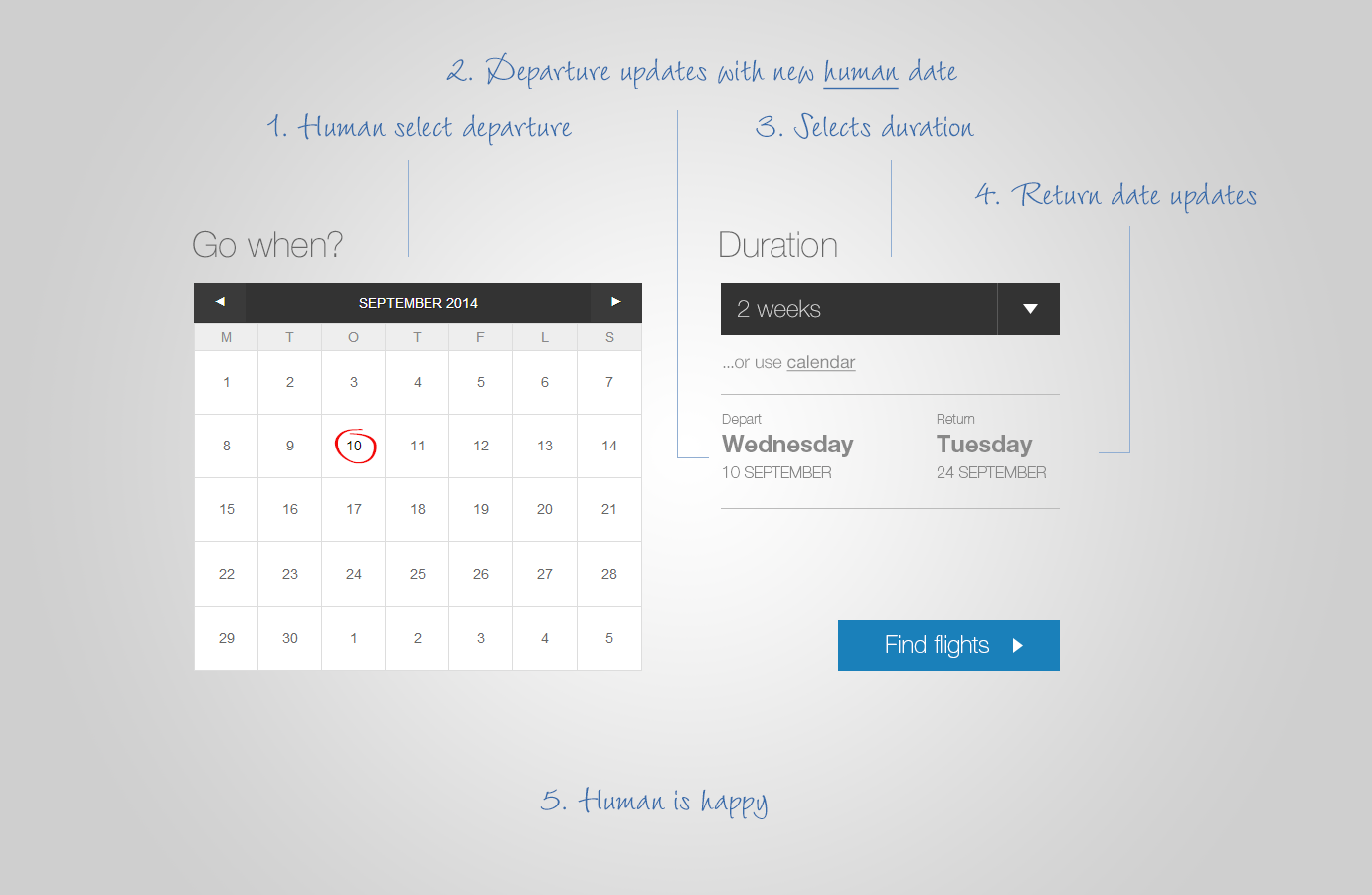 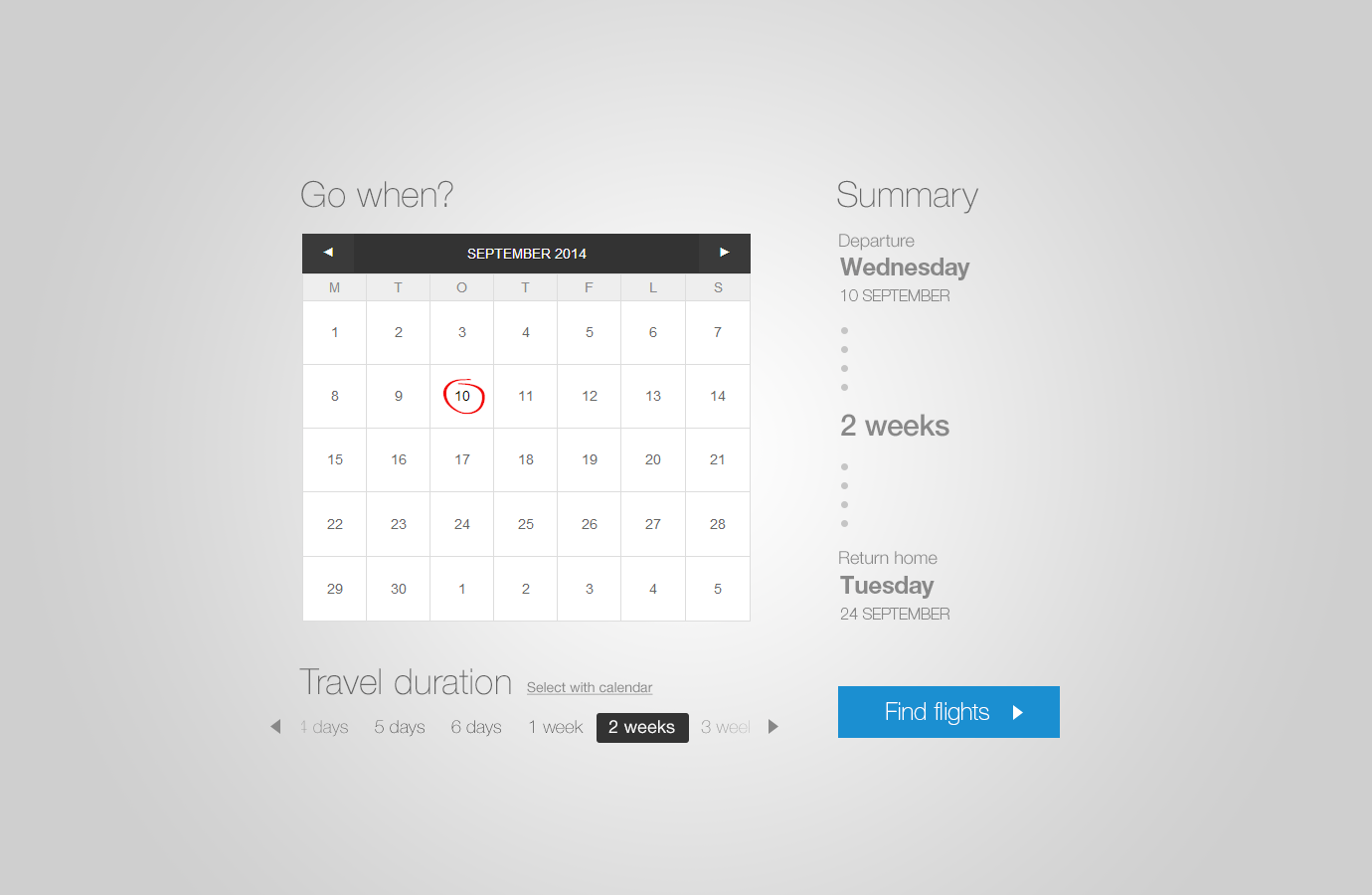 iPhone 4 example. The iP4-version was created to check how well the ideas can fit within smaller viewports. Not sure about the "Back"-button stuff. It may be better to leave the date range selection outside the calendar view instead of incorporating it within the same view. 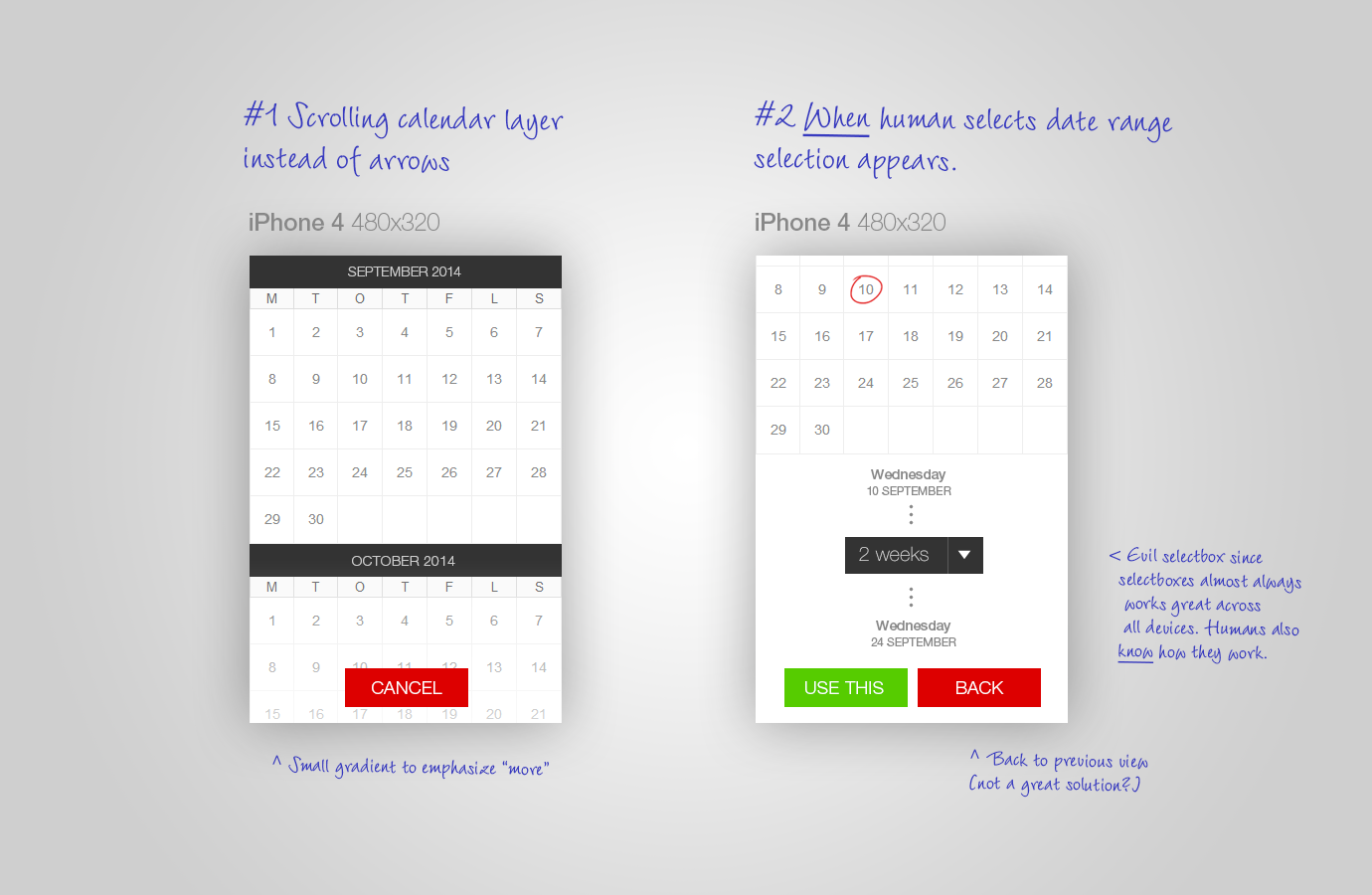 The reason why the two calendar approach has been adopted so widely and is so convenient to use is because it is in sync with the users' thinking process i.e. when people go for booking a ticket, they know the dates for departure and return of their travel but are not often consciously aware of the duration of their stay. Making them state the duration (and hence, mentally calculate it first) increases the short-term cognition load. Also, say I'm departing on the 10th and returning on the 17th, I'm going to pause for a moment and think whether I type in 7 days or 8 days as the duration^

If you're still insistent on changing the interface (yes, the current version is boring) you may want to go with the approach which @user43251 stated but by giving it a more intuitive feel by implementing the below detailed approach 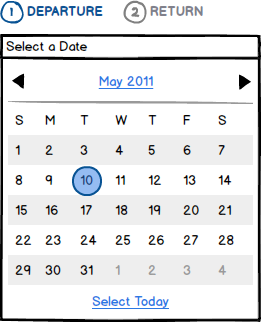 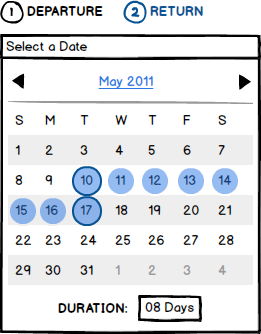 I have specifically selected this approach because there is no confusion as to what a click will do (after selecting both dates once). In this approach one can easily edit the return date easily if there was a mistake in initially selecting it*. Also, there is a field at the bottom indicating the duration where the user can also manually enter the duration (if you feel so, you can highlight this area more using colours and type)

To make the UI more interesting / visually appealing, you can implement the bold/large text details and mess around with the typography as you've done in your mockup. Something like this probably: 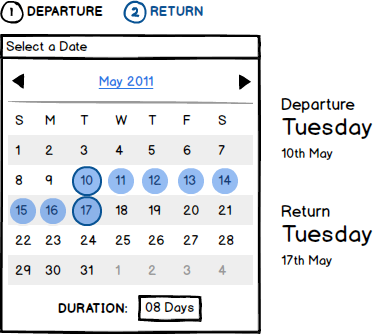 *unlike the one at http://jsfiddle.net/IrvinDominin/LALED/ where the journey period is the one between the last two clicks (discards previous clicks and thus punishes a user for entering the wrong information by making him enter it again. And even worse, this is not obviously apparent and can be gleaned only after a few clicks)

in that case, the duration field can be highlighted more (colour, typography etc.) so that they fill that in first. the layout can also be slightly changed.

the objective of reducing the short-term cognitive load remains the same. knowing the users' mental process and designing a solution for it changes with the user base you take into account. in case you are sure about your user research, the solution suggested by @Izhaki is a pretty good one. i have done slight modifications to it according to what i personally think would be most effective. 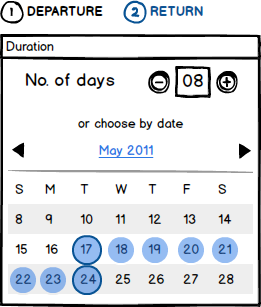 Obviously the visual design has to be improved, but the pros of this interface vs Izhaki's one are that a user can enter much a larger or smaller number without having to scroll a lot. Also the when the number of days are listed in a row they might be confusing with the numbers of the calender. (note that i've reduced the number of dates listed in the calender so that the week before departure is not shown and the next two weeks after departure are only shown. this compresses the size of the interaction element so the user does not feel overwhelmed by an unnecessarily large interface)

I think you've pretty much sold the duration idea, but I'm not sure how it would be quicker on touch devices?

Perhaps you may wish to borrow some ideas from this design: 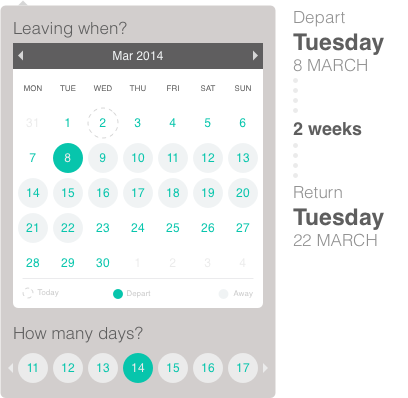 How about 1 datepicker that lets you select the departure date and the return date (the range)? 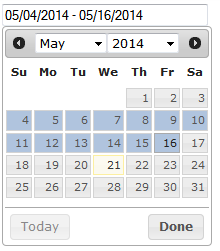 Here is a working example: