For buttons that initiate some content creation interaction, which label is better: "New X" or "Create X"? Are there specific uses that in which one is better than the other?

I would say that "New" is best in most situations, as it is short and distinct.

A good rule of thumb is to look at the other options you will have in your menu. You want to make scanning fast, so you want to make each option as distinct as possible. Here is a crude example of what I mean:

As you can see, in this instance "New" stands out more as it is the only option beginning with "N". "Create", "Close", and "Copy" get in each other's way, forcing the user to actually read the whole word.

In other words, "New" doesn't suggest that you're actually creating anything. It just sets the stage for creation. "Create" suggests that you're done and ready to turn your temporary work into a permanent object.

So, if you want to create a new Word Document, "New file" or just "New" are good, because the action gives the user a clean canvas. If, however, you've just completed a registration form, "Create" works better, because it submits the user's input into the database and creates a new object.

It is easy for designers to overthink things (and equally under-think things). I highly recommend reading this research paper:

Petrie, H. & Power, C. (2012). What Do Users Really Care About? A Comparison of Usability Problems Found by Users and Experts on Highly Interactive Websites. Proceedings of Human Factors in Computing Systems pp.2107-2116

I suspect there may be no issue with either. Create is preferred for the reasons described below (being a verb), New is conventional. Doubt any user will straggle with either, and I would go as far as guessing that if you take this to users, they might be a bit baffled, showing no particular preference. But anyway...

You "create a new document".

Create is a verb, new is an adjective.

Verbs are ideal for actionable controls, as they are in-tune with the user wish to do something, to act.

However, new is highly conventional. Even Apple use it, very oddly mixing adjectives with verbs in their menus (notice how new and Page Setup are the only non-verb options): 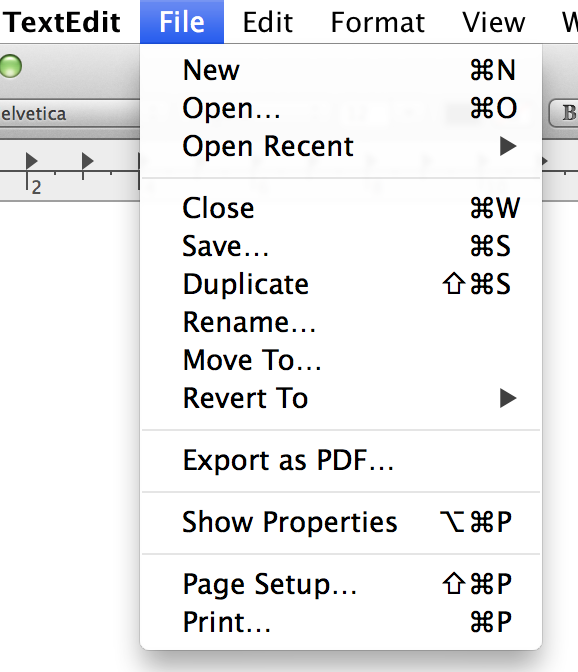 As others have stated, it depends on context.

I associate New with the creation of a new instance of some existing object, such as, a new Word document. Create on the other hand strikes me as constructing something from scratch, which may or may not involve new instances of existing objects. So, I'll 'Create' a technical guide using a 'New' word document.

I would suggest to include 'Add' as well in this discussion. We see all three at different places covering the same meaning, 'Create X, 'New X', 'Add X'.

To put it simply, this is how I, as a user, would prefer it:

I don't much mind if New is used for what I describe as Create above, and it is indeed quite common, but the other way around generally confuses me.

Then there of course are related operations Insert, Add, Attach and so on, which could be in some contexts be used for either of above.

I associate "create" with a more technical context than "new". In SQL you have the "CREATE TABLE" statement, for example. In a more user-friendly graphical user interface I see more "new" being used. Even when it isn't "new" in GUIs I see just about anything besides "create", for instance in MS Word you "insert" a table or you "add" text.

"New" has the benefit that it avoids a verb, so a user who thinks expressively will associate that directly with the desired outcome. "Create" on the other hand refers to a process that goes on top of the desired outcome and makes the concept more abstract.

I will decide depending on the UI element context.

For instance, if you are referring to a command that appears in a menu, I'd use the wording "new [something]". The file menu in most desktop applications uses the same convention, so most users will already be familiar with it and will sense what your command is doing. However, there are differences between the OS-es. For example, on Windows, the desktop/folder right-click context menu uses the "New X" approach for creating folders, shortcuts or text files. On Ubuntu Linux using Gnome (I am not familiar how is it in the other graphic environments for Linux), the convention adopted is "Create [X]". If you have right-click context menu items, it will be good to follow the established convention for the user's OS.

If you refer, however, to a command button in a form-like application, it would make sense to use "Create [X]". Usually, command buttons are expected to display a verb that best describes what the button does (with some rare exceptions seen in navigation buttons like "back" and "next" in a setup wizard).

In general, I think a good approach is one that:

If in doubt for a certain element, the decision then would be to what you need to emphasize on - the purpose of the item (hence make it familiar to the user sticking to the conventions he should already be accustomed to), or the natural fluency of the item in regard to the other user interactions.

Here are some examples;

There can be times when state management requires records to exist in order to verify rules are valid. In these cases the user is creating.

When you type in a status message in Facebook. You are entering a "new" status update, and it is "created" when it's submitted.

I would add to this that whilst you might think new / add / create are all equally viable. You won't know unless you test with users.

Recently I worked on a system where we used "create" in the context of a computer network. Our developers all thought "create" made sense, it made sense in their mental model. Their view was "the user has something they need to create".

However, during usability testing the users were confused, they argued they were no "creating" a network because the network already existed, in their mental model they were "importing" a network from a file, or "ingesting" it.

Whilst it might seem like semantics, talking the users language is critical, so my answer is that you can't find the answer to this question here. You will need to go and find what works best with your users.

"Create X" is the right label to initiate content creation.

Create X: A user may require to perform one or more steps to complete the "Create X" task, where as "New X" is a single click to open a page/workspace/file.

Create X: when you need to put effort into creating something - may involve some inputs without which you cannot create. Create X can appear outside the context of X as well.

New X: New, when the creation is instantaneous. New when you already in the context of X's parent.

Not the answer you're looking for? Browse other questions tagged buttons copywriting labels naming or ask your own question.

5
Wording for “select folder which we're going to create a folder in”
20
What are the rules of using ellipsis on buttons
6
Is there a better label for the “OK” button in message boxes with just one button?
15
What do you think is a better label “New” or “Add”
2
Standardizing button naming in a website
12
How to indicate this button/link opens a new tab
3
Best position and labels for buttons on an order creation page
1
Button or link for new item form
1
When to use Add, Insert or New
2
Useful label for message box cancel/close button