I work on a list builder component that the user must be able to build easliy, save and re-open if needed. I precise that only one list can be active.

I didn't find any similar component on the web, here is my own concept mockup.

Do you have any idea or any example in mind for a similar component ? 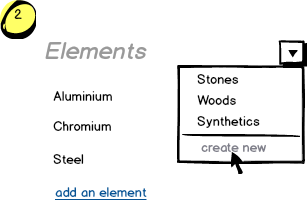 I think it would make more sense to force the user to create the list first, rather than create the elements under it. You can name the CTA "Create a list" if none exists. Then, once at least one list exists, you can keep your "Create a new list" inside the drop down at the end like you did on your mockup.

Then the "Add an element" could be called "Add a metal" so the user knows what he is adding.

Then the fact that a list has been modified should be transparent to the user, he shouldn't have to save the list or anything : as soon as he has added a new "element" to the list it should be saved.

For removing "elements" of the list, I think it's easy enough, but I would maybe place it a bit further on the right hand side so that the user doesn't click on it by mistake while manipulating the drop down menu.

Not the answer you're looking for? Browse other questions tagged lists interface user save inline-edit or ask your own question.

4
Allow list box to expand to browser height?
4
Advice for designing a multi-vendor product list
7
Conditional ordering of a thread list, cognitive load?
1
How to present a list of sentences in a beautiful and useful way
1
How long does it take a user to find and click an object in a list?
5
Represent and edit object graphs with standard OS UI elements
5
Alternative to this dual list UI
1
Examples of saving a built search and getting results that update?
4
Evaluate vs Save