Is it a good or bad idea for a video player to have the play button in the top-left corner?

Do you think it is a good or bad idea, and why? Also, why do you think Comedy Central (e.g., The Daily Show) put their play button in the top-left corner instead of the middle? 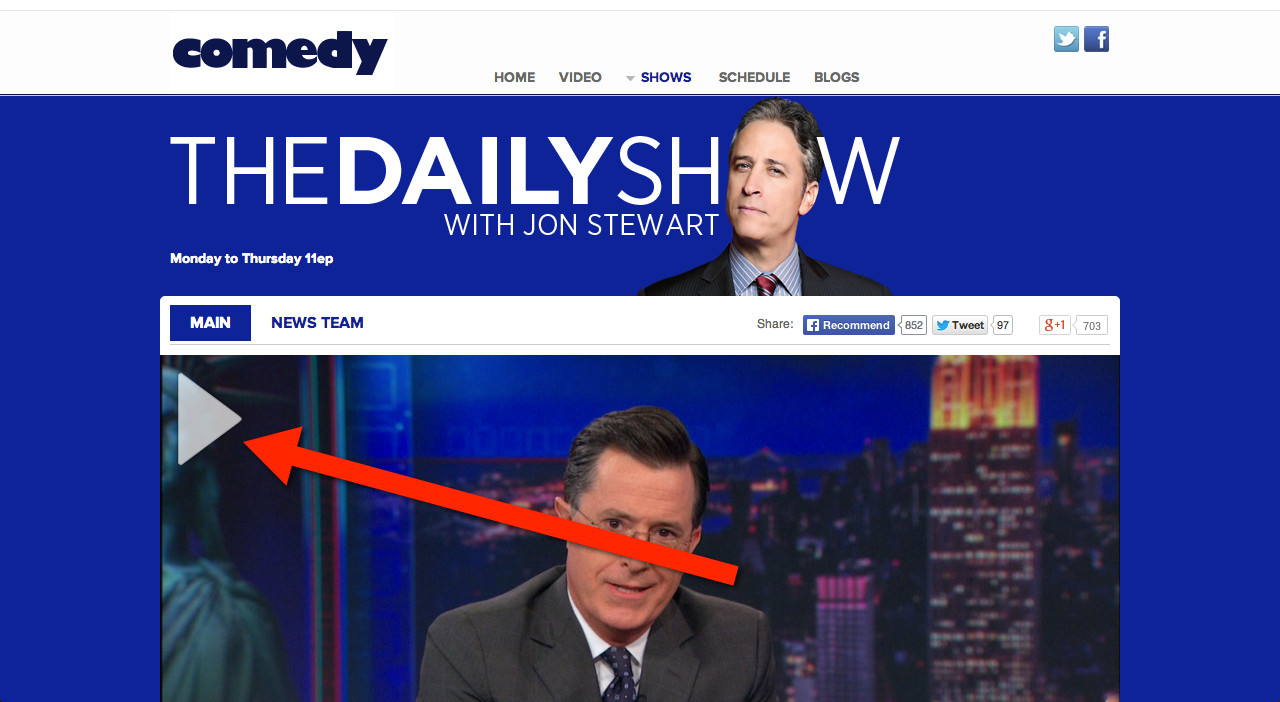 When looking at an image, the user tends to start from the center as it's the main focus point. I would opt to put the play button in the middle to ensure that the user knows its not a picture and it is a video. By putting the play button at the bottom the user may think its a picture.

Youtube (which one would argue is the most well known online video site) puts the play button in the middle, so one would assume that most users would be expecting this.

It depends on the context. If you've started watching the content, and then pause, the play button should be centered, and the video image could be darkened to show it's inactive.

I tried taking a look at the site, but as I'm European it won't let me see the actual video. What I did see though, was a bunch of thumbnails/links. And in those cases, yeah, I understand they moved the arrow. Compare their solution with a mockup of centered triangle: 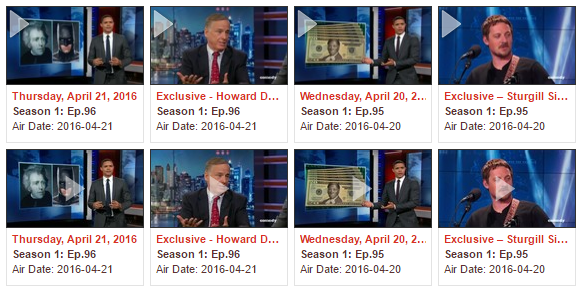 In half the cases the triangle covers up a face. 75%, if we count Batman. That both makes the face unrecognizable, and it makes the triangle harder to read clearly. By moving the icon to a corner, you have much less interference between the focal point of the video/shot, and the triangle indicator.

The same logic would apply to a large video (before watching). Moving the triangle keeps the center of the image clean, which makes for a much nicer looking page. And if they do keep the triangle in the corner as play/pause indicator, that's for internal consistency.

As for why the top-left corner; western cultures read left-to-right and top-to-bottom, so it's the first corner we look at.

As a sidenote; have you ever paid close attention to YouTube? On search pages and channel listings the triangle isn't anywhere to be found. It's only on actual videos. YouTube doesn't need the triangle to signify that something's a video, because it's a video site.

This site doesn't quite have the same affordance (all content on this site is video) but it has a similar affordance; the daily show is a TV/video show.

Not the answer you're looking for? Browse other questions tagged usability video pattern-recognition or ask your own question.

10
Flipping cards, good or bad idea?
2
Demonstrating that Audio and Video can't play at the same time?
3
Is an off-canvas slideout menu usable when placed on the bottom-right instead of the top-left?
2
Video in Email - Triangular Play Button or "Play Video" Button?
5
Filters Placement to the left or top?
5
Should a 'delete image' button be on the top-left or top-right?
2
Is it a good idea to play a [mute] video in the splash screen
2
Fast-forward and Rewind on Console video apps: what's the best way?
1
Is a good idea to mute a video on scroll/tab change?
2
Looking for guidance to resolve a difference of opinion - play button on image that is not clickable