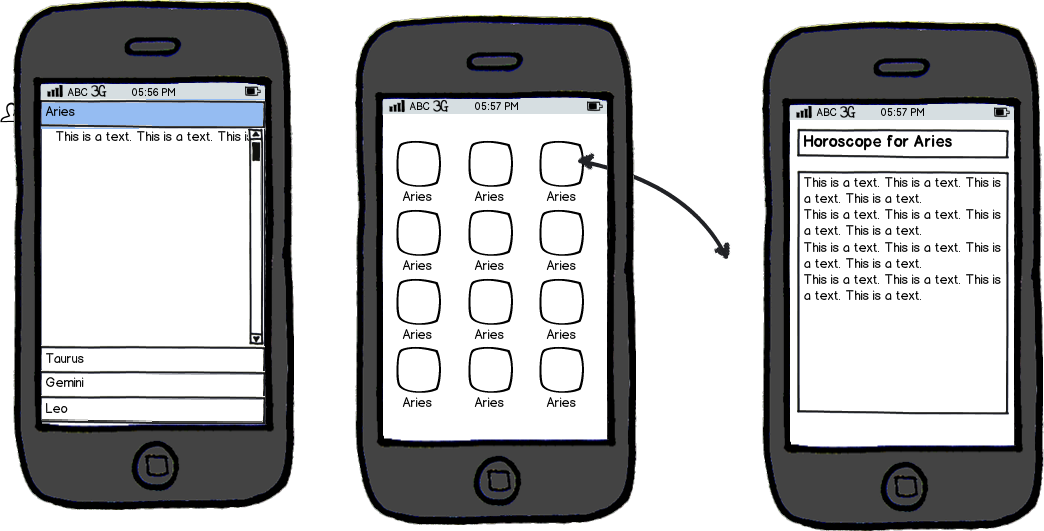 I want to make horoscope Android applicaiton, and I'm not sure which navigation I should use.

I'm thinking about these two options:

In the first option user would be able to swipe left or right to open full horoscope text for next or previous horoscope sign.

Also, I am thinking that I should give user possibility to drag their horoscope/zodiac sign to top of both lists.

The application is intended for the average user who likes to read horoscope on a daily basis. Length of full horoscope text for daily horoscope is about 4-5 sentences, while weekly or yearly horoscope have few more sentences. Application should also be optimized for the tablet.

That could depend on what the application is for, but I think the one with 12 icons could be better, since a user often only cares about his or her own horoscope. In the first option, you could save the horoscope user chose and jump directly to that horoscope next time he or she opens the application. The second option is also harder to use if the text is scrollable. If you touch the text field, you scroll the text, while if you touch the cells below, you scroll the table. That's not a conflict, but could still be frustrating. In addition, the first option could have larger areas for beautiful horoscope icons, and a beautiful background behind them. The second option, on the other hand, could be kinda boring.

One advantage the second option has over the first one, though, is that if the user actually cares about multiple horoscopes and the text field is short, the second option would be more efficient since the user could leave several cells open and read all of them without switching view.

Not the answer you're looking for? Browse other questions tagged mobile navigation android mobile-application or ask your own question.

9
UX idiom for closing activity: X-icon vs up-button vs back button
3
Master details form in Android
4
Trying to build intuitive simple user interface for an iphone app
0
User profile design for mobile appliation
2
Scrolable Tabs or Navigation Drawer for navigation in Android app?
5
best practice for Android ActionBar filtration
1
How to link an article excerpt to the full article?
0
How to navigate between pages that show continous data?
2
How to choose menu animation style?