Is there a better metaphor for a single-use checkbox?

I'm using a checkbox for a setting in a mobile app that has a one-time effect: that is, you turn it on, it has the effect once, and then resets itself to off. I'd like to know if there's a better style of control, or a visual metaphor I can use to make it clearer that the behaviour is not like a normal checkbox (where you check it and it stays on).

If you're having trouble understanding what the control actually does, here's some more background. This app shows a dialog with a list of possible actions to take, and lets the user create rules. If the rules match the current situation, one action is taken automatically and the dialog isn't shown. In case the user creates a very broad rule they later want to override with a more specific rule, there's a "manual override" control that turns off evaluating rules for the next time the rules would run. This means the dialog will show again, with the matching action highlighted, so the user can use the same workflow to create a new rule, instead of having to go through the external "rules editor" workflow.

One alternative I've already considered is the slidey switch control (what Android calls a Switch), but it has the same problem: users wouldn't normally expect it to switch itself off. If you're going to suggest a switch or checkbox, make sure to justify why it's not a problem to break the user's expectation of persistence. I'll try to make the behaviour clear in the text label in any case, but the right affordance can be worth n words for large values of n.

I think a standard button may be a better choice for this. You press it to execute an action, but it doesn't persist in an on state. It matches the metaphor. If possible, once the switch is thrown (or once the button is pressed), the user should see (instantly, optimally) that changes have taken place. If they can, the button no longer has to carry the communication.

This would be similar to a "clear filters" switch.

If you want to get skeuomorphic, you can show this as a springloaded button that, once pressed, snaps back into place.

Essentially you are queueing up a behavior to executed once. Perhaps a better metaphor for this might be a kind of "up next" list that contains the behavior. Something very roughly like this: 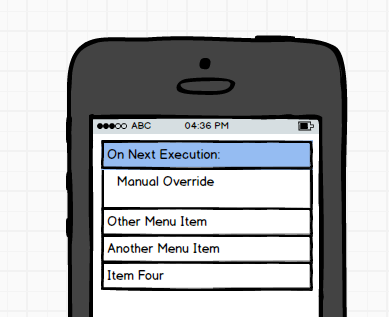 Not the answer you're looking for? Browse other questions tagged checkboxes metaphor or ask your own question.

7
Multiple or Single Checkbox for ToDo List?
4
For online HTML based quiz question forms with single answers vs multiple answers, should I use radio button or checkbox?
158
Why is it impossible to deselect HTML “radio” inputs?
6
Single checkbox or yes/no radio button
6
Is there a widely-understood visual metaphor for privacy?
2
What visual metaphor is this checkbox trying to achieve?
1
Accessibility Guidelines for saving changes to boolean controls in a web app
3
How to indicate the ternary options for turning a feature on, turning it off, or leaving it as it was?
1
How to indicate an unfinished task with a check box or similar without implying you can check it off yourself?
2
Progressive Disclosure: Checkboxes vs Switches