How to display data that spans multiple rows (tabular data)

Sorry for the weird title (I have no idea how to describe it better). Right now we have a user interface for showing specific dates in a tabular way, for example:

This is working "fine" at the moment, but in the next version we would like to display the difference between the two dates as well, so someone had the idea to display it like this:

However, I'm asking myself if this is a good design. I'm questioning myself is displaying this is as tabular data is still a good idea or not (because now we have "inter row data" as well).

However, I'm not finding a better way to represent the data either, so I was wondering if there's a good practice to display such data and if showing it as tabular data is still the right way to represent it.

If you prefer to display it as a table, I would use table headers. You mentioned that dates could be related to each other. It's better to combine those dates to one, so each subject has it's own row.

The most intuitive way to show how dates relate to each other on a timeline is to use some kind of date grid, where your rows become squares in the grid. 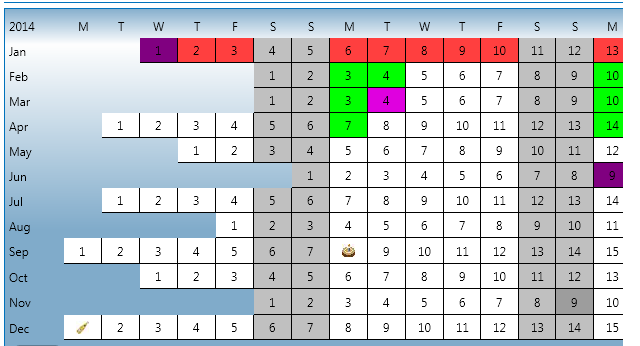 or if the dates are close together you can have rows for each name, and then a square indicating date. The relationship will be obvious then.

Not the answer you're looking for? Browse other questions tagged tables dates or ask your own question.