I am designing a dialog which would allow user to transfer credits from his account to "an object's account". Transfer is only in one direction -- after you confirm transfering credits to an object's account, you can't retrieve them.

Dialog has two buttons showing numbers of credits on both accounts -- user's and object's. When dialog opens, it has focus on middle textfield, where you can enter number of credits to transfer.

While you are changing the number, number of credits on "Your account" changes accordingly to show how much credits you would have after the transfer. You can increase number in the textfield by clicking either the arrow or button below "Object's account". But despite the fact of clicking the button, number on it doesn't change -- only textfield value changes. I didn't want to repeat the information about number of credits being transfered, according to DRY principle. 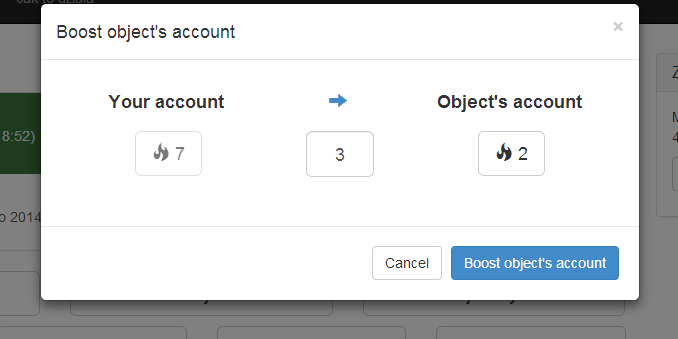 To be clear, I was inspired in part by Minecraft trading interface (screenshot below) as I wanted the dialog to be similar in look and behaviour (in sensible way) to it. 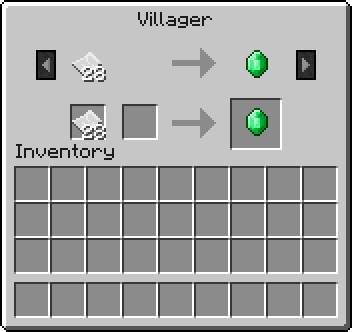 My question is: Would presented design of dialog be clear and comprehensible for average user? I'm looking forward to comments and suggestions / improvements.

If I am reading the description correctly, a person cannot type a different number into the text field that is in focus? If that is the case, that should be changed as placing that field in focus implies that the user doesn't have to use their mouse.

One idea would be to allow the user to type whatever value they want into the field, and then show updated numbers for both accounts below the originals. 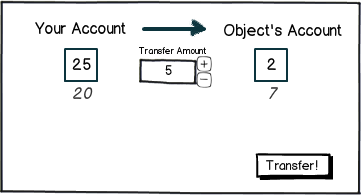 I would change the arrow to be something non-clickable and then add + and - buttons on the side because as it is now if someone only wanted to use mouse clicks to do this, they would not be able to lower the value of the boost if they overclicked.

It's also not intuitive that the arrow itself is clickable in my opinion so you'd be better off designing a nicer arrow with a small "transfer" written over it or something.

Something else you could consider is simply having one text box where a user enters how many credits they want to transfer, with an account balance in a corner, and then generate and display a static CONFIRMATION screen once they place submit. Making this a two step process would only be 1 additional click for the user but would give them that extra chance to check and make sure that this is what they want to do (important if the process cannot be undone).

Not the answer you're looking for? Browse other questions tagged usability gui-design input dialog numbers or ask your own question.

1
Best way to combine object selection and object editing in a dialog
3
How do I best describe a "confirm a download" in a dialog box?
0
User profile design for mobile appliation
1
What is the best way to input cm of body measures?
1
Change long "continue without saving" button to say "skip"?
4
Input of sequential data
10
Dialog - settings vary due to first selection
94
Is it possible to make a "good" options dialog?