I'm in the process of improving folder selection process of a backup software my company has developed. The goal is to have the user select the folder(s) he/she wishes to backup.

This page describes how it works today: http://support.degoo.com/customer/portal/articles/1326476-how-to-backup-files

We've found that the most common place where people get stuck is the folder selection dialog (the dialog that opens when the user clicks the "Add folder to backup"-button). Many just close the dialog without selecting any folder.

I was a bit surprised by this, since it's a standard Windows dialog that I assumed most people had seen before, but it looks like I was wrong.

What do you think is the best way to have users select multiple folders? Some ideas of the top of my head:

I am as surprised as you that users have difficulties to add a folder with this standard dialog window. But users are surprising, that is why we like them 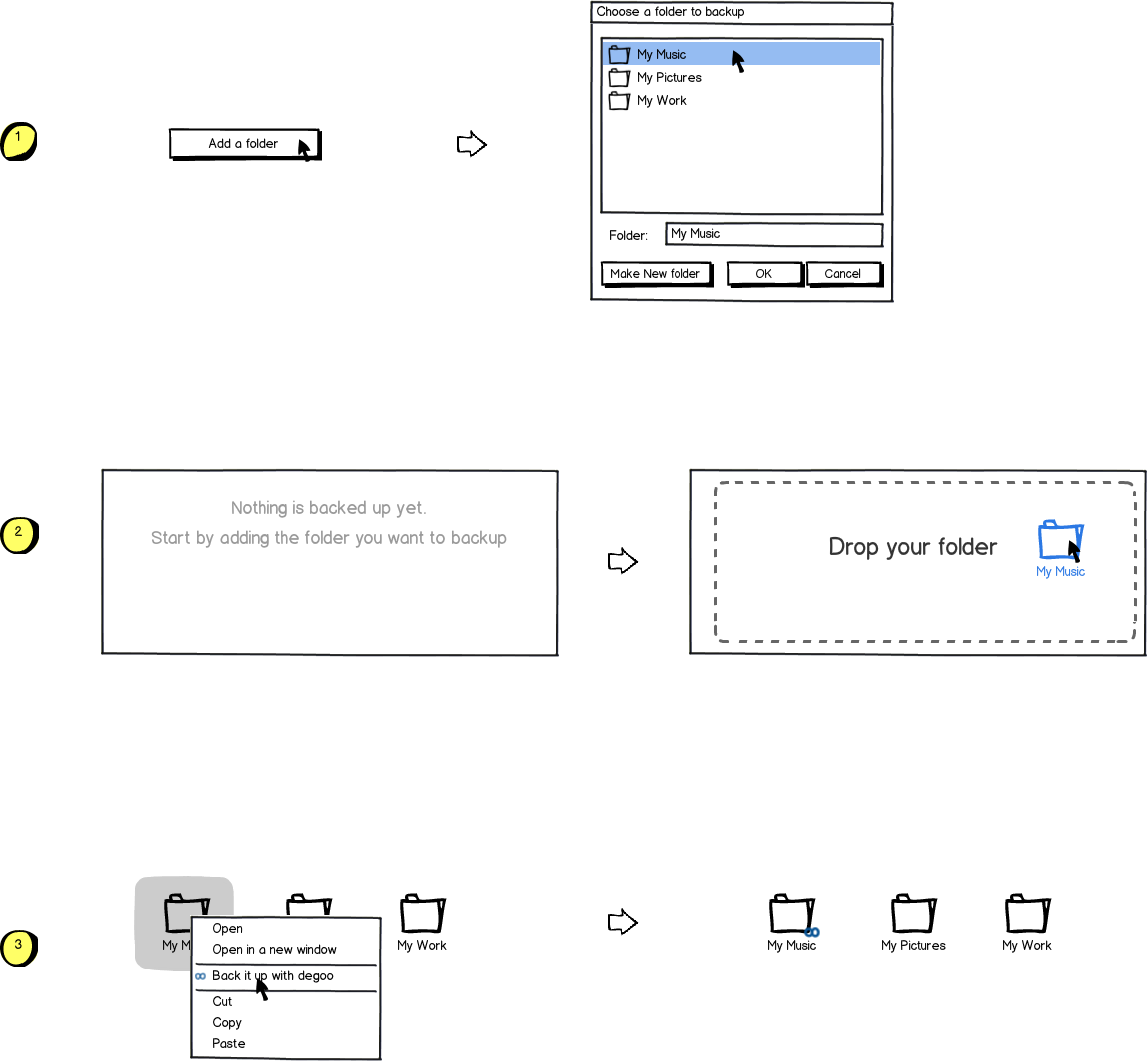 I have nothing but anecdotal evidence, but I know exactly what the issue is.

Average people don't know where their files are.

I'm going to broadly group everyone into two categories.

These people understand where there files are, can think through nested folders and easily browse what they want from the dialog you've presented. Their concerns are privacy and organization, they want control over already know the best way to do everything (for their satisfaction).

My description here is short, because the vast majority of people who will ever read this will fall into this category. We design for ourselves by default, so we rarely need to think about ourselves extensively.

If you've ever dealt with an "average" computer user and asked them what files they'd like to backup, they'll say "my pictures", "my documents". But they aren't referring to folders with those names, they're referring to the pictures themselves, the documents. Digital versions of physical items: a photograph, a stack of papers.

To worsen the problem an average computer user understands a folder hierarchy up to 1 level deep. The root for any given user is whatever folder their photo program drops them in by default, their 1 level is composed of any trivial grouping of folders they established. This is again because they think in terms of physical items, most people have seen a folder with some papers or an envelope of pictures. They've never seen an envelope inside of another envelope though, and that way of organizing things isn't obvious to them.

By doing this, you'll also protect yourself from their own error in backing up their content. This group of people may become (unjustly) angry at your service for not backing up an important document they saved to their desktop, when they only told you to backup their documents folder.

With these two groups in mind, I believe something like the following would dramatically increase your success rate. This is more work for you as a backup provider, but will allow computer users of all levels of ability to effectively backup the things they care about: 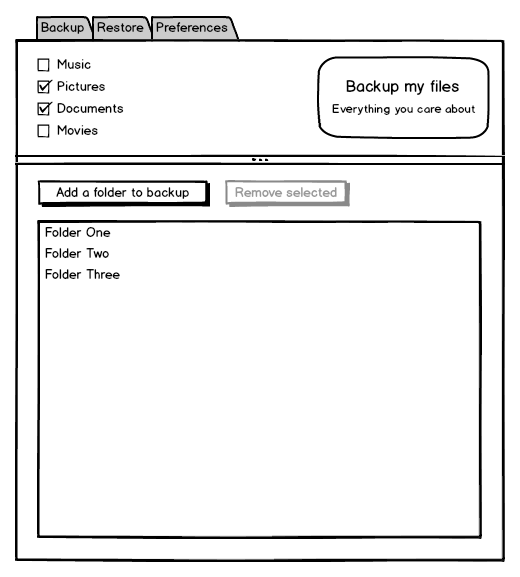 The default backup tool in Windows looks like this:

It responds to all of the four requirements, and, most importantly, does it through a single dialog. Your solution uses two dialogs to do something which is inherently related: one dialog displays the list and enables to remove items; another one enables to add them.

The Windows solution responds to an additional requirement: being able to exclude a subdirectory, while the parent directory remains selected. It doesn't look like your solution allows that.

Why are your users closing the dialog without selecting anything?

Add the most common places (My documents, My pictures, My music etc) as some easy accessible shortcuts, and let the current feature be "advanced selection" or "additional selection" of files. 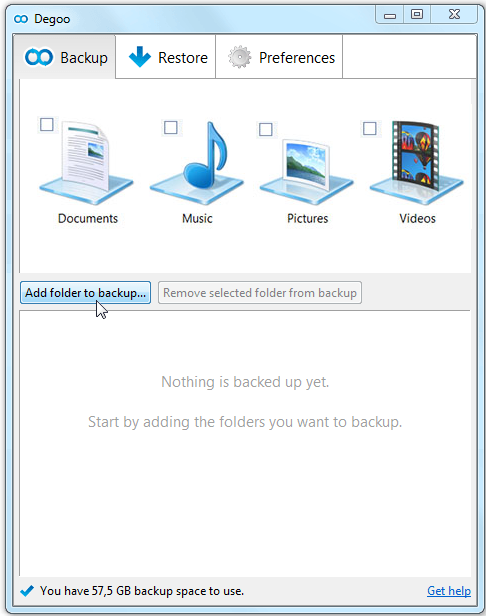 First, you may start with a default backup option enabled. Instead of starting with no backup set, assume your user installed the application to backup something, and start doing it with the most common option (Home folder?) let them know by starting the application in the backup places selection area (with the Home folder serected).

If you are unsure you can ask a question at startup, as below. Always stay in the user's perspective, not the software's ("I want to backup..", not "Choose a folder" or "What do you want to backup?"):

The [ OTHER PLACES ] button brings to the backup places selection area, where You should show the most common places/options. Note I keep calling them places instead of folders, you may find a correct term, not necessarily folder.

This is backup for people that don't know about files, folders. and backups.., they just want to save "things" from "crashes".

To skip the folders and focus on making backups of different types of files (as suggested by Jørn E. Angeltveit and AR.) might reduce the number of decisions the users have to make when starting to use the program (this will make some power users frustrated). This design is based on trying to simplify as much as possible (maybe to much).

I have skipped the tabs and hided the less used preferences and functions in "Advanced backup" and "Advanced sharing". 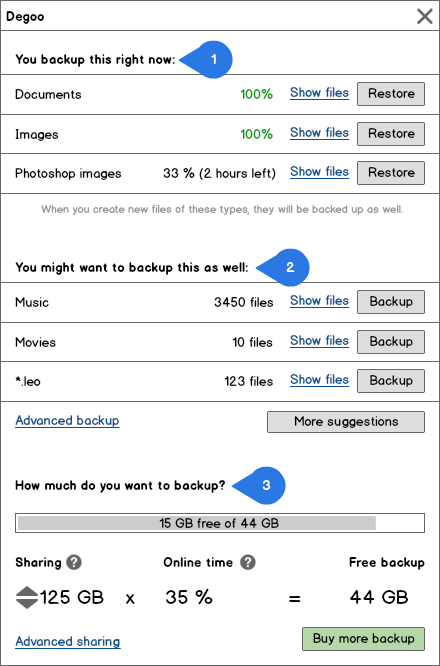 If you have to stick to backup folders, I would suggest several ways of adding folders outside the main window: 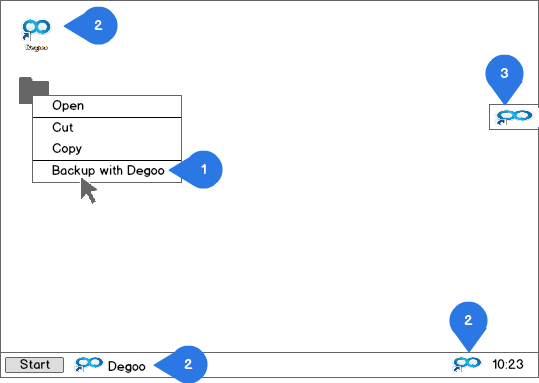 By personal experience, the context menu and drag and drop to the Degoo window is the simplest and most intuitive way of adding folders. The third suggestion is hard to get right, and I think Jing is one of few software that have made it work pretty well. I would test all of these alternatives and include the ones that is most often used in the final product.

Regarding the Selecting multiple folders:

I faced this scenario few times in my life,

simple description is should flow from the left to the right with the files(objects) on the left and selected files on the right.should also have the following control buttons, in this order, for moving objects from the source the selected area.and if we select some file it will automatically add the backup ques in bottom of the window after click backup or 30 sec time out,it will be easier to the user, each and every files folders can select or unselect using check boxes,

I suggest to try this approach: 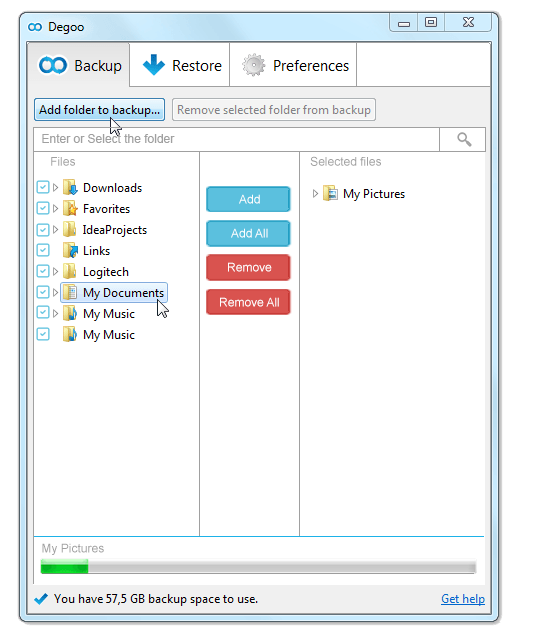 From a developers PoV:

My Music, My Documents and My Pictures are virtual folders. So they can combine folders in different devices that are not always available. From this point of view, you can never guaratee the folder can be backed-up.

I suggest to try a different approach:

With your current dialog the user cannot choose 3 folders. Even if these are in the same place ! The user has to trigger the dialog 3 times. This is really a pain. And does the dialog at least remember the (navigation) place from one time to the next time ? I do hope so.

The first thing to do would be to make this dialog allow the user to choose multiple folders — with Shift, for example.

And the selected folders would appear in the list.

Then allowing the user to add — multiple — folders to the list by drag-and-drop is a good idea.

Your idea of check boxes is powerful, but the dialog would be heavy. It would need careful explaining. The check boxes would come in the folder selection dialog. They must not come in place of the list of selected folders.

Regarding the folder selection experience: 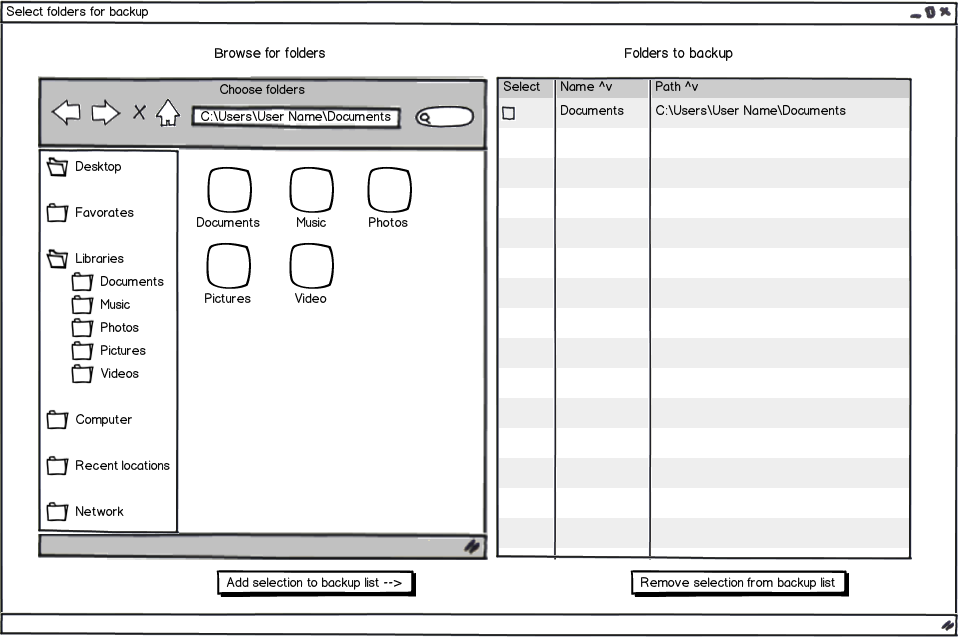 What about applications that store their data in hidden folders like %USERPROFILE%\AppData\Roaming. This even causes issues for power users. See this list for more Windows special locations.

In addition to answers above from @AR about default library locations, an immediately achievable solution is to expose these special locations in a user approachable manner

It is possible (not trivial) to build up knowledge about which applications store important data in which places. You should then default to backing up data for all known applications you detect.

A better goal (but harder to implement due to Windows installation design) would be to backup both the application binaries & data so that user could quickly get this going at another computer.